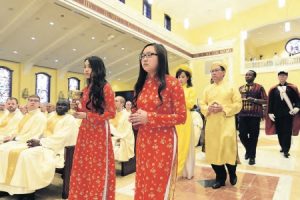 Representatives of multicultural ministries in the Diocese of Harrisburg bring forth the gifts of bread and wine at the Solemn Mass to open the Sesquicentennial Year, celebrated March 3 at Holy Name of Jesus Church in Harrisburg.

Reverencing the history, people and cultures of the Diocese of Harrisburg, Catholics from across its 15 counties gathered at Holy Name of Jesus Church in Harrisburg for the Solemn Mass opening the Sesquicentennial Year on March 3 – exactly 150 years to the day that diocese was established by Pope Pius IX.

The occasion connected the past and the present Church of Harrisburg, highlighting the anniversary year’s theme, “For a Lasting Remembrance,” taken from the Papal Bull that established the diocese in 1868.  Click here to view a recording of the Anniversary Mass.

Voices from the Diocesan Schola, musical fanfare from The Capital Brass, a Knights of Columbus Color Corps and an entrance procession of priests, deacons, seminarians, Knights and Dames of the Order of Malta, and Knights and Ladies of the Equestrian Order of the Holy Sepulchre of Jerusalem lent to the solemnity of the Mass, celebrated by Bishop Ronald Gainer.

In the pews were families and individuals, young adults and religious sisters, inter-religious and ecumenical guests, and people representing various ethnicities with roots in the history of the diocese.

In his homily, which can be read in full on pages 11 and 12, Bishop Gainer called upon the people of the diocese to recommit “to the work of the Gospel and to the unity of our local Church.”

The celebration of the solemn Mass featured insignia and vessels historic to the diocese: the Pectoral Cross worn by Bishop Gainer was handed down from bishop to bishop from the first shepherd of the diocese, Bishop Jeremiah F. Shanahan; the cathedra – or bishop’s chair – that was Bishop Shanahan’s; the crozier that belonged to the Third Bishop of Harrisburg, Bishop John W. Shanahan; and the chalice and ciborium fashioned at the direction of the diocese’s longest-serving bishop, Bishop George L. Leech (1936-1971), with donations of jewels and gold from the people of the diocese.

A reading and a hymn, offered in Spanish and Vietnamese – the latter by the Sacred Heart Choir of the Vietnamese Martyrs Community in Lancaster – as well as the giftbearers from several representatives of multicultural ministries celebrated the rich ethnic traditions of the people of the diocese. The Diocesan Schola sung works by Bernard Wert (1899-1966), who served as organist and choirmaster for the Cathedral Parish of St. Patrick for 45 years and published pieces for the diocese. 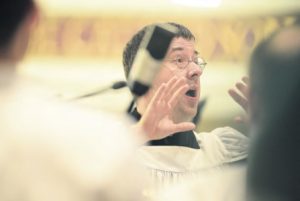 During the Concluding Rite, Bishop Gainer imparted an apostolic blessing with a plenary indulgence on behalf of Pope Francis, to those present who had received the sacraments of Reconciliation and Holy Communion.

The joyful congregation then continued the celebration of the diocese’s milestone anniversary at a gathering in the former Holy Name Church featuring a wealth of food representing the various ethnicities that make up the local Church. They included the Black Catholic Apostolate with soul food and food from the Democratic Republic of Congo; the Hispanic Apostolates of St. Francis of Assisi Parish in Harrisburg and Immaculate Conception of the Blessed Virgin Mary Parish in York; the Italian Apostolate; the Vietnamese Apostolates from St. Anne Parish in Lancaster and Our Lady of the Blessed Sacrament Parish in Harrisburg; the Kolo Club “Marian” of Prince of Peace Parish in Steelton; St. Ann Byzantine Catholic Church in Harrisburg; and the Harrisburg Diocesan Council of Catholic Women, whose members provided baked goods and coffee.

Enjoying the festival of food, Mary Jane Corl of Our Lady of the Blessed Sacrament Parish in Harrisburg and Kathy Piaskowski of St. Joseph Parish in Milton struck up a conversation as they met for the first time.

“Today was such a beautiful Mass, with moving music and an inspiring message from the bishop. The whole experience was just glorious,” Mary Jane said. “And to follow it with this gathering here is just lovely. The food and representation of ethnicities are just incredible. Everything today made for a wonderful celebration.”

A member of Our Lady of the Blessed Sacrament Parish for 50 years, Mary Jane remarked the diocese’s anniversary celebration prompted her to reflect on significant occasions in her faith life, including her children receiving the sacraments. “I see how my experience in the Church connects to the history of the diocese,” she said.

Kathy, who came to the anniversary Mass with several other members of St. Joseph’s in Milton, said she did so because she “wanted to share in the celebration of the history of the diocese.”

“The Mass celebrated our history, our different cultures, different music, different languages, and the fact that we are all one,” she said. “That’s what makes our diocese so wonderful. No matter our age or nationality or experiences, we are all together as one Church.”