A Diocese is Born 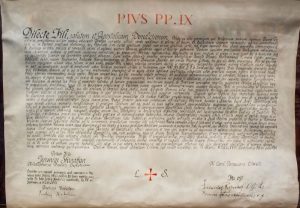 On March 3, 1868, Blessed Pius IX, accepting the recommendation of the Second Plenary Council of the bishops of the United States of America, issued a decree establishing the Diocese of Harrisburg. The decree, translated from the Latin, reads:

“Wherefore, in keeping with the counsel of the aforementioned Cardinals [Sacred Congregation for the Propagation of the Faith], and exercising Our Full Apostolic Authority, we hereby establish and constitute in the City of Harrisburg a new Episcopal See, under the care of its own Bishop, to be known henceforth as the ‘Diocese of Harrisburg.’ We wish this diocese to include the civil counties of Clinton, Centre, Mifflin, Franklin, Adams, York, Dauphin, Cumberland, Northumberland, Columbia, Lebanon, Lancaster, Montour, Union, Snyder, Juniata, Perry and Fulton.”

Named to lead this newly established diocese was Bishop Jeremiah F. Shanahan, a 34-year-old priest and seminary rector from the Archdiocese of Philadelphia. By 1868, when this new diocese was established, Catholicism already had a long history in the New World. Through the years, Catholics residing in what is now the Diocese of Harrisburg have been successfully under the jurisdiction of bishops of four dioceses.

After the War of the Revolution, Father John Carroll was appointed superior of the American missions in 1784. In 1790, Baltimore was established as the first U.S. diocese, and Father Carroll was consecrated the first bishop. His diocese included the original 13 colonies until the dioceses of Boston, New York, and Philadelphia were established in 1808.

When the Diocese of Harrisburg was established, it was home to about 25,000 Catholics in an area of 10,000 square miles. There were 61 worship sites, including churches, chapels, and stations. Of the 61, 20 were parishes with pastors in residence. Nineteen diocesan priests and three Jesuit missionaries were serving in the diocese. There were seven parochial schools and one academy. Nuns from three orders – Sisters of Saint Joseph, Sisters of Saint Francis, and Sisters, Servants of the Immaculate Heart of Mary – were in residence.

Though the overall population of the new diocese was small, its establishment with Harrisburg as its center positioned it with advantage. St. Patrick Church, Harrisburg, located at the site of the present Cathedral, just about 200 yards from the capitol building, became the procathedral. Its location on the eastern bank of the Susquehanna River situated it along a major travel route in the state.

This site for St. Patrick Church had been chosen in the 1820s to serve the large population of Irish immigrants who had settled close to their work constructing the Pennsylvania canal along the Susquehanna River. When the church was selected as the procathedral, the name was retained, and St. Patrick was named the patron of the diocese.

Bishop Shanahan was keenly aware of the need for more priests. His background as a seminary rector prompted him to establish a seminary in the new diocese. To this end, he purchased the Sylvan Heights property in eastern Harrisburg and in October 1883 opened a diocesan seminary, directed by Father Massimo Cassini, in the mansion on the estate. He also had the bishop’s residence relocated there. Sadly, the cost of maintaining a seminary proved too great for the limited resources of the diocese, and in 1886, the year of Bishop Shanahan’s death, the seminary closed.

The property continued to serve as the bishop’s residence until 1901, when the orphanage for girls replaced it on the site.

Bishop Shanahan recognized the importance of having a formal Catholic presence in the burgeoning communities throughout his see. When the diocese was erected in 1868, of the 18 counties, four were without even a mission station: Fulton, Juniata, Perry and Snyder. Four more – Columbia, Cumberland, Mifflin and Union – had only chapels or stations, which were attended by clergy only several times a year, some as few as three times a year.

Lancaster, the county with the largest Catholic population, had five parishes. Dauphin and Adams counties each had three. York and Northumberland each had two. The remaining counties – Lebanon, Franklin, Centre, Clinton and Montour – each had just one.

In 1868, the churches also reflected the Irish and German backgrounds of the majority of their parishioners. Of the 20 parishes, three in Harrisburg, Lancaster and Columbia had been established as German; all the others conducted their day-to-day affairs in English.

Click here to explore more history of the Diocese.

Bishop Shanahan devoted much effort to establishing a Catholic worship site in communities throughout the 18-county diocese. During the 18 years of his episcopacy, he opened ten new parishes, elevated seven missions to the rank of parish, and appointed resident pastors to a number of missions.

One of the strongest areas of growth in these years was the northern portion of the diocese, where, until the 1860s, the Catholic population had been extremely low. The sparseness of a Catholic population up until then is generally acknowledged to reflect the anti-Catholic sentiment of the area. In the 1870s and 1880s, many immigrants from eastern Europe, enticed by the promise of work in the coal mines, settled there, forming a number of ethnic parishes.

Today, the Diocese of Harrisburg continues to flourish, serving close to 245,000 Catholics in 89 parishes and seven missions throughout 15 counties of central Pennsylvania.

(This historical information was gleaned from diocesan resources and the 2006 book, “Highway of Missionaries: An Illustrated History of the Diocese of Harrisburg.)