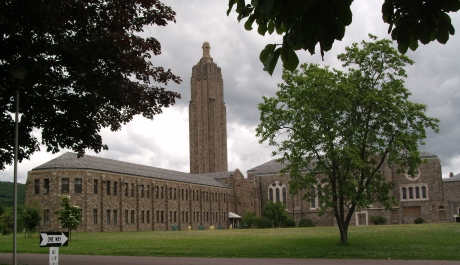 The Motherhouse of the Sisters of Saints Cyril and Methodius in Danville.

(Sister Pamela Smith, a member of the Congregation of the Sisters of Saints Cyril and Methodius, offers this piece on her vocation journey as a means of reflection during the Year of Consecrated Life currently being celebrated in the Catholic Church.)

For several consecutive Lenten Sundays, I’ve been at the Mass in Spanish in our parish. I’ve also attended Mass in English with the five other sisters who are part of our local community, but I have some personal reasons for wanting, periodically, to sing from Flor y Canto and to respond “Y con tu espiritu” when the priest says, “The Lord be with you.”

One reason is simply to remember that the Church is catholic, with a small “c.” Another is to encounter once again a worshiping community in which language, culture, and faith seem to be so smoothly blended, something which is not always apparent in Anglo environs. A third reason is to witness evident zeal for the gospel, which appears in vigorous preaching, spirited music (accompanied by piano, guitar, percussion, and saxophone), an expanse of multi-generational families stretched across pew after pew, and gestures of devotion like the praying of the man who kneels in the middle aisle before Mass with his arms extended cruciform.

But the most profound reason for my wanting to participate once again in the Spanish Mass has to do with nostalgia and a reclaiming of roots. In 1971-1972 I lived in Bethlehem, Pa., in a neighborhood which was rapidly becoming Puerto Rican. I was amid one of those late 1960s/early 1970s searches for self, soul, meaning, and a modicum of sense. The U.S. was in upheaval, and it was the heyday of flower children, wildly painted Volkswagen buses, and war protests. Anything that smacked of “the Establishment”— government, Church, educational systems, business, industry — seemed suspect.

To give a very abbreviated version of what happened that year, I would have to say that some key events propelled me into a major change of lifestyle: challenges from my Baptist and Mennonite friends which led me to read Sacred Scripture deeply and extensively; an experience of Church at its best among the Puerto Rican people who attended Holy Infancy; the impact of living in an impoverished neighborhood where family meant more than achievement; a realization that helping the world become a better place was not so much about what to do but Who to follow.

I realized that the one and only one who had the secret to transforming a planet which seemed bent on destruction was Jesus Christ. Once that struck home, I experienced the revival of a sneaky feeling that I might be called to religious life. It was a thought that the friends who had seen me through college, graduate school, four years of a teaching career, Friday nights at the Red Garter in Philadelphia, Saturday nights at the Main Point in Bryn Mawr, and attire purchases of kaftans, dashikis, tie-dyed T-shirts, and bell-bottoms found either laughable or unthinkable. The only ones who thought I might be a tad serious about convent life were the ones who had detected my undercurrents and outbursts of idealism.

In any case, attending Spanish Masses 43 to 44 years after I moved from South Bethlehem and 40 years since I professed vows also serves as a reminder of how I arrived at where I have been and where I am.

And Then There’s a Community

The Sisters of Saints Cyril and Methodius were a community I had encountered twice, first in the second half of grade school when we moved from New York to Berwick, Pa., and then, one summer, in graduate school at Villanova. I was an educator, and I knew that they were too, but not in the mode of stuffy academics (part of the Establishment that I wanted to eschew). They were devout and companionable and down-to-earth. The SSCM’s I had met in both settings were good-hearted types with a notable sense of humor. Once I entered, I also learned that the sisters’ Slovak ethnic roots in many ways mirrored what I had treasured in my Puerto Rican neighborhood: an integration of faith and culture and everyday expressions which praised God in greetings, invoked God’s will when future possibilities were discussed and mentioned God in farewells without contracting “God be with you” to “Goodbye.” There was poetry, art, music, and stitchery that bespoke both native land and native religion.

As I’ve lived with the sisters now for more than four decades, I’ve found that the community’s core mission has as much relevance and urgency as ever. Over the years we have developed a shorthand which gives contemporary expression to the purpose articulated at our founding in 1909—the 4 E-s: evangelization, education, elder care, and ecumenism. We’ve also internalized, as well as written into our Constitutions, the reminder that, as consecrated women, our primary mission is the witness of our lives.

We’re about prayer, community life, and service. The whole impetus is what the Church calls sequela Christi, the following of Christ.

That has led us many places since our founding in the Diocese of Scranton. We’ve traversed to Connecticut, New York, New Jersey, across Pennsylvania, into Ohio, Michigan, Indiana, Illinois, and down into Delaware, South Carolina, and Texas. We had a brief stint in Slovakia, after the collapse of Soviet Communism. We are in seven states to this day. Our neighborhoods are and have been urban, suburban, coal town, and rural. We’ve been in long-established institutional settings and start-up schools and missions.

The South Carolina six, among whom I serve right now, have helped birth two new schools and have taken on an outreach center which touches the lives of the elderly poor, the resident Gullah population, and Spanish-speaking immigrants and migrant workers.

In many ways, our lives as women religious has replicated the more than 100-year history of our SS.C.M. community and the history of sisters in the United States. We’ve moved, we’ve changed, we’ve prayed, we’ve celebrated, we’ve improvised, we’ve retreated, we’ve renewed, and we’ve surprised ourselves with what we have done and where we have gone.

Faith, initiative, and resilience have marked our collective journey. In mysterious and mystifying ways, it has been all about a strident line in the Lord’s Prayer that is our motto: Thy Kingdom Come!

Sometimes we learn that the Kingdom manifests itself and Christ appears on back streets in the midst of people who speak a language other than our own. It turns out to be a remarkable life lesson.

By Sister Pamela Smith, SS.C.M., Special to The Witness