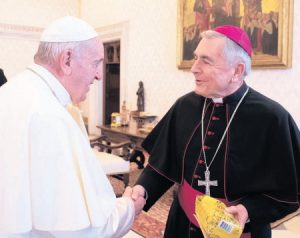 Pope Francis greets Bishop Ronald Gainer at the Vatican on Thanksgiving Day during the ad limina visit of the bishops of Pennsylvania and New Jersey. Bishop Gainer gifted the pope with a package of Argentinian tea.

The bishops of Pennsylvania and New Jersey engaged in a “free-flowing, open and frank” conversation with Pope Francis during their ad limina visit to Rome Nov. 25-29.

Bishop Ronald Gainer told The Catholic Witness Dec. 9 that the 20 bishops of Region III who met with the holy father for more than two hours on Thanksgiving Day experienced honest discussion of several topics, including clergy sexual abuse of minors.

“And it came up because we also raised it,” the bishop said.

The bishops participated in meetings with 12 different offices over the course of four days. Their meeting with Pope Francis was on Thanksgiving Day.

Bishop Gainer spoke of a significant difference in the format of the ad limina meetings under the current pope.

Prior to Pope Francis’ pontificate, ad limina meetings with the pope and the heads of Vatican congregations included a prepared speech by the congregation head, followed by questions from the bishops.

With Pope Francis, the format has been changed to an open conversation, allowing the bishops to ask questions or present topics for discussion. 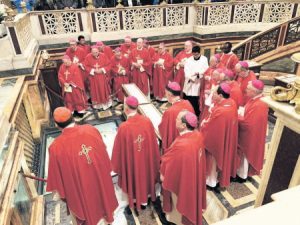 The bishops of Pennsylvania and New Jersey visit the Tomb of St. Paul at the Basilica of St. Paul’s Outside the Walls. The bishops celebrated Mass in Rome’s four major basilicas during the pilgrimage.

“In all of the meetings with the congregations, there were no prepared presentations. They simply wanted to know what we wanted to talk about,” Bishop Gainer said. “They really did address very thoroughly the issues that we raised.”

“Pope Francis spent more than two hours with us. It was an amazing, free-flowing, open conversation,” he said, maintaining the confidential nature of the meeting.

“We had extensive conversations about the scandals, and he was very much aware of the Pennsylvania Grand Jury Report,” Bishop Gainer said. “He was willing to hear our concerns and respond frankly.”

The bishops inquired about the status of the Vatican’s report on its investigation into former cardinal Theodore E. McCarrick. He had served in two New Jersey dioceses and as archbishop of Washington before his resignation from the College of Cardinals and dismissal from the clerical state for sexual abuse of seminarians and minors.

“The bishops have been asking for a report, of who knew what and when. We were told during the meetings that it is being translated into Italian for the holy father to read,” Bishop Gainer said. “No one indicated to us what’s in it, but we’re hopeful that it will be very thorough and answer all our questions when it is released.”

The Aspects of an Ad Limina Visit 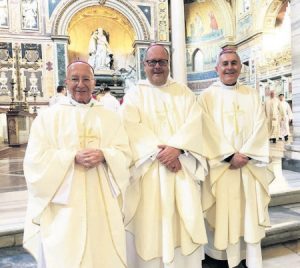 Auxiliary Bishop William Waltersheid of Pittsburgh, Bishop Edward Malesic of Greensburg and Bishop Ronald Gainer are pictured at the Archbasilica of St. John Lateran during their ad limina visit.

Ad limina is short for ad limina apostolorum, which means “to the thresholds of the apostles.” The visits, which take place typically every five to seven years, are an occasion for diocesan bishops to draw inspiration and guidance from the center of Catholicism, and to visit the tombs of St. Peter and St. Paul.

The visits also call upon each bishop to give an account of his Diocese to the pope and to the various Vatican offices. Six months prior to his ad limina visit, Bishop Gainer presented the Vatican an exhaustive, 300-page report, known as a Quinquennial Report, on every aspect of the Diocese.

Bishop Gainer spoke to the three aspects of an ad limina visit.

“First, it is a pilgrimage,” he said. The bishops celebrated Mass at Rome’s four major basilicas: St. Peter’s, St. Paul Outside the Walls, St. John Lateran and St. Mary Major.

“I’ve had the privilege of living and studying in Rome, so I’ve been to these basilicas many times, but you never lose the awe,” he said. “Each time you visit is like the first time. The four major basilicas are so amazingly beautiful. The history, the magnificence of the artwork and architecture can’t help but overwhelm you.”

The second aspect of the visit is giving an account of the state of the Diocese. 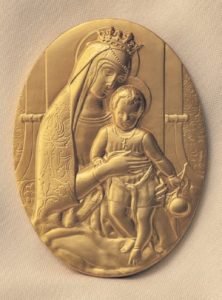 Pope Franics gifted Bishop Ronald Gainer with this medallion of the Madonna and Child.

“Submitting the Quinquennial Report recognizes the universal jurisdiction of the pope,” Bishop Gainer said. “He has clear jurisdiction over each Diocese; therefore, to make a report to him has become a requirement of Church law.”

The third aspect of the ad limina visit is “the opportunity to be received in audience by the Successor of Peter and to receive his counsel and to interact with him,” he said.

“Pope Francis was very relaxed. It was a very easy conversation. He is a very sincere, prayerful and humble person, and a very good listener,” he observed.

“Having been with the holy father and those offices that assist him in the daily shepherding of the Church, despite the stormy seas in which we’re now navigating, brings me back to the center,” Bishop Gainer said of the ad limina visit. “The opportunity to pray with my fellow bishops and be with Pope Francis helped to focus on what really matters as we go forward in hope.”

The U.S. bishops’ ad limina visits are divided into 15 regions. The visits began the first week of November, and are expected to conclude by the end of February.