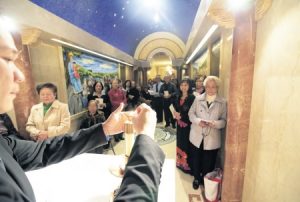 Members of the Vietnamese Catholic community pray the Rosary in the Chapel of Our Lady of La Vang. The Rosary was prayed in English, Spanish and Vietnamese during the pilgrimage.

Quick. In the next three minutes, write down the names of as many black Catholic saints as you can.

This was the start of Dr. Camille Brown’s talk on African Saints during the Diocese’s recent pilgrimage to the National Shrine in Washington, D.C. Many in the crowd had two or three names of African saints by the end of the exercise, but had many more by the end of Dr. Brown’s talk.

“Telling their stories is vital,” Dr. Brown, the associate superintendent for school leadership and community programs for the Archdiocese of Baltimore, said to the crowd gathered in the Queen of Missions Chapel in the Basilica. Dr. Brown added that African saints have wonderful stories, but they are seldom discussed. Take for example Moses’ wife, Zipporah.

“Aaron and Miriam (Moses’ siblings) were on his case because he married a Cushite woman,” Dr. Brown said. “She was a woman of color.”

Dr. Brown added that throughout the Bible, there are many geographical references to the African continent, but we often don’t recognize where these areas are.

“In Acts, there is a story of Philip and an Ethiopian man,” Dr. Brown said. Philip baptized this man, who then returned to his native land. “Because of this text, we know that Christianity was in Africa in the first century.”

Dr. Brown shared many stories of African saints, and those on the path to sainthood, who were martyrs for the Church, including St. Maurice and the Theban Legion. This legion was sent to kill Christians and ordered to worship pagan gods. 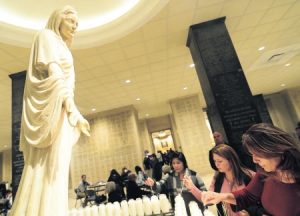 Women light candles at the foot of a statue of Our Lady in the lower level of the Basilica.

“He (St. Maurice) refused. He was given many chances and each time, refused,” Dr. Brown said. “All of his men also refused.” Dr. Brown added the entire Legion, more than 6,000 men, was killed 10 men at a time, in an effort to change their minds.

Another story Dr. Brown shared was about St. Moses the Black. Described as an “outlaw saint,” Moses the Black was a slave, but was so bad, he was kicked out of his master’s house. He ended up on the streets, robbing and being a “villain.”

“He had a conversion and became a monk,” Dr. Brown said. “He was the outlaw saint and his story offers the hope that anyone can change.”

“The Church welcomes everyone and calls everyone to a life of holiness,” Dr. Brown added. “It’s important that we get these stories out. There are countless saints of African descent.”

Those who attended Dr. Brown’s talk left knowing far more about the many African saints within the Catholic Church, with many expressing they intended to learn more.

“I thought the talk was excellent,” said Pearlie Ragsdale, a parishioner of St. Francis of Assisi Parish in Harrisburg. “Some of the saints which were mentioned, I knew about, but there are (at least) two I never heard of. When I get home, I’m going to do some research on them. I really enjoyed it.”