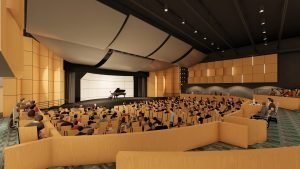 As Trinity High School in Camp Hill was set to commence the public phase of a capital campaign for enhancements to its educational environment, an anonymous benefactor stepped forward with a generous contribution.

The donor gifted Trinity with a $1.25 million matching pledge, designated for renovations to the auditorium.

John Cominsky, principal of Trinity High School, shared the news with The Catholic Witness on Sept. 4. He said the matching pledge, which has no time limit on it, is a substantial contribution toward the auditorium, which is expected to cost $3.5 million.

The donor, who wishes to remain anonymous, expressed the reason behind the generous contribution: “Our children have attended Trinity, and we have known for some years that areas of the facility need to be updated. The school has an administrative team in place now who are moving these improvements forward at a rapid pace. We love the music and performing arts programs at the school, and we feel that the students and staff deserve an auditorium facility worthy of their gifts and talents. We hope that others will join us in this effort.”

Trinity’s “Faith in Our Future” capital campaign enters the public phase, embarking on an $8.5 million project to support renovations to its facilities. The renovated auditorium will feature enhanced staging, lighting, sound, seating and flooring to enrich liturgies, assemblies and the performing arts. Murray Associates Architects of Harrisburg has provided the initial design concept. 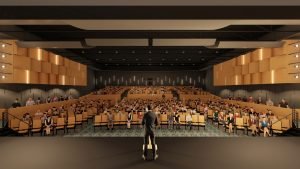 “Trinity High School is thrilled to have this matching donation opportunity for the auditorium renovation in the Faith in Our Future Campaign,” Cominsky said. “Because of the anonymous donor’s generosity, people interested in giving to this effort will see their donations double in value.”

“Trinity places high value on our music and performing arts programs, and we will enhance our facilities to showcase the God-given talents of our student performers,” he said. “May God bless this donor family for placing this renovation within reach.”

Learn more about Trinity High School and its “Faith in our Future” campaign at www.thsrocks.us/faith-in-our-future/.