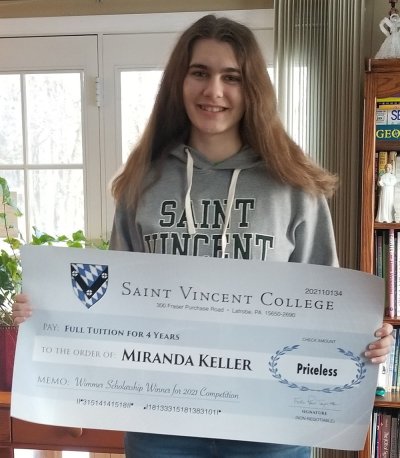 Keller was awarded the scholarship, valued at more than $150,000, after placing among the top five in the Scholarship Competition, which drew 143 entrants.

At Bishop McDevitt High School, Keller is involved in a host of academic and extracurricular activities. The president of her school’s chapter of the National Honor Society, she is also a member of the Mathematics National Honor Society, Foreign Language National Honor Society, Poetry Club, Christian Service Club, Spanish Club, Talitha Koum, Philsophy Club and Campus Ministry. She serves as treasurer on Bishop McDevitt’s Student Council, as well as a Bishop McDevitt student ambassador. A two-sport athlete, she is a three-year starter and one-year captain of both the basketball and soccer teams, while she was named a conference all-star in soccer and has been named to the Central PA Elite AAU Basketball All-Academic Team for seven straight years. She has been named a recipient of the Sisters of Sts. Cyril and Methodius Servant Leader Award and has earned Colonial Park Rotary Club Student of the Month honors. As a sophomore, Keller finished with the school’s highest average in both Spanish II and English.

Outside of the classroom, Keller has worked as an office assistant and cleaner for Fish Window Cleaning, has served as a camp counselor at Bishop McDevitt’s annual girls’ basketball camp and as teen leader for the Divine Mercy Encounter Retreat. She also enjoys babysitting.

The winner of the Diocese of Harrisburg’s Faith Bee in 2017, Keller and her family are members of St. Catherine Labouré Parish in Harrisburg, where she is an altar server. She is the daughter of Kerry and Gretchen Keller; her grandfather, Lavern Lenze, is a 1961 graduate of St. Vincent College.

The Wimmer Scholarship program is named after Archabbot Boniface Wimmer, who founded Saint Vincent College in Latrobe, Pa., in 1846 as the first Benedictine college in the U.S. The program recognizes high school students with outstanding academic abilities and encourages them to pursue a quality undergraduate education at St. Vincent College.

The scholarship winners are based on their performance on a written examination administered at St. Vincent in December and January. The 143 students who participated in the 2020 exam were college-bound and met the academic qualifications of a minimum 3.75 GPA, as well as a documented SAT score of 1,300 or above or a minimum ACT score of 28. Students with no documented SAT or ACT scores were eligible to sit for the exam if they hold a 4.0 GPA and have successfully completed six AP/college courses. This is the 40th year of the Wimmer Scholarship Competition.