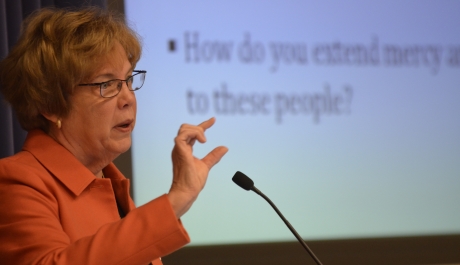 Our treatment of the lonely and the sick, the immigrant, the unborn, the imprisoned and the environment came to the forefront of discussion and calls to action during a diocesan symposium on Catholic social teaching, where the keynote speaker challenged Catholics to live their obligation to be Good Samaritans to those they meet in the margins of society.

“Wherever we are – whether in an office building or working on the street – go and do likewise of the Good Samaritan,” said Dominican Sister Donna Markham, Ph.D., President and CEO of Catholic Charities USA.

“You and I today are being called by our Church and are being called by the words of Jesus to be both Good Samaritans and good innkeepers, attending to those who have been beaten down, the legions that are lying on the sides of our roads of neglect and distain in our society and across the world,” she said in her keynote address.

Held at the Cardinal Keeler Center in Harrisburg on March 19, the symposium was hosted by the Diocesan Commission on Catholic Social Teaching. The gathering included Holy Mass celebrated by Bishop Ronald Gainer – who observed the second anniversary of his installation as Bishop of Harrisburg that day – and breakout sessions on the life and dignity of the human person, immigration reform, affordable health care and religious freedom, end-of-life issues, ecology and social action.

In her keynote, Sister Donna drew on the parable of the Good Samaritan – who was moved by compassion to bind up the wounds of the man lying stripped and beaten along the roadside – as a model for Catholics today.

“We are all connected to each other, and we encounter the face of God in the lives of the people we touch,” she said.

In his encyclical Laudato Sí, Pope Francis speaks of the personal relationships that we share, and calls us to work tirelessly on behalf of those who are “rendered disposable,” Sister Donna pointed out.

The response of the Good Samaritan, who comes to the aid of his neighbor and takes him to the innkeeper, “is our response as Church in mercy and justice on behalf of those who have been consigned to live life on the margins,” she remarked.

She called Catholics to recognize the people we see who are “left half dead, literally and figuratively” – the ill, the poor, the hungry, the jobless, the elderly, pregnant mothers with no medical care.

“Our neighbors lie at the roadsides, vulnerable persons surviving as best they can on the margins of our communities. If our eyes our open, we need to see them at every turn in the road,” she said.

“The basis of Catholic social teaching is that you have to have your eyes open, you have to see,” Sister Donna stressed.

Like the Good Samaritan, we see the face of Jesus in those we encounter, yet we’re also called to be innkeepers, to stabilize the those in need, she said.

“It’s not just enough to get the person to the inn; how do we get them stabilized? Not only do we have service, but we have advocacy – the work we do with our local, state and federal governments to look at the long term solutions. The parable tells us not just to do the Band-Aid work, but to remedy the situation. The Church’s encyclicals across time have called us to serve and to advocate,” Sister Donna remarked.

“We are called more than ever in this day and age to be counter-cultural. The prevailing culture is one of division, violence, war, disregard for life and dignity. To be counter-cultural, we need to counter that culture, in both big ways and little ways…. We are called to be both Good Samaritans and innkeepers through our ministry of love and compassion as believers. That is what the Gospel calls us to,” she said.

For information about the Diocesan Commission on Catholic Social Teaching, or ways you can get involved in such efforts, contact Pete Biasucci, Assistant Executive Director of Catholic Charities of the Diocese of Harrisburg, at 717-657-4804 or pbiasucci@hbgdiocese.org.