Catholic Social Teaching: Labor and the Dignity of Work

You are here:
News 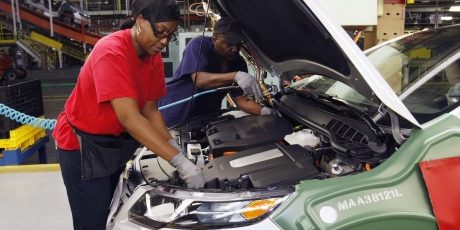 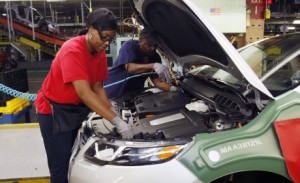 Workers assemble a vehicle at the General Motors Detroit-Hamtramck assembly plant in Hamtramck, Mich. The dignity of work and the rights of workers is an important theme in Catholic Social teaching.

Of the few details the Gospels provide about the Holy Family, Joseph’s carpenter trade stands out as an example of the dignity of labor. Joseph engaged in his work in loving support of Mary and Jesus. He remained poor and modest, even while engaging in an honorable trade that benefited his community.

In the Gospels Jesus takes the side of those most in need, physically and spiritually. Through parables, he teaches about the uses of money and wealth, a spirit of stewardship and detachment, and the call to seek and serve the reign of God. “Amen, I say to you, whatever you did for one of these least brothers of mine, you did it for me” (Matt. 25:40)

Over the centuries, Church teachings and practices have maintained the central place of labor in fulfilling God’s work of creation. St. Benedict, whose Rule has been a leading guide in Western Christianity for 1,500 years of monastic communal living, wrote that manual labor must be undertaken with care, alongside prayer, study, and rest. St. Francis Assisi wrote in his Testament in 1226 that all brother friars should work “in labor which is compatible with honesty.” Labor was not for profit; rather, it was for “the sake of example and to repel idleness.” For many centuries, the Church condemned the practice of usury that provided great profits for people who used other peoples’ money to get rich through excessive interest on loans.

The world of the medieval artisan was organized around a careful attention to the rights and responsibilities of apprentices, journeymen, and master craftsmen. Just wages and fair prices—not profits—were paramount. Sloppy work and avarice violated communal and religious norms. The craft guilds were also mutual and benevolent societies; they helped the impoverished and sick members; they took care of the widows and orphans; they remembered the needs of the poor.

The vast social and economic changes of the Industrial Revolution disrupted this way of life. The first papal encyclical to address the new world of the wage earner, management and corporations, and the modern state was Pope Leo XIII’s Rerum Novarum (“On the Condition of Labor”) which he published in 1891. The pope sought to restore the values of the medieval guilds. He saw this as a difficult task since corrosive individualism and radicalism had thwarted the communal, ordered world of the Middle Ages. As a result, workers had been “surrendered, isolated, left helpless to the hard-heartlessness of employers and the greed of competition.” Pope Leo rejected political and social movements that threatened private property and encouraged revolution, but he warned employers that they had a fundamental responsibility to provide just wages and fair working hours “to support a frugal and well-behaved wage-earner.” In a sign of the times, he acknowledged that modern governments might play a positive role in the economy, “should circumstances require” by regulating wages and working conditions.

The most lasting effect of Rerum Novarum to Catholic social teaching was its approval of labor unions. Pope Leo observed that employers would not necessarily act in the best interests of their employees. Therefore, workers “must form associations among themselves and unite their forces so as to shake off courageously the yoke of so unrighteous and intolerable an oppression.” His hope was that social harmony would emerge as the three – employers, workers, and government – worked together: “Capital cannot do without labor, nor labor without capital. Mutual agreement results in pleasantness and good order; perpetual conflict necessarily produces confusion and outrage.”

Pope Leo’s encyclical gave rise to a great deal of activity in support of unions in the United States. Father John Ryan, who published “A Living Wage” in 1906 and served as the author of the U.S. Bishops’ “Program of Social Reconstruction,” advanced this perspective. Father Ryan argued that a living wage was a natural rather than a positive, social, or legalistic right. A natural right is grounded in the intrinsic worth of the human person and their ability to develop their personality and talents. He held that, without a living wage, people could not attain their natural end of flourishing as God intended. The dignity of workers required measures to ensure security for oneself and family. These included reasonable working hours, unemployment and old-age insurance, medical care, collective bargaining rights, and municipal housing as well as public ownership of utilities. Many of Father Ryan’s recommendations came into being, especially during the New Deal.

American Catholics—the majority of whom were working-class and immigrants (or children of immigrants)—welcomed this social justice message. Beginning in the 1930s, bishops and clergy (known as “labor priests”) founded over 150 Catholic labor schools to teach workers how to form and run unions. The Catholic Worker Movement, founded by Dorothy Day and Peter Maurin, supported in word and deed the needs of workers and the poor. During the 1940s, lay Catholics and clergy established chapters of the Association of Catholic Trade Unionists in cities such as New York, Pittsburgh and Detroit in order to bring the Church’s social teachings into union halls. Numerous Catholics (including Day) marched with Cesar Chavez in the 1960s and 1970s in support of the United Farm Workers. Many Catholics, as individuals and in parishes, honored the union’s national boycott of table grapes.

In 1986, the U.S. Conference of Catholic Bishops published “Economic Justice for All.” In this remarkable pastoral letter, the bishops gave their full support to “the rights of workers to form unions” and stated, “We vehemently oppose violations of the freedom to associate, for they are an intolerable attack on social solidarity.” They called on readers to “modify the operation of the market when it harms vulnerable members of society.” To that end, unions “help workers resist exploitation.”

The bishops warned of the harmful effects of bloated defense budgets and racial discrimination on providing a secure livelihood for all Americans. And, for the first time, they called for “an ecological ethic which will shape a future that is both just and sustainable.” In all these matters, government “has an essential responsibility” to work alongside employers, unionists, and others ‘to protect what is important to us and to promote our common values.”

The renewed efforts in the past decade to put Catholic social teachings into practice reflect the new context of globalization, increased migrations of workers, and the dominance of the service economy and casual labor. Since 2008 a new organization, “Catholic Scholars for Worker Justice,” has dedicated itself to supporting unionization efforts at Catholic and secular institutions. Group members teach at nearly 100 colleges and universities. On many campuses students have come together to fight for a living wage for the campus workers. Very few low-wage workers on American campuses even earn a poverty-level income, let alone receive health benefits. Many work only nine or 10 months a year and are often barred from receiving unemployment benefits during the few summer months they are unemployed. Yet their work is an essential ingredient of college life; without them, campuses couldn’t function. Some of these living wage campaigns have been successful, such as the one at Jesuit-run Georgetown University.

So too has a new generation of “labor priests” emerged to support unionization efforts and improve working conditions. In 2012, priests from across the country gathered in Chicago under the auspices of the National Federation of Priests’ Councils, and with an endorsement from the U.S. Conference of Catholic Bishops. They studied Church social teachings on labor and strategized on ways to assist workers. “It really goes back to the ministry of Jesus,” noted one priest in attendance. “His care for those who were oppressed and marginalized is why we do what we do in supporting those in need—like the working poor.”

The bishops have spoken with a determined voice on these issues. With Congress and the public in a seemingly intractable disagreement over immigration policy, the bishops have supported measures to provide pathways to citizenship for undocumented immigrants, improved living and working conditions, as well as education and health care. “The current immigration system, which causes so much human suffering, is a stain on the soul of our nation,” said Archbishop Jose H. Gomez, who chairs the bishops’ Committee on Migration Issues.

They have maintained their support for a living wage as well. Speaking this past June on the 75th anniversary of the Fair Labor Standards Act, the law that first established a federal minimum wage, Bishop Stephen Blaine, who heads the bishops’ Committee on Domestic Justice and Human Justice, testified before Congress. “Work should be a ladder out of poverty for families, it should not trap them in poverty,” said Blaine. “Yet, this is where we find ourselves—a growing number of families are working but do not make enough to live in dignity.”

As the world changes so too have the some of the ways the Church understands the economy, but papal encyclicals since Pope Leo’s Rerum Novarum have repeated the theme of the unity of humankind and the common ownership of the gifts of creation. These encyclicals include Pope Pius XI’s Quadragesimo Anno (1931), Blessed John XXIII’s Pacem in Terris (1963), Blessed John Paul II’s Laborem Exercens (1981), and Benedict XVI’s Caritas in Veritate (2009). Pope Francis has continued to call Catholics to seek justice and avoid conforming to the pull of consumerism and individualism in the marketplace. In comments he delivered on May Day (May 1) this year, the new pope lamented that many political and economic systems “have made choices that mean exploiting people.” The day on which he made his remarks—also the Feast of St. Joseph—the new pope reminded his listeners that “we do not only get dignity from power or money or culture, no! We get dignity from work.”

By Dennis Deslippe, Special to The Witness