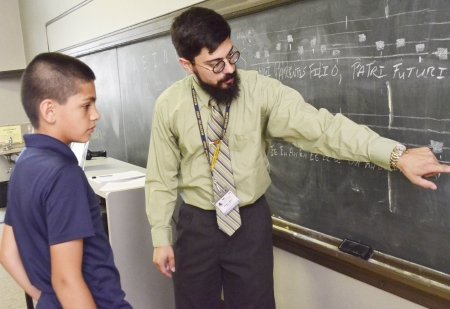 Patrick Torsell, Director of Music for the Mater Dei Latin Mass Community in Harrisburg, shows Daniel Miller how to write chant during a camp at St. Lawrence Chapel.

As 15-year-old Ryan Kerris ascended the stairs to the choir loft of St. Lawrence Chapel in Harrisburg for the first time, an expression of awe broadened across his face.

Ryan, a member of Our Lady of Mount Carmel Parish in Mount Carmel, was introduced to the Latin Mass a year ago, and came to St. Lawrence last month for a chant camp hosted by the Mater Dei Latin Mass Community.

“I don’t know the full Latin language, but last year I discovered the Latin liturgy and I just fell in love with it. When I heard about the chant camp, I just knew I had to attend,” he said.

The day camp, June 24-28, drew upwards of 30 children and teens, who learned about the history of chant, the purpose of music in the liturgy, music notation and singing in a choral setting. The week culminated with the students raising their voices in song for a noon Solemn High Mass in the Extraordinary Form at St. Lawrence Chapel on June 28, the Feast of the Sacred Heart.

“It’s so great to have the traditions of the Church being preserved. It’s so important to learn them so we can continue them into the future,” Ryan said.

Patrick Torsell, Director of Music for the Mater Dei community, coordinated the camp.

“The chant camp is a great opportunity for young people to really enter more deeply into the liturgy and the history of the Church,” he said. “The more that you know about the Mass and chant, the more deeply you can enter into it spiritually. We live in an increasingly secularized world and a lot of people, especially young people, are dying to have spirituality in their lives, something truly set apart. This camp gives kids a chance to really enter into history, philosophy and music all at the same time.

Lessons where taught in a classroom setting, where students learned pronunciation, translation, proper tone and how to “stand well” while singing. Divided into small groups, the campers also visited the chapel and the choir loft, where they applied what they had learned.

“We try to give students as much as a holistic approach as we possibly can to singing and chanting. It takes many elements to really be able to not only sing well, but also to pray well,” Torsell said. 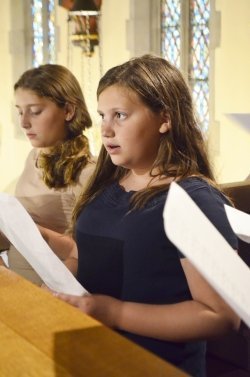 Gemma Forbeck and Elizabeth Weld rehearse in the choir loft of St. Lawrence Chapel in Harrisburg with fellow campers on June 27.

“By the end of the week, they take the history, the philosophy, the understanding of why music matters in the liturgy and why sacred music needs to be sacred and set apart, and they put it all together to make beautiful music at Mass,” he said.

“I’ve always found the Latin Mass to be very beautiful, so I wanted to learn to sing along with it. I enjoy letting my voice go to God, and that’s what sparked me to come to this camp,” said Helena, a member of the Mater Dei community in Harrisburg.

Learning the translations from Latin to English proved meaningful for her.

Helena’s favorite aspect of the week was attending Mass each morning, “because then you grow in the faith,” she said.

At the end of the week, she and her fellow campers raised their voices in unison to honor the Lord.

“Solemn High Masses are the highest form of Mass a priest can sing. This is the first one I’ve ever sung for,” Helena said. “I feel like after all that work during the week, I can make something out of it. It gives me a good way to see the Mass, instead of looking at tall people in front of you as a kid. In choir, I can see the Mass and follow along with what the priest is doing, and it’s a lot of fun.”

Father Gregory Eichman, FSSP, chaplain of the Mater Dei Latin Mass Community, said “The sacred music they’re getting from this chant camp is enabling them to reach back all the way to the beginning of the Church and experience the same chant that has helped so many other Catholics throughout the centuries. It also helps them get away from the strictly profane and secular music to the music that elevates our minds and our intellect and takes us to God.”

“It’s rewarding because we know what we’re offering to them is something that is touching their hearts,” he said.

Wheeler said he aims to expand the students’ knowledge about the ancient rite, the connection between the ancient and the new, and how those traditions remain.

Getting in connection with our roots gives us strength. Chant and sacred polyphony are always great ways of doing that. They transcend generations,” said Wheeler.

Wheeler assists at the chant camp at St. Lawrence because of his connection to Torsell, who was once lead organist at Wheeler’s parish.

“The kids are loving what they’re doing and, to me, that’s an exciting part of what I do,” Wheeler said. “Some of them have really good training, and others have little training, but there is a lot of natural ability among the whole group. They all present some aspect of learning musically. Over time, you start to see the lightbulb of recognition and they’ll say, ‘Oh yes, now I understand that.’”

Torsell said the students’ inquiries and excitement are indicative of their willingness to participate in chant camp, and of their love for the Church.

“I think the fact that they’re willing to ask questions – whether it’s about what I just wrote on the board, or whether it’s when we’re in the chapel and they want to know more about the bells or the organ, or why we have to sing something in Latin – those are the kinds of questions that show they’re genuinely interested,” he said. “What we’re giving them is feeding their soul and their intellect.”