Charismatic Renewal and the New Evangelization 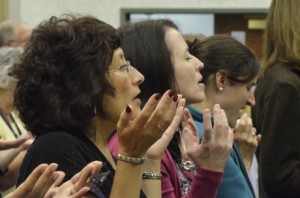 During Mass celebrated at the Diocesan Charismatic Day of Renewal, participants give praise to God.

Ceil Ritchey, a member of St. Leo the Great Parish in Rohrerstown, says desperation drew her into Catholic Charismatic Renewal.

She was reeling from a sudden separation from her husband, and found herself at a low point in life.

“I realized I was beyond anything that could get me past the trial I was in, so I started to seek God,” she said.

She began to attend daily Mass and pray the Rosary. Eventually, she came to sense that God was directing her down a path in life that included Catholic Charismatic Renewal, and he placed people in her life who would help her get there.

She joined the movement – defined by Charismatic Catholics as a way of life, of being renewed in the gifts of the Holy Spirit – and responded to God’s call for her to teach and evangelize the faith.

That was more than 30 years ago. Since then, Ms. Ritchey has traveled to Eastern Europe and Africa, working with a ministry that spreads the Gospel message.

“Charismatic Renewal has reordered my life. God has put me where he wants me to be,” she said.

Outpouring of the Holy Spirit

The New Evangelization calls Catholics to deepen their faith, renew their relationship with Christ and the Church, and go forth to proclaim the Gospel.

In the Catholic Church, ecclesial movements – groups and associations that work to spread the Good News – have helped play a part in ushering in the New Evangelization.

In his 1987 apostolic exhortation on the vocation and mission of the lay faithful (Christifidelis Laici), Blessed John Paul II pointed to these movements as a sign of “how the Holy Spirit continues to renew the youth of the Church and how he has inspired new aspirations towards holiness and the participation of so many lay faithful.”

One such ecclesial movement is Catholic Charismatic Renewal.

An estimated 120 million Catholics worldwide have been “baptized in the Spirit,” defined as a release of the power gifts of the Holy Spirit received in Baptism. Catholic Charismatics seek a deeper relationship with God and with Jesus through the Holy Spirit.

“It’s like being on fire with the Holy Spirit,” explained Father Francis Karwacki, the liaison for Catholic Charismatic Renewal in the Diocese of Harrisburg. “It’s almost like a jump start for our batteries. We’re recharged, rejuvenated with the Holy Spirit.”

Catholic Charismatic Renewal is the outgrowth of a spiritual retreat that several students and faculty members from Duquesne University took in 1967 to reflect on the power of the Holy Spirit in the early Church.

During the retreat, many of the participants felt the Spirit begin to move within them, and they decided to share this experience in different prayer groups upon their return.

Thereafter, the movement spread through campus ministries across the United States and eventually to other countries.

Catholic Charismatic Renewal was first introduced to the Diocese of Harrisburg in 1971, when a handful of diocesan priests worked with Allentown College to invite Catholics to a seminar. From that initial gathering sprang a small group that received approval from Bishop Joseph Daley to bring a Catholic Charismatic prayer group to the diocese.

Since that time, with continued support from the diocese, Catholic Charismatic Renewal spread into all parts of the diocese with prayer groups, seminars, Masses with prayers for healing, annual retreats and days of renewal, and a priest liaison.

In the Diocese of Harrisburg, there are approximately 20 prayer groups where Charismatics meet regularly. Meetings include prayer, song, personal reflection, teaching and intercessions.

“Prayer groups have been great ways to provide instruction on praise. We talk about prayer as adoration, contrition, thanksgiving, supplication. You think about God and how you pray to him,” said Dr. John O’Rourke, who, with his wife, leads the prayer group in Danville, which began in the mid 1970s.

Each prayer group is unique because it reflects the personalities of its members.

“I find our prayer group to be a miniature Church. The strength that we find there, we are able to bring to the larger Church,” Dr. O’Rourke said.

“There is nothing stronger than a group of people who come to pray together to praise the Lord,” he said.

Catholic Charismatic Renewal also has “Life in the Spirit” seminars, which is a good starting point for people interested in knowing more about the movement. The seminars are made up of seven sessions on Christianity. Topics include salvation history, the saints, or Church teaching.

The seminars are geared for people interested in the Charismatic way of life, and in a deeper relationship with God.

As an ecclesial movement, Catholic Charismatic Renewal calls attention to the work of the Holy Spirit, who gives gifts for the purpose of edifying and building up the Church.

The purpose of these gifts is spelled out in the Dogmatic Constitution on the Church (Lumen Gentium), promulgated by Pope Paul VI:

“It is not only through the sacraments and the ministries of the Church that the Holy Spirit sanctifies and leads the people of God and enriches it with virtues, but, allotting his gifts to everyone according as He wills, He distributes special graces among the faithful of every rank. By these gifts He makes them fit and ready to undertake the various tasks and offices which contribute toward the renewal and building up of the Church, according to the words of the Apostle: ‘The manifestation of the Spirit is given to everyone for profit.’ These charisms, whether they be the more outstanding or the more simple and widely diffused, are to be received with thanksgiving and consolation for they are perfectly suited to and useful for the needs of the Church.”

The charismatic gifts are described in Scripture:

It is common during a Charismatic Mass to see participants giving God praise by dancing, clapping or raising and swaying their hands to music. This type of prayer involves every aspect of an individual.

“We’re enthusiastic with the Spirit,” said Father Karwacki, who likened their exuberance to those cheering with excitement at sporting events. “We’re excited for the Lord.”

It is also common to hear Charismatic Catholics utter foreign-sounding words or phrases during times of worship. This is called “

glossolalia,” the vocalizing speech-like syllables that lack any readily-comprehended meaning, but serve as a way for Charismatics to give praise to God.

Charismatics also believe that God can give the gift of tongues, though the individual might not understand the word or phrase they are saying.

“This is the way the Holy Spirit prays through us to the Father,” explained Martin White, who, with his wife, Bernice, is a Charismatic prayer group leader in Lancaster. “The Holy Spirit forms the perfect prayer for what we are trying to express.”

Prophecy is another gift of the Spirit, through which an individual speaks a message inspired by God. The words are used to teach, console or inspire, a sign of the Holy Spirit at work.

“Charismatic Renewal is all about putting an emphasis on the gifts of the Spirit,” noted Bernice White. “We have continuous spiritual growth as we journey to obtain what Christ has promised us in Scripture.”

“When the work which the Father gave the Son to do on earth was accomplished, the Holy Spirit was sent on the day of Pentecost in order that he might continually sanctify the Church” (Catechism of the Catholic Church, 767).

“So that she can fulfill her mission, the Holy Spirit ‘bestows upon [the Church] varied hierarchic and charismatic gifts, and in this way directs her’” (CCC, 768).

The Church – from popes to bishops – has affirmed Catholic Charismatic Renewal since the movement’s beginnings on the heels of the Second Vatican Council.

Pope Paul VI told thousands of Charismatics gathered for their international conference in 1975 that “The Church and the world need more than ever that the miracle of Pentecost should continue in history.”

Blessed John Paul II was also supportive of the movement, which he called “a sign of the Spirit’s action” and a “very important component in the total renewal of the Church.”

“Thus, we can say again, with great thanksgiving and enthusiasm, that in the Catholic Charismatic Renewal and in the grace of baptism in the Holy Spirit we see God’s outpouring of a new Pentecost,” their statement said.

Pope Francis has called Catholic Charismatic Renewal a “service to the Church herself.”

“The movements are necessary, the movements are a grace of the Spirit,” he said of the ecclesial associations that broaden the horizons of the New Evangelization. “Everyone seeks his own movement, according to his own charism, where the Holy Spirit draws him or her.”

The New Evangelization is about deepening one’s relationship with God. Charismatic Renewal is just one pathway to realize this. The Church encourages individuals to find their own.