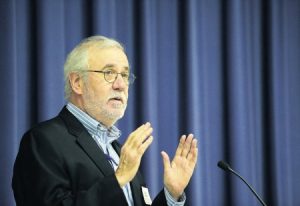 Bryan Miller of the Philadelphia-based organization Heeding God’s Call to End Gun Violence talks about advocacy during the annual LARC Day of Dialogue, hosted at the Diocesan Center in Harrisburg.

Gun violence, racism, pacifism and the Christian response to violence were the topics of discussion at this year’s LARC Day of Dialogue. The annual gathering is a joint effort of the Lutheran, Anglican and Roman Catholic churches in central Pennsylvania for prayer and greater cooperation between the Churches.

Taking place nine days after the mass shooting at the Tree of Life Synagogue outside of Pittsburgh, the Day of Dialogue presented a socially relevant topic, said Father James Lease, Director of the Diocesan Office of Ecumenical and Interreligious Affairs.

“In the past, we’ve talked about things on which we differ to come to some resolution. This topic is something we can work together on,” he said.

The event, Nov. 5 at the Diocesan Center in Harrisburg, featured three speakers, prayer in the three Christian traditions and a panel discussion on responses to violence.

“The Christian response to gun violence is absolutely critical,” he said. “The last week with the shooting at a synagogue in Pittsburgh is another example of why that’s the case.”

“In America’s history of social change, you’ll see that the Christian community, in many cases, led the way. That is not the case when it comes to gun violence,” Miller said. “Even after the shooting in Pittsburgh, interfaith groups and faith leaders were quick to issue thoughts and prayers, all of which are appropriate, but they are far from enough.”

“We at Heeding God’s call believe that our Christian duty, and the thing that Jesus would have us out there doing, is to stand in front of a gun shop, to witness a murder and stand exactly where it took place, to honor the people lost to gun violence with memorials and to gather people of faith to learn about the problem.”

In a presentation on peace and non-violence, Michael Long, Associate Professor of Religious Studies and Peace and Conflict Studies at Elizabethtown College, offered examples of Christian pacifism in history and spoke of recent scholarship on the benefits of civil resistance instead of violence.

“You don’t have to be a pacifist to be nonviolent. Nonviolent actions include marches, rallies, boycotts, sit-ins,” Long said. “Nonviolence is a technique, while pacifism is a way of being.” 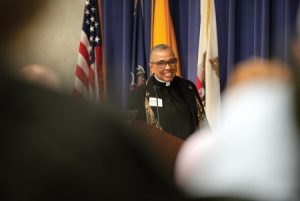 Rev. Dr. Gayle Fisher-Stewart, Assistant Pastor at Calvary Episcopal Church in Washington, D.C., and Founder of the Center for the Study of Faith in Justice, speaks on the Christian response to the violence of racism. The LARC Day of Dialogue drew attendees from the Lutheran, Anglican and Roman Catholic churches.

Rev. Dr. Gayle Fisher-Stewart, Assistant Pastor at Calvary Episcopal Church in Washington, D.C., and Founder of the Center for the Study of Faith in Justice, spoke on the Christian response to the violence of racism.

In an interview with The Catholic Witness, she pointed to societal systems that have developed and maintained racism, and issued a challenge.

“Ask yourself, ‘Why is my church all white? Why is my community all white? Do I want my children to attend schools that are diverse?’ How many churches or faith institutions are white or don’t make people of color feel comfortable?” she posed.

“People choose to affiliate with like people, and while that is not in and of itself racist, to not even think about it or think about how people of color might be dissuaded from living in certain neighborhoods, attending certain schools or even attending certain churches is to ignore that racism is a problem,” Rev. Dr. Fisher-Stewart said.

She called the Day of Dialogue an opportunity to heal fractures across Christian denominations.

“Jesus left us one church, and human beings have continued to fracture it into the many pieces we call denominations, and then the non-denominational churches. [The Day of Dialogue] is beginning to heal the fracture and how we can be the church Christ calls us to be,” she said. “Just as ending racism requires that we reach across racial lines, to heal denominationalism requires that we reach across denominational lines to heal the world. If we think about it, to fracture something (the church, the body of Christ, the host at Communion) requires violence. Showing the world that the pieces can come back together, even for a short time, demonstrates that healing can occur. The church must lead the way if this country is to be what it purports to be; it must be the example for all to follow.”

For information about ecumenical and interreligious activities in the Diocese, visit www.hbgdiocese.org/about/diocesan-offices/ecumenical/ or contact Father Lease.