“Our Lord’s words, ‘I came not to be served, but to serve,’ are at the very center of Christian existence, which is called ‘diakonia.’ This dimension comes directly from Christ; it is in him, and from him. In his dimension, God enters the world by becoming man. As man, he becomes a servant, for every man is God’s servant. This is the order of Creation. Christ comes to renew this service, since men had rejected it, and therefore Christ undertakes this service himself. Thus, diakonia as a dimension of the entire Christian existence must be the topic and goal of the formation of every Christian, but in particular, the priest and the bishop. The theology of service is of primary importance for Christian formation: The Mystery of the Eucharist, the sacrament of permanent service, the sacramental continuation of God’s servant, who said, ‘Take and eat,’ as if it was a constant self-emptying consistent with the nature of food and simultaneously the sign of personal communion.” (“In God’s Hands: The Spiritual Diaries of Pope John Paul II”) 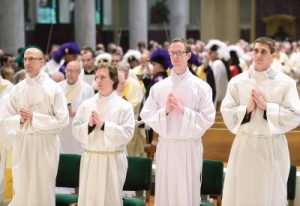 Four men were ordained to the diaconate on May 20 at St. Patrick Cathedral in Harrisburg, in anticipation of their ordination to the diocesan priesthood next year. In his homily during the Mass, Bishop Ronald Gainer told the deacons – pictured from left, Timothy Sahd, Kenneth Roth, Richard Lyons and Benjamin Dunkelberger – “You will begin today a new relationship to the Mystery of the Eucharist.”

Reading aloud this excerpt from the recently-released English translation of “In God’s Hands: The Spiritual Diaries of Pope John Paul II, Bishop Ronald Gainer told the congregation gathered on May 20 for the Ordination to the Diaconate that the saint’s words remind the faithful that each of our lives must be ordered to service.

Click here to view a recording of the Ordination

Deacon Benjamin Dunkelberger, Deacon Richard Lyons, Deacon Kenneth Roth and Deacon Timothy Sahd received the Sacrament of Holy Orders at St. Patrick Cathedral in Harrisburg May 20, and will spend this summer in diaconal ministry before returning to the seminary for their anticipated ordination to the priesthood next year.

The fifth member of their class – seminarian Stephen Logue – is studying at the Pontifical North American College in Rome and will be ordained to the diaconate in Rome in September. He is a native of St. Patrick Parish in York.

“We are each a project of God. We each carry within ourselves a personal vocation, a calling, and an obligation to follow God’s design for our lives,” Bishop Gainer said in his homily. “What a marvelous work of grace it is that these men began to discern that God had a rather particular vocational project in his heart for their lives!”

Directly addressing the candidates prior to their ordination, the bishop remarked, “Ordinations always take place in the context of the Eucharist. Through Ordination to the Diaconate, Benjamin, Richard, Kenneth and Timothy, you will begin today a new relationship to the Mystery of the Eucharist. You will assist the priest at the altar in the celebration of the Mass, and you become today an Ordinary Minister of Holy Communion. Always keep the Lord, who gives himself to us as food and drink in the Eucharist, and the Lord who dwells among us in the Tabernacle, at the center of your life and of your ministry.”

“All that you do in your diaconal ministry finds its source and its summit in the Eucharistic Mystery,” he told them. “Your Ministry of the Word is designed to prepare our sisters and brothers for their sacramental encounter with Christ in the Eucharist. Your Ministry at the Altar is designed to assist the priest who stands before the Church as another Christ, who celebrates in the person of Christ as head of His Body, the Church. Your Ministry of Charity is itself an extension of the Eucharist. By recognizing his Real Presence on the altar and in the tabernacle, we are better able to recognize his face, his presence in all our sisters and brothers, especially those who are poor or needy.

“My brothers, never forget, never ignore the centrality of our Eucharistic Lord for the ministry you are about to enter,” he told them.

Following their summer assignments, the deacons will return to seminary to complete their formation; Deacon Dunkelberger and Deacon Roth to Mount St. Mary’s Seminary in Emmitsburg, Md., and Deacon Lyons and Deacon Sahd to St. Charles Borromeo Seminary in Wynnewood, Pa.