Rosemary Connelly had never traveled outside of the United States, or been on an airplane. She is afraid of heights. And she is discerning her path in life since her husband’s death in 2016. 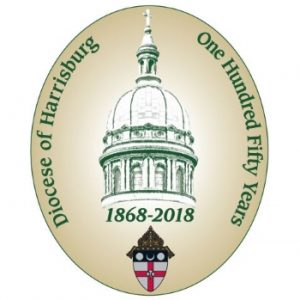 Yet, there she was on a flight with nearly 70 other pilgrims traveling from the Diocese of Harrisburg to Ireland for a 12-day pilgrimage to the Emerald Isle, Aug. 28-Sept. 8.

She had signed up for the pilgrimage just five days before its deadline – no passport or birth certificate on hand.

“I felt that if it was meant for me to go, everything would go well,” Ms. Connelly, a member of Immaculate Heart of Mary Parish in Abbottstown, told The Catholic Witness.

Her paperwork immediately fell into place. “This was a sign from God that I was to go on this trip,” she said.

She was drawn to the pilgrimage – celebrated in observance of the diocese’s 150th anniversary – because of her late husband’s Irish heritage. And because she’s searching for where to go next in life. 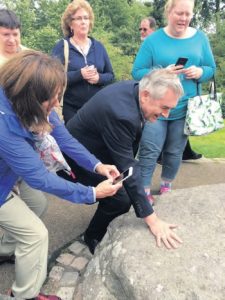 Bishop Ronald Gainer touches the stone that marks the grave of St. Patrick, the patron saint of the Diocese of Harrisburg.

“Since my husband’s death, I have been drowning in sorrow. The loneliness is overwhelming at times. I felt I had no hope left,” Ms. Connelly remarked. “I felt I had to…contemplate where my life is to go next. It is still not clear to me what my purpose is, but I do feel that my life has changed to the positive side. I have grown closer to God and my Catholic faith.”

In Ireland, her faith was buoyed by her fellow pilgrims, including Bishop Ronald Gainer. He led the group on the pilgrimage, but returned early upon the death of his mother.

“The sites we visited were extremely remarkable and, when visiting them, you come to the conclusion that there is a God,” Ms. Connelly said.

The pilgrimage circuited Ireland, from Dublin to Belfast, Knock, Kylemore, Limerick and Cork.

Among the highlights: the Down Cathedral, burial place of St. Patrick, the patron saint of the Diocese of Harrisburg; St. Columb’s Cathedral, which dates to the early 1600s; the Basilica of Our Lady of Knock, where Our Lady appeared in 1879; Croagh Patrick, the mountain where St. Patrick spent Lent in 441 A.D. in prayer and fasting; and Blarney Castle, where a kiss of its renowned stone promises the gift of eloquence.

“I feel that I have become closer to God and my faith,” Ms. Connelly said of the pilgrimage. “The many places we visited had spiritual significance and I felt the presence of God with me at these places. I visited many of the adoration chapels when we found them and wanted to be with Him personally.”

For Elizabeth Hart, a member of St. Catherine Labouré Parish in Harrisburg, the Mass and visit at the Basilica of Our Lady of Knock was the most moving experience.

In 1879, the Blessed Mother, St. Joseph, John the Evangelist, angels and the Lamb of God appeared before 15 people of varying ages on a rainy evening.

“We attended a healing Mass at the basilica, and it was very touching to see the people who came here for not only physical healings, but for spiritual healing as well,” Ms. Hart told The Catholic Witness via e-mail while on the pilgrimage. 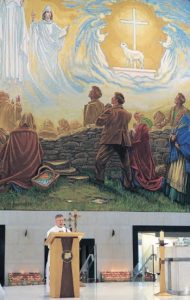 Deacon Tom Lang delivers the homily during Mass at the Basilica of Our Lady of Knock.

“There is an anointing of the sick before the offertory part of the Mass. For me, this was a very emotional time and I could not help but think of all of the mercy that God gives to us,” she said.

“Traveling with other pilgrims really has given me a chance to share my faith with others and also receive great insight on other people’s spirituality,” she remarked.

“Even though there are elements of this trip that are like a vacation, I don’t think anyone has lost sight of the main reason we are here,” Ms. Hart wrote. “Being able to attend daily Mass and receive the Eucharist and saying Rosaries and other prayers while riding from place to place on the bus provides time for reflection and draws us closer in communion. Ireland is such a beautiful place where you can really experience God’s creation in all its glory.”

Still, one doesn’t have to travel overseas for a pilgrimage, she said, pointing to historic churches within the Diocese of Harrisburg – and the pilgrimage to the National Shrine of the Immaculate Conception in Washington, D.C., on Nov. 3 – as perfect opportunities.

“Every person on pilgrimage comes with their own personalities, backgrounds and opinions…. At the end of the day, when we all go to Mass, in my own experience, I am reminded that we are all part of the Body of Christ and it becomes easy to put aside whatever worldly differences that we may have,” Ms. Hart said. “That is one of the beauties of the Catholic faith for me.”