In the Catholic Church, few topics are more sensitive – and perhaps more misunderstood – than annulments.

An annulment is a declaration of invalidity by a Catholic Tribunal that a previous marriage was not valid according to the teachings of the Church.

In the Diocese of Harrisburg, the mission of the Tribunal is to reflect and experience Christ in the ministry of justice through the compassionate and equitable application of Church law, to protect the rights and dignity of each person without discrimination, and to provide an opportunity for healing.

Divorced Catholics can seek an annulment if they wish to remarry, or to bring closure to a previous marriage. They can continue to receive the sacraments if they live according to Church teaching; divorce itself is not a sin, nor does it excommunicate someone from the Church.

“The annulment process doesn’t look at the legality of marriage; it is concerned about the spiritual,” Father Clark said.

The Church teaches that divorced Catholics who remarry without an annulment are not permitted to receive Holy Communion. An annulment, therefore, “brings them back into the sacramental life of the Church” by nullifying the first marriage.

Examining the Bond of Marriage

The Church teaches that marriage is a lifelong bond between a man and a woman. Marriage is a sacrament, and its bond is presumed valid, even if a couple gets divorced. Still, the Church knows that there may be times when an element necessary for a valid marriage is missing.

These can include flaws in the form or consent in the marriage itself, such as a lack of witnesses or vows. Others include an impediment, such as spousal abuse or a prior bond.

“When two people marry, their lives are joined together. Imagine them as two bowls joining together, with glue around the rim,” said Barb Bettwy, Canonical Consultant and Judge in the Diocesan Tribunal.

“For an annulment, we look to see if there was something defective in that bond that, over time, formed a crack that eventually broke the whole union. Maybe no one knew it was there at the beginning, but it caused the marriage to end. If we can prove it was there at the beginning, we can say the marriage was invalid, the bond never formed,” she explained.

In the Diocese of Harrisburg, the cost is $450 for a formal case – one-third of the actual cost to process one.

“An annulment costs three times as much as the fee we ask. The other two-thirds is paid by the people of the Diocese through the Diocesan Annual Campaign,” Bettwy said.

“We see this work not only as a matter of mercy, but one of justice,” she said. “The Church teaches that everyone has a right to marry. But if that right wasn’t used validly, then, in effect, you haven’t used it. It’s a matter of justice to restore that right.” 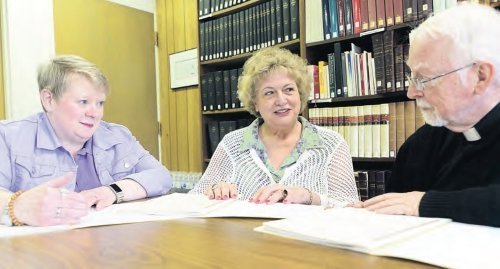 Divorced Catholics – and divorced non-Catholics who wish to marry a Catholic – can seek an annulment through the Diocesan Tribunal.

The process includes initial paperwork, and meetings with an assigned case assessor who will collect information to determine what might make an annulment appropriate for the case. Assessors are located in parishes throughout the Diocese.

“As assessors, we are often the face of the Tribunal, because most of the petitioners won’t see the Judicial Vicar or any of the Judges,” said Sandy Despeaux, of St. John the Baptist Parish in New Freedom.

She has been an assessor since 2007, and has met with petitioners who were nervous or worried about sharing their experiences, or who had misconceptions about annulments.

“Talking to them face to face, I can convey the comfort I want to give them. I can convey what I’m trying to be for them,” Despeaux said.

At the initial meeting, she talks to petitioners about family, interests, life in general.

“I’m not jumping right in to what they think the problem was with their marriage,” Despeaux said. “It might be 45 minutes of chatting until we get to that point. I’m not reacting or judging; I’m just listening and asking questions that will me help the Judges.”

“I’m always astonished at the level of trust the petitioners place in the assessors. I have to ask compassionately what went wrong, and sometimes they will tell me things that are horrible,” she said. “I am amazed at their trust. They just want to put those things behind them, and that can bring closure and healing.”

“We are patient, kind and nonjudgmental in the process,” Despeaux said. “We consider it our privilege to help people through it. The annulment process can be hard work, but it’s not insurmountable.”

Remarrying outside of the Church “was not an option” for one Diocesan parishioner who received an annulment for his first marriage.

“My Catholic faith has always been important to me. In addition to the legal closure of divorce, I knew that I would eventually want to complete the annulment process to bring myself spiritual closure,” said the man, who wished to remain anonymous in the interview with The Catholic Witness.

He applied for an annulment when he began dating again.

He said he gained understanding about the depth of the investigation and the deliberation involved in the process when the grounds he initially selected for the annulment were replaced by a different set of grounds.

“The rejection of my choice was hard to take at first, but after some time I realized that the revised grounds were fairer and accurate,” he reflected.

“The annulment process can be humbling if you enter it as I did: seeing things from my perspective only and not necessarily the whole picture,” he said. “But I believe it is worth the wait and the scrutiny to be able to move forward from a difficult time with understanding and closure.”

Those who wish to seek an annulment can begin the process by contacting the Tribunal at 717-657-4804, by completing an online form at www.hbgdiocese.org/tribunal/divorce-and-remarriage/ or by attending annulment presentations the Tribunal gives throughout the Diocese each year.

“Christ encourages us to lay our yoke on him. Sometimes in marriage, people have suffered physically, emotionally and spiritually,” Father Clark said. “It is our goal to help them lay their burdens at the feet of Christ, walk compassionately with them, and restore them to a closer relationship with Jesus. This is the mercy and justice of the Church, and the Church loving them back into the fold.”
To learn about annulments and the work of the Diocesan Tribunal, visit www.hbgdiocese.org/tribunal/divorce-and-remarriage/.

To learn more about the Diocesan Annual Campaign, including how you can support the important ministries of the Diocese, visit www.hbgdiocese.org/giving/diocesan-annual-campaign.

To learn more about Common Myths about Annulment, visit https://www.hbgdiocese.org/tribunal/divorce-and-remarriage/12-myths-about-marriage-annulments/.