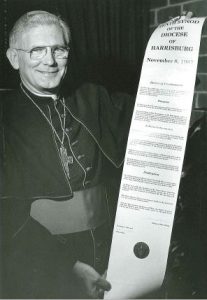 Bishop William Keeler displays the decree convening the Tenth Synod of the Diocese of Harrisburg in 1987. The purpose of the Synod was to convene the members of the diocese in an effort of deepening the understanding and practice of the faith, and to examine the work of the Church regarding the day’s challenges.

Opus Fac Evangelistae. “Do The Work of an Evangelist.”

The Episcopal motto of Cardinal William H. Keeler embodied every aspect of his ministry. Evangelization was a hallmark of his service to the Church, say those who worked closely with him in the Diocese of Harrisburg.

His desire to inspire the people of Harrisburg in the work of evangelization was enfleshed in the Tenth Diocesan Synod, a vast undertaking in the late 1980s in an effort to bring to the diocese a greater awareness of what the Second Vatican Council sought to accomplish for the universal Church: a clarifying and deepening of the faith and a re-examination of the Church’s mission to meet the challenges of the day.

The Synod was aimed at convening the diocese in making decisions for the good of the local Church. “Bringing in opportunities for evangelization to take place was the hope for the outcome,” said Mary Ann O’Donnell, who was serving in the Office of Pastoral Planning at the time.

As she recounts, the initiative called small for groups to meet at the parish level and – after thoughtful discussion upon reflecting on diocesan-created workbooks and videos – present ideas and focus points for ministry. The parish-level results were then compiled and refined at a regional level, and subsequently collected at the diocesan level.

The parish groups met at various intervals over the course of a year and half, and the Synod culminated with the presentation of 52 Acts that attendees ranked in order of importance. At the top of the list was the religious education of children.

Diocesan ministries were subsequently directed to focus their ministries on the top Acts, and out of the Synod came a diocesan-wide focus on the top priorities such as the education of young people, youth ministry, and evangelization.

“Ultimately, Bishop Keeler led everyone into this process of involvement and participation in a way that they could not have imagined,” Mrs. O’Donnell said of the Synod. “People in parishes were leading small groups, creating hospitality, meeting people they hadn’t met before, and thinking about how they wanted to live their faith. And that’s the whole spirit of evangelization!”

“At the final ceremony to close the Synod, everybody cheered because of the sense of togetherness and the sense of accomplishment. The Synod had involved people at every level, starting with the parishes up to diocesan administration. Everyone was represented,” she said.

Through the Synod, Bishop Keeler “wanted to evangelize and update the diocesan Church, wanting things from the Second Vatican Council to be implemented as much as possible so that people could deepen their faith,” said Msgr. Hugh Overbaugh, who worked with Bishop Keeler in his roles as Diocesan Chancellor and Diocesan Vicar General.

Serving in the Diocese of Harrisburg as priest and bishop, the work ethic of the eventual cardinal was next to none, Msgr. Overbaugh said. 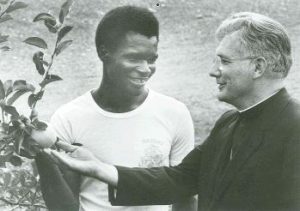 Bishop William Keeler meets with a migrant worker at the migrant camp in Bendersville.

“When I was his master of ceremonies and we would go out to a parish Mass or a Confirmation, he would get into the car and get on the Dictaphone and start working right away,” he said. “Once, he invited me to go with Msgr. [Thomas] Smith and Bishop [Martin] Lohmuller to the Island of St. Martin, and all during that week of vacation, he was working.”

“He worked so hard, and tirelessly,” he continued. “At times, when we would plan to have a conference in his office, his desk and office would be so full with paperwork that we’d have to move the meeting to another room.”

Despite that work effort, he was never too busy to engage the faithful on a personal level.

“His work ethic was very evident. At the same time, I saw his pastoral zeal. He would often have us make detours to visit sick priests in the hospital or in rectories. He was always very solicitous for the welfare of our priests. He was also always reaching out to others who were sick, including those who were battling cancer. He was devoted to the spiritual and pastoral care of cancer patients.”

Bishop Rhoades, the Ninth Bishop of Harrisburg and current Bishop of Fort Wayne-South Bend, saw that care in regards to his own mother who, after a nine-month battle with cancer, died on October 30, 1994 – the day of the announcement of Bishop Keeler’s appointment as a cardinal.

“I will always remember that he called me that day to extend his condolences,” said Bishop Rhoades. “I was surprised, given how busy he must have been that day with all the media, etc.  When I mentioned this to him, he said to me, with his characteristic humility, that what I was going through was much more important than his appointment, since I was dealing with the passing of my mother into the Lord’s hands. He assured me of his prayers and Mass for my mother. I was very touched by his compassion and kindness.” 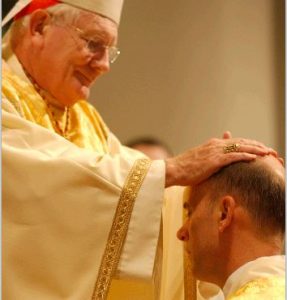 Cardinal William Keeler lays his hands on the head of Bishop Kevin C. Rhoades during the bishop’s Episcopal ordination at St. Patrick Cathedral in Harrisburg on Dec. 9, 2004. Cardinal Keeler and Bishop Rhoades are both sons of Assumption of the Blessed Virgin Mary Parish in Lebanon and graduates of Lebanon Catholic High School. As a priest of the Diocese of Harrisburg, then-Father Rhoades served as Bishop Keeler’s assistant Chancellor.

Throughout his service to the Church as priest, bishop and cardinal, Cardinal Keeler’s compassion also extended to the Hispanic community, especially in the Diocese of Harrisburg.

In 1979, he approved the purchase of a former Greek Orthodox church in York for the first Spanish-speaking church in the diocese.

“He gave them their own home, and in so doing, told the Hispanic community and the migrant community that they are important,” reflected Father Bernardo Pistone, who served as Vicar for Spanish-Speaking Catholics several years after the formation of the Diocesan Hispanic Apostolate, initiated by Bishop George Leech in 1974.

“It was a very important ministry to Bishop Keeler as well,” Father Pistone reflected. “He wanted to make sure that we took care of all the migrants and the newly-arrived people in our diocese. Hispanic ministry in the diocese would not be where it is today without his leadership.”

“When we would call to say that a celebration was happening, he would be there. We had someone who celebrated their 50th anniversary, and he came, and that was so special and unusual for a little Catholic Hispanic parish to have the bishop come to share in their celebrations,” Father Pistone said.

“Without question, he was motivated by the Gospel value that the poor and the marginalized have a preference in the Church. They were close to his heart,” he said. “Migrants were arriving here, the poorest of the poor, and he made them a preference.”

“Cardinal Keeler just loved the Church so much, and had a love certainly for the Diocese of Harrisburg,” observed Msgr. Overbaugh. “He was faithful and devoted to our diocese, and wanted the best for it and its people.”

“He was a great communicator, in what he wrote, in his phone calls to people who were sick, and in his connections with every person he met,” Msgr. Overbaugh said.

“It was regrettable that with his illness in his last years, he unable to communicate in that same way. The suffering must have been difficult for him, a man of such intelligence and intellect,” he reflected. “But the way in which the Lord saves the world is through suffering, and I’m sure that Cardinal Keeler probably saved many in these last years.”