Diocese’s New Speakers Bureau Leads off with Bishop’s Presentation on St. Thomas More and the Formation of Conscience 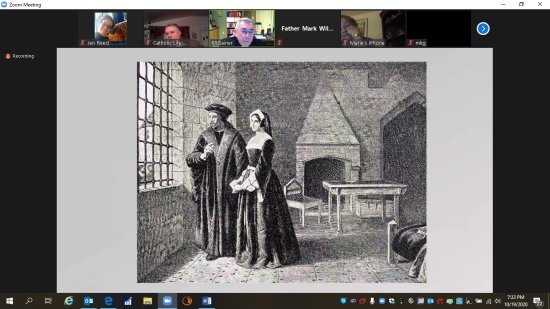 A new educational program offered by the Diocese kicked off with a presentation on the formation of conscience and the example of a saint who gave his life rather than compromise it.

Bishop Ronald Gainer was the inaugural speaker for the Diocese’s new “Truth, Beauty and Goodness Evangelization Speaker Series.” The series will feature speakers from the Diocese and beyond, with monthly sessions now through August of 2021.

The series began the evening of Oct. 19 with the bishop’s presentation, “His Majesty’s Good Servant, but God’s First: What St. Thomas More Has to Teach Us about Conscience and its Formation.”

The series is a new evangelization initiative of the Diocese, “focusing on the transcendentals of Truth, Beauty, and Goodness focusing on those attributes, found in their fullness in God Himself, that also draw people to God and to His Catholic Church,” said James Gontis, Director of the Office of Evangelization and Catechesis.

“This is a new initiative offered by the Office of Evangelization and Catechesis that I hope will be instructive, informative, and inspiring for the faithful and for anyone who is seeking truth and enjoys being captured by beauty and encouraged by goodness,” said Gontis. “I have had it in mind for years and we are actualizing it now.”

“I’m excited by it, because Catholicism is a great adventure,” he added. “The Catechism tells us that Catholics of the first centuries were fond of saying that ‘God created the world for the sake of the Church.’ The Catholic Church is true, good, and beautiful because God is true, good, and beautiful, and the Church is His Mystical Body. So the discovery of truth is exciting, beauty expands and brightens the soul, and goodness moves us closer to the Heart of Jesus.”

Bishop Gainer’s presentation examined the question of conscience through the model that St. Thomas More offers. A devout Catholic, a lawyer, scholar, author, government servant and Lord Chancellor, St. Thomas More was imprisoned in the Tower of London and then beheaded by the order of King Henry VIII for refusing to sign the king’s Act of Supremacy – making him head of the Catholic Church in England – and Act of Succession – that only his children with Anne Boleyn, and not of he and his wife Catherine of Aragon, would be successors to the throne. 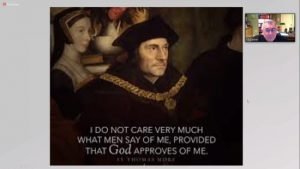 He could have signed the king’s acts and spared his life. Instead, he refused “in an act of profound obedience to the truth,” Bishop Gainer pointed out.

“Today, elected and appointed public officials often quarantine their consciences from their public acts…. More gave up his life rather than separate his conscience from his public acts,” he said.

“How we answer ‘What is conscience? How does it work? What are we to do with it?’ affects every response to every moral question and our understanding of human existence,” he said. “Today, conscience is considered by many as a subjective and – at the same time – infallible capacity for moral judgement.”

That concept is wrong, the bishop said.

“If every person were able with absolute certainty to declare for himself or herself what is morally right or wrong in every circumstance, there would be no need for moral norms,” the bishop stressed.

“Conscience must be educated in a firm Catholic faith, trust in God, study and reflection on Church teaching, prayer, the sacraments and spiritual discipline,” he said.

St. Thomas More shows us “conscience proper – that interior voice within a person where the law of God is inscribed,” he said.

The conclusion of the presentation offered time for questions from the attendees who joined virtually.

Each session in the series will include a one-hour presentation, followed by 30 minutes for questions and answers. The series is offered free of charge; free-will donations will be accepted.

A list of upcoming topics is provided below. Watch The Catholic Witness’ Notebook page for full announcements about each session and how to sign up.