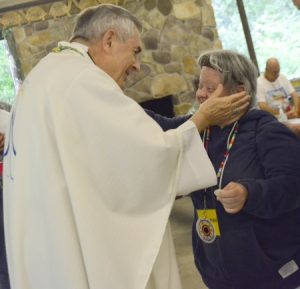 In mid-August, Caitlin Nealon made the nearly 3,000-mile journey from her home in San Jose, Calif., to Lebanon County for the Diocese’s annual camp for people with disabilities.

A highlight of the summer for more than 30 years, the week draws both new and returning campers and counselors to Camp Kirchenwald for hiking, fishing, arts and crafts, swimming, a talent show and – most importantly – camaraderie.

“I’d do anything for them. I love these guys,” Nealon said as she watched campers play games and relax in hammocks outside their circle of cabins.

Nealon, who grew up at St. Patrick Parish in York, was a teenager when she started volunteering at the camp for people with disabilities 15 years ago.

“The people keep me coming back – that’s 100 percent why,” she said. “With the campers and the other staff, I joke that everybody is camp family. There are a handful of volunteers who have been here as long as I have, if not longer. You get to know them. Many of the campers become family as well, because you see them year after year.”

Now a resident of San Jose, Nealon designates vacation time to return as a counselor. 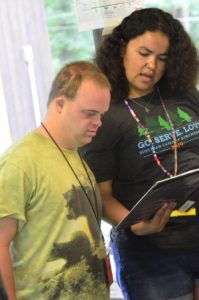 Matt Ross and Rachel Frometa share a music sheet for Mass on Aug. 15.

“When I first started, we had a camper who had Autism and was nonverbal. The last year that she was here, she was almost using full sentences. She went from a point where she would point at things and grunt, to using sentences: ‘I want juice.’ It’s amazing, and it brings me so much joy! I soak up as much of it as I can, just from the campers.”

A ministry of the Diocesan Office of Ministry with People with Disabilities, the camp is a summer staple for its annual attendees.

Activities at this year’s camp, Aug. 11-16, included the usual arts and crafts, games, swimming and nature walks, as well as a visit from “The Bug Man,” interaction with goats, rabbits and chickens on the camp’s property, and Mass celebrated by Bishop Ronald Gainer on the Feast of the Assumption of the Blessed Virgin Mary.

The Office of Ministry with People with Disabilities welcomes volunteers to assist each year; without their help, the camp couldn’t be offered to those who enjoy its respite each year.

“They are the most amazing people you’ll ever meet,” Nealon said of the campers. “Some of our campers are artists, and they’re coming to camp to get a chance to do a lot of art and spend time in the craft lodge. Some of them are athletes, so they come to camp to hike or fish or swim.”

“Our campers all bring their talents, hang out with us for a week and maybe try something new and get some freedom to make choices in what they’re doing,” she said. “The same way when you’re a kid and you go to summer camp and get that taste of freedom, our campers get the same thing here.”

Volunteers can serve during the day or for the entire week, with overnight accommodations in the cabins. While knowledge of fishing or arts and crafts can be helpful, previous camping experience isn’t necessary to volunteer.

Take Lauren Kofalt, for instance. The 17-year-old member of Queen of Peace Parish in Millersburg had never camped before this year’s week in Kirchenwald’s woods.

Her mom saw an ad for volunteers, and thought it would be a good idea for Lauren to serve. 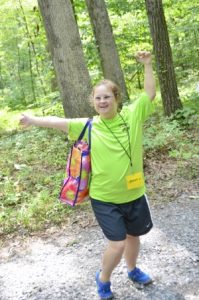 Jenny Laudeman expresses her excitement about the activities at camp.

“We don’t have a lot of people who have special needs in Halifax, because we’re such a small town, so I was unsure of what to expect,” Lauren said.

She said she was a bit nervous about interacting with campers at first, but the feeling quickly dissipated. In fact, as the week went on, Lauren felt drawn to working the campers who needed a bit more attention and assistance.

“The week opened my eyes to how people with specials needs don’t have special needs all the time. They have needs and emotions like everyone else. You help them learn to be more independent. I’ve learned that just because they have special needs, it doesn’t mean they need everything done for them. They can do what anyone else can,” Lauren said.

“I was excited to help out and be where I needed to be for them,” she said.

Being “where she needs to be” for the campers means traversing the country for them.

“I wouldn’t want to be anywhere else,” she said. “It’s the highlight of the summer.”

“Camp is definitely for anyone open to a surprise,” she reflected. “I didn’t have any skills when I started as a volunteer. I was a teenager. I knew nothing. Most of what I know about how to work with people with a specific set of needs, I’ve learned through camp. It’s good for anybody, as long as you’re ready to rise to a challenge and open yourself to being surprised – by yourself and by those around you.”

(A video about the camp will be posted at www.youtube.com/hbgdiocese. To inquire about volunteering, contact Larry Kiley at 717-657-4804, ext. 322, or lkiley@hbgdiocese.org.)