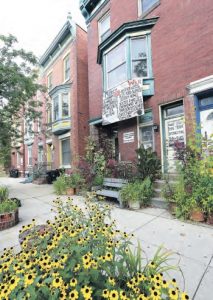 Let’s say that my attempt to multiply the recipe was a bit overzealous. Needless to say, I had a HUGE amount remaining. As I put the leftovers away in the refrigerator, I said to myself, “Too bad that there is so much left over! I wish I could share this with someone looking for a meal.” It never ceases to amaze me how God answers prayers. Let me explain.

About two hours after supper, it became obvious that the furnace in the convent was not working properly. A phone call was made for a repairman, and within a short time after the call, the back doorbell rang. Thinking it was the furnace guys, I opened the door without looking through the window. To my surprise, there was a gentleman standing there in a threadbare sweatshirt asking for food. I said, “Yes! Glad that you are here!” I heated up the mac and cheese, made fresh coffee, gave him a bowl of salad as well as a heated roll, and then a piece of chocolate pie for dessert. I sat with him while he ate, allowing him to steer the conversation as I sipped a cup of coffee. Still having a bit mac and cheese left over, I packed a small container for him to take.

As I opened the door to let him go, the furnace guys came in to fix our heating problem. God did indeed answer my prayer, because he was the only person who ever came knocking at our door in the ten years that I lived at that convent!

I could not help thinking of this story as I began doing research on our next Servant of God:  Dorothy Day. She was, according to Wikipedia, “an American journalist, social activist, and convert. She later became a key figure in the Catholic Worker Movement and earned a national reputation as a political radical, perhaps the most famous radical in American Catholic Church history. In the 1930s, Day worked closely with fellow activist Peter Maurin to establish the Catholic Worker Movement, a pacifist movement that combines direct aid for the poor and homeless with nonviolent direct action on their behalf. She practiced civil disobedience, which led to several arrests.  …. Pope Benedict XVI used her conversion story as an example of how to ‘journey towards faith… in a secularized environment.’ Pope Francis included her in a short list of exemplary Americans, together with Abraham Lincoln, Martin Luther King, Jr., and Thomas Merton, in his address before the United States Congress.”1

Her legacy is very apparent to those volunteers and employees who minister in the Catholic Worker Houses in our diocese, in Harrisburg and Lancaster.

As I write these words, I can hear you say, “Gee, Sister, you took a chance with that guy asking for food,” and, “There is no way I can ever do what Dorothy Day did! After all, SHE is to be a Servant of God and her virtues are heroic!” Well, these statements are both true. However, please re-read Day’s idea above about hunger.

I truly believe we Americans are hungry for something simple: faith that is found in the love of an individual. Wouldn’t our society be different if we took the time to look one another in the eye, respected others by our actions and words, and treated everyone – even the forsaken and forgotten – as members of our family that are welcomed around our tables?

This idea is simple, as simple as mac and cheese on a cold day. The challenge that I put forward to you: LIVE IT!

By Sister Geralyn Schmidt, SCC, Special to The Witness