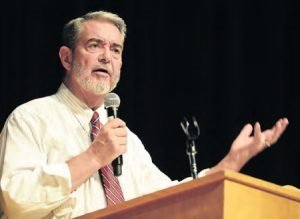 The state of the Church and the results of a recent Pew Study weighed heavily on the heart and mind of Dr. Scott Hahn as he returned to New Oxford on Aug. 24 to present three talks to nearly 500 attendees from throughout the Diocese of Harrisburg, Maryland and as far away as Scranton.

“This is what he wants to do now with us: bring to us a message of hope,” Dr. Hahn told the crowd about what Christ wants for us in these troubled times. “Hope for hard times because, let’s face it, we are facing hard times that are harder than we expected. We’re facing darkness that has gotten darker than even the gloom-and-doomers were predicting. But as dark as the culture has become, as morally toxic as it is for our young people, I want to say that the Good News is immeasurably better than the bad news is bad.”

Dr. Hahn is the Father Michael Scanlan Professor of Biblical Theology and the New Evangelization at the Franciscan University of Steubenville, where he has taught since 1990. Through his efforts thousands of people have experienced the grace of conversion and have come home to the Catholic Church. The Aug. 24 event was held at New Oxford High School and sponsored by Breadbox Media, a national Catholic podcasting network.

Throughout the day, Dr. Hahn presented talks on The Holy Eucharist, The Marital Covenant as Sacrament, and St. Joseph. The theme of hope was prevalent and offered attendees a boost in their own faith life to take back home to their parishes and families.

Speaking on the importance of the Holy Eucharist, Dr. Hahn remarked, “St. Jerome said ignorance of Scripture is ignorance of Christ…. We might think we can afford to ignore [Scripture] but we can’t, because if we don’t know that Word that is inspirited, we’re not really going to fall in love with the Word that was incarnated, and it comes to us in Holy Communion.”

He also spoke on the mission of The St. Paul Center, an apostolate dedicated to teaching Catholics to read Scripture from the heart of the Church – and of which Dr. Hahn is Founder and President.

“Frankly, I’ve met thousands of Catholics who took religious classes in school and have said to me, ‘Why have WE never learned to read the Bible this way?’ I want to make it so that their hearts are burning, their eyes are opened and they believe in the Real Presence of Christ,” he said.

Attendee Mary Eileen Warfield summarized her impression of the messages Dr. Hahn delivered. “I felt as though God reached out to me to take me deeper into his Word. As though he drew me closer to himself to give me consolation. I read Scripture daily but there is so much that I missed. I – we – needed this day!”

Dr. Hahn concluded the day with this message: “When we get home, when we get to heaven and we see the face of the Father, when we see the face of the Blessed Virgin the Mother of God, when we look upon Jesus and realize he is a first born like no one could ever be, this is a family, this is a homecoming, this is a reunion that never grows old. God loves us just the way we are but he loves us too much to leave us that way because he knows we’ll never make it home, we’ll never be holy, we’ll never feel at home in heaven. Unless and until we allow the divine sculptor to use painful circumstances like different chisels to hammer away at our hardness and pride, then he will sculpt us as saints. And that’s all saints are, those who have survived and graduated from the school of suffering. So all we have do now is humble ourselves as children of God, as spouses, as parents, as grandparents, as godparents. Single, married, divorced or widowed, we are beloved children of God, and when we ask him for these things, we’ve got to believe that he wants to make us holier than we want him to.”

“In the New Evangelization, you are called to go out and speak the word of God to others. It may be just the people in your home, which may be the hardest ones to talk to,” she said. “We’ve given the tools today through the talks and the materials to take this message to other people. Sometimes, you need another voice to share what God has put on your heart. Sometimes the messenger can’t be us. Being able to share a podcast, to share someone else’s words that you can point to and say, ‘Listen, they are where you are and they found God,’ may be exactly what they need.”

By Pete Socks, Special to The Witness