At Baptism, new Christians are anointed with holy oil and become members of the Church, sharing in Christ’s priestly, kingly and prophetic vocation. The newly baptized also inherit a mandate from Christ to be his witnesses before the world and to proclaim his Gospel by word and example.

Supporting the Spread of the Gospel

It seems hard to believe that there are still billions of people who have not yet heard the “Good News” of Jesus. That is why the Pontifical Mission Aid Societies exist in the Church: namely, to promote mission awareness among the baptized and support for the spread of the Gospel. The Diocese of Harrisburg has been blessed with generous and faithful people who respond with sacrificial generosity to these mission aid societies. Since the Missions Office began in the diocese in 1924, countless missionaries have benefited from the prayers and support offered year after year. Thank you for answering the call to the ‘missionary spirit’ through your support of this holy work of the Church. 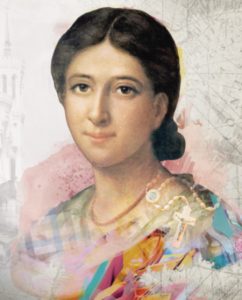 Her simple but passionate acts of charity in a small town in France blossomed into one of the most impactful missionary organizations in our world today: the Propagation of the Faith, one of the four Pontifical Mission Societies.

Pauline Marie Jaricot was beatified on May 22, 2022, in her birthplace, Lyon, France, following recognition of a miracle attributed to her intercession. The event took place during the 200th anniversary year for the Society for the Propagation of the Faith.

The Pontifical Mission Societies in the United States have produced a film, Heart of a Missionary: The Story of Pauline Jaricot, about Pauline’s life. BlessedPauline.org

The international Pontifical Mission Societies also produced a short film, “Look From Above,” presenting the story and experience of faith of Pauline Jaricot narrated through the eyes and live of Claire, a young woman of our time. The filming locations include places where Pauline lived and worked.

The Pontifical Mission Societies include:

These Societies operate under the direct canonical jurisdiction of the Holy Father through the Congregation for the Evangelization of Peoples in Rome, with national offices in more than 120 countries around the world. The national office of the Pontifical Mission Societies in the United States is located in New York City, and the national director is Reverend Andrew Small, OMI. In addition, every diocese in the United States has a diocesan director who is appointed by the local ordinary (bishop) of that diocese.

The Societies gather basic support for more than 1,150 mission territories in Asia, Africa, the Pacific Islands, Latin America, and some parts of Europe, including clinics, orphanages, and schools where the poorest of the poor receive an education, health care, and come to know the reason for all our hope. The Societies also provide support for 80,000 seminarians and for the training of 9,000 religious Sisters and Brothers. From South Sudan to Western Samoa, Syria to Saigon, the Pontifical Mission Societies are on the front lines where God’s people are suffering.

Participating in the Missions

Q. How can I help the Missions of the world through the Pontifical Mission Societies?

A. All baptized Catholics have the opportunity to participate in the worldwide mission of the Church by offering their prayers, personal sacrifices, and/or financial contributions

Q. I would like to serve as a lay missionary. What should I do?

A. There are a number of local and national organizations that help connect lay Catholics to mission opportunities in the United States and abroad. Contact the Catholic Volunteer Network, a national membership organization of Christian volunteer and mission programs that fosters and promotes full-time national and international service opportunities for people of all backgrounds, ages, and skills: www.catholicvolunteernetwork.org/ or 1-800-543-5046. Catholic Volunteer Network member programs have volunteer positions available in all fifty states, the District of Columbia, and in over 100 countries across the world, ranging from a week to a summer to a several-year commitment and everything in between.