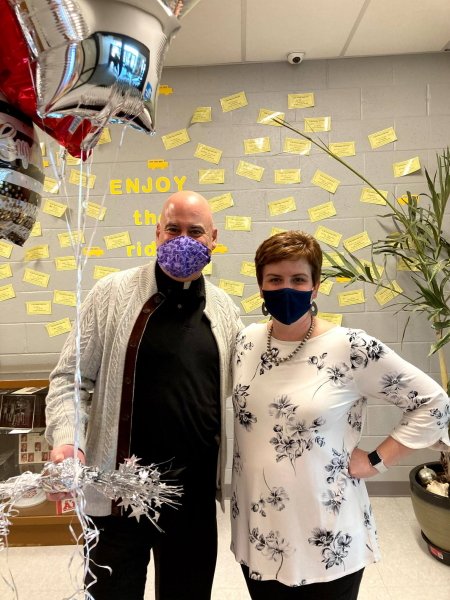 Excitement abounded at St. John Neumann School in Lancaster on March 9 as Father Dan Powell, pastor, received the “Lead. Learn. Proclaim. Award” from the National Catholic Education Association. This award recognizes outstanding contributions and achievements related to Catholic Education. Only three pastors are selected annually to receive this national award. The surprise announcement was made following the morning recognition of student achievements.

“I thought I was there to encourage our students to use the gifts God has given to them to the best of their ability. I did that and then all of a sudden the focus shifted. I was speechless. At first I did not completely understand what was happening. Once I understood what was happening, I felt very humbled. I also thought of all the other people who were a big part of making this relocation of our school a reality. I am honored this award can bring to light all the fine work so many have done,” said Father Powell.

Kyla Hockley, principal of St. John Neumann School, which opened its doors for the first time in September of 2020, said she nominated Father Powell for this award because he has “ignited, united, or inspired students and families,” both at St. John Neumann and previously at St. Anne’s School in Lancaster.

Hockley explained in her nomination video that because of Father Powell’s leadership, the dream of moving the school from St. Anne’s to St. John Neumann’s campus was achieved.

“Father Dan ignited, inspired and united parishioners and the wider community to bring this dream into reality. The capital campaign lunched in the midst of the Grand Jury Report being released, continued through the Diocesan bankruptcy process and completed in the midst of a global pandemic. Each step of the way, Father Dan asked everyone to trust in God’s plan and thus severed as an example of humble faith, inspiring, uniting and igniting the faith of our community. Our school is open, it’s thriving, enrollment is up and that is a great deal in part to Father Dan Powell,” said Hockley.

Parents and special guests from the Diocese of Harrisburg joined the Zoom call to congratulate Father Powell, who was met with cheers and applause from students and staff.

“I’m so happy to be with you this morning and Father Powell, congratulations. This is a great honor for you, for St. John Neumann Parish and school, and for the Diocese. To be among three pastors honored, it is well deserved,” said Bishop Ronald Gainer. “Father Powell, you have been extraordinary in your commitment, throughout your priesthood, to Catholic education. But most recently, in these very challenging times with so many headwinds, to take on this project of a new school building, opening St. John Neumann School with such success and a promising enrollment, and an even greater enrollment already for next year, you’re a great witness and example to all of us for the importance of Catholic education and the importance of the involvement of the pastor in that ministry in our Church. I’m so grateful to be with you this morning to share in this assembly and to congratulate you and to wish you every blessing as the school continues to grow and to thrive.”

“We are so excited to thank you for your work and to honor you,” said Kathy Mears, interim president and CEO of NCEA, who virtually presented Father Powell with his award. “You are beloved and you very much exemplify what we want to see in pastors and the work they do. You have gone above and beyond.”

“I am thrilled that Mrs. Hockley nominated Father Powell because our pastors do remarkable work supporting Catholic education, and many of them are unsung heroes.  Father Dan deserves to be ‘sung!’” said Dan Breen, Secretary for Education and Superintendent of Catholic Schools for the Diocese. “In many ways, Father Dan’s efforts to establish St. John Neumann Catholic School are representative of the remarkable effort all our Catholic schools have made over the last year. In Father Dan’s case, the effort goes back several years. He has persevered through all the uncertainty and effort of taking the community from St. Anne’s School to St. John Neumann, including the pandemic, its impact on the construction schedule and the school calendar, and so much more.”

Relying on the Holy Spirit

The recognition this award brings is a sign that the Holy Spirit has been at work throughout the entire time of planning, moving and opening St. John Neumann Catholic School, said Father Powell. He explained that in the summer of 2017, plans were made to move the school, with fundraising commencing just a few months after the release of the Pennsylvania Grand Jury Report in 2018. Trusting in the Holy Spirit, the parish persevered and, without borrowing any funds, was able to commence construction in January 2020. When the pandemic hit in March, construction was halted for eight weeks, casting doubt on whether the school would be completed in time to open at the start of the 2020/21 school year. Because of the tireless work of the construction team, lost time was made up and the school opened for in-person classes on September 8, 2020.

“Celebrating Father Dan’s reception of the “Lead. Learn. Proclaim. Award” is like the cherry on top of an amazing year! Building a school during a pandemic, moving in with less than two weeks to get unpacked and open, and operating with safety restriction in place might sound awful, but Father Dan has met each challenge with trust in the Holy Spirit and his faith has served as an inspiration for our entire community to do the same,” said Hockley.

“Despite all the odds and all the circumstances which were beyond our control, our efforts succeeded. When we listen to the guidance of the Holy Spirit and place our trust in Him amazing things can happen. Our prayers and financial support made a difference and will continue to make a difference in the lives of many children and families,” said Father Powell. “Being awarded a 2021 National Catholic Education Association “Lead. Learn. Proclaim. Award” has been an extremely humbling experience. There have been so many who have gone before me who built the foundation which made this all a possibility. So many others have worked tirelessly behind the scenes to ensure the successful construction and opening of our school. Many people contributed financially and with their prayers. I accept this award for them, or our entire St. John Neumann Parish and School community. We are a family of faith. We have been brought closer together through the adversity we have experienced. We will continue to move forward in faith trusting the Holy Spirit walks with us and we are never alone.”

The “Lead. Learn. Proclaim. Award” from NCEA, now in its sixth year, recognizes the “outstanding efforts, contributions, and achievements on behalf of Catholic school education,” according to NCEA’s website. The program is open to Catholic school administrators, pastors and teachers that have served in Catholic education for at least five years.

To learn more about the NCEA, please visit www.ncea.org. More information on St. John Neumann School can be found at www.sjncslancaster.org.