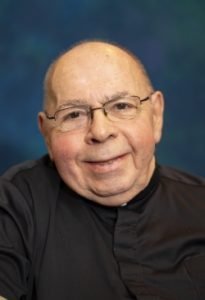 Father Francis T. Menei, 80, died June 6 at Misericordia Nursing and Rehabilitation Center in York. He had been a priest of the Diocese of Harrisburg since 2002.

He was a graduate of the Philadelphia Public School System and St. Charles Borromeo College and Seminary, Overbrook, and obtained his Masters Degree at the University of Notre Dame.

Father Menei was ordained on May 20, 1967, in the Cathedral of Sts. Peter & Paul in Philadelphia. From 1967 to 1969, he served as a parish priest in Philadelphia, and from 1969 to 1979 was a teacher at Cardinal Dougherty High School. In 1979, he was named Chaplain of the Philadelphia Prison System, and shortly afterward at Graterford Penitentiary. He later became Chief Chaplain for the entire Commonwealth of PA State Penitentiaries, with his office in Camp Hill and his residence at St. Ann’s in Steelton.

In 2002, Father Menei transferred to the Diocese of Harrisburg and was appointed pastor of St. Richard Parish in Manheim, where he served until his retirement in June of 2014. Upon retirement, Father Menei served as spiritual director for the North American Lourdes Volunteers, an association that accompanies people with serious illnesses and disabilities to the holy site of Lourdes, France. As spiritual director, Father Menei offered daily Mass for the association, and accompanied pilgrims twice a year.

Father Menei was the son of the late Frederick J. and Rose M. Covello Menei and is survived by a brother, numerous nieces, nephews, great nieces and great nephews.

The Mass of Christian Burial was June 14 at St. Catherine Labouré Church in Harrisburg. Burial was in the Priests’ Circle at Holy Cross Cemetery, Harrisburg. In lieu of flowers, memorial contributions may be made to Misericordia Nursing & Rehabilitation Center, 998 S. Russell St., York, PA 17402.