‘Fatima’ Movie Now in Theaters and On Demand 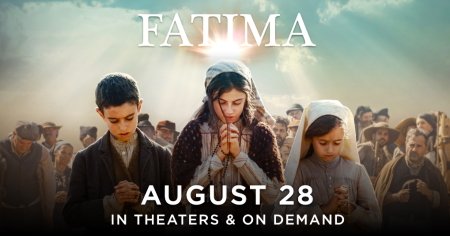 In modern-day Portugal, author and noted skeptic Professor Nichols (Harvey Keitel) visits a convent in the riverside city of Coimbra, where Sister Lúcia (Sônia Braga), an elderly nun, recounts the story of her role in an historic event that took place in 1917. The conversations between pragmatic academic and the spiritual ascetic illuminate a decades-old mystery and set the stage for an inspiring story that has fascinated millions for more than a century.

While wandering in a cave near her home in the hamlet of Aljustrel, on the outskirts of Fátima, Portugal, 10-year-old Lúcia (Stephanie Gil) is visited by an angel who shows her a vision of a battlefield. World War I is raging across Europe and claiming the lives of many young men in Lúcia’s village. In the vision, Lúcia sees her brother, Manuel (João Arrais), a soldier at the front, caught in an explosion. Later, while tending her family’s flock of sheep, Lúcia and her younger cousins Jacinta (Alejandra Howard) and Francisco (Jorge Lamelas) are visited by another apparition, this time of the Virgin Mary (Joana Ribeiro). The “Lady of the Rosary,” as she calls herself, tells the children they must pray and suffer in order to bring an end to the deadly conflict. She also tells them she will return to the same spot every month for six months.

Like many in the town, Lúcia’s devout mother, Maria (Lúcia Moniz), doesn’t believe the children’s story and chastises Lúcia for lying. But as the mayor, Artur (Goran Višnjić), and Church officials try to convince the youngsters to recant their story, word of the sighting spreads. Pilgrims from across the country flock to Fátima hoping to have their prayers answered, but only the children are able to see or hear the apparitions. As more people come, the pressure mounts on officials of the newly installed secularist government to refute the children’s testimony. Artur eventually resorts to imprisoning Lúcia and her cousins, hoping to have them declared insane. But the psychiatrist he enlists to examine them finds no evidence to support that claim and they are freed.

On the day of Mary’s final visit to Fátima, tens of thousands of believers arrive, hoping to witness a miracle that will convince them of her existence. What they experience is still talked about to this day and the site remains one of the world’s most popular destinations for Catholic pilgrims.

The movie is now in theaters and On Demand. Visit www.fatimathemovie.com/.