From Dismissive Shrugs to First Vows 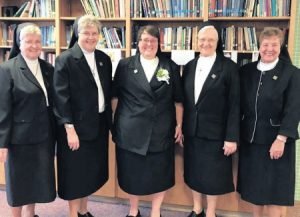 Sister Mary Kate, SSCM, center, a 2003 graduate of Our Lady of Lourdes Regional School, professed her first vows on Sept. 14. She is pictured with Sisters Marcine, Pam, Agnes Marie, and Canice.

Sitting at Mass during her freshman year at Our Lady of Lourdes Regional School in Coal Township 20 years ago, Mary Mensch shrugged off the celebrant’s message about homegrown vocations.

When Father Charles Persing predicted, “There will be one priest and one sister from this student body,” Mensch allowed the possibility to pass right over her, confident that the priest’s estimation was made for another girl.

With certainty, she told herself “It will be somebody else. I’ll never be a religious Sister.”

As it turns out, Father Persing’s prediction was right on target. And Mensch, while conceding that two of her peers certainly could live a religious vocation, missed the mark a bit.

On Sept. 14 of this year, she professed her First Vows with the Sisters of Sts. Cyril and Methodius, as Sister Mary Kate.

The other student at that Mass was Jonathan Sawicki, now a priest, and Director of the Diocesan Office of Vocations.

Living a life in the faith wasn’t foreign to Sister Mary Kate when she was growing up in Elysburg. She went to Mass at Queen of the Most Holy Rosary Parish every Sunday, and welcomed her grandmothers’ own faith journeys – one Catholic, one Methodist – as positive influences. She often walked to church with her maternal grandmother, who lived in Centralia and sang in the choir.

“It was so normal for me to be in the church setting when I was little, but I just never really had the spark for religious life,” Sister Mary Kate recalled.

Though she didn’t feel it, those around her saw it, including a staff member and two Sisters, Servants of the Immaculate Heart of Mary at Lourdes.

“I wasn’t listening to those possible promptings that were so very clear to them,” Sister Mary Kate said.

But one gentle invitation a few years later, as a senior at Bloomsburg University, put her on the eventual path to religious life.

“One of my friends invited me to go to Mass at the Newman House. It was as simple as that,” Sister Mary Kate said.

“I wasn’t as active in the faith as much as I should have been in college. I honestly think that one invitation to get me back to Mass was what sparked me to really start thinking that I was missing something in life.”

Over the next few months, she became involved in parish life at Holy Rosary, and connected with its then-pastor, Father Al Sceski.

She took a full-time job after college graduation, but still felt a longing that she couldn’t quote explain.

“My heart didn’t seem to be into the jobs I had…and I couldn’t shake the feeling that there was something in me, drawing me to God for something more,” Sister Mary Kate said. “I felt like there wasn’t a depth to any of the positions that I had. Yes, they taught me a lot about life, work ethic and dealing with people, but there was a spiritual sense that was missing from them.”

She prayed. She read spiritual books. She looked at religious orders. Still, she felt unsure of the path to religious life that God was putting before her

And then Father Sceski suggested that she connect with the Sisters who were just 15 minutes away, in their motherhouse in Danville.

“He asked one day, ‘How is your discernment going?’ and I just kind of moaned about it. “He said, ‘Why don’t you go up and talk to the Sisters of Sts. Cyril and Methodius?’”

“I’m so happy that he put that out there, and gave me that ‘God-nudge,’” Sister Mary Kate reflected. “I remember sitting in the chapel and saying to Jesus, ‘If you want me here, you have to help me get here, because I can’t do this on my own.’”

Life as a Religious

Sister Mary Kate said she found herself attracted to the Sisters of Sts. Cyril and Methodius because of their Jesus-center and Mary-modeled life, as well as their focus on elder care, ecumenism, education and evangelization.

She became an affiliate with the congregation in 2014, which began her official discernment process in what the order calls a “covenant relationship.” She visited the motherhouse monthly to talk to the Sisters and attend Evening Prayer and dinner with them, and spoke regularly with the Vocations Director.

In October 2015, she applied to the community, a process that included getting medical and financial documents in order, and presenting recommendations to attest to her character.

She entered the congregation in July of 2016, and spent her postulant year in community and prayer. She took classes at the Oblate School of Theology in San Antio while living in community with three other Sisters, and then spent six weeks working with the poor in St. Helena Island, S.C.

Sister Mary Kate was then accepted as a novice, and spent time at motherhouse in Danville, where she studied in-depth about the congregation and grew in her relationship with Jesus. This was followed by parish work in two houses of religious Sisters, in Endicott, N.Y., and in Wilkes-Barre, Pa.

Sister Mary Kate professed her First Vows on Sept. 14 at the Basilica of Sts. Cyril and Methodius in Danville. She is currently assigned at St. Gregory the Great Parish in Bluffton, S.C., where she works at the parochial school and visits those in nursing homes.

She will be in temporary profession for the next three to five years, before making Final Vows.

“The Sisters in our community have offered me so many insights and helped me grow to be such a better person,” Sister Mary Kate said. “They have enriched my life so much, and I am so grateful for every one of them. I try to model what they’ve taught me in focusing on Jesus and a personal relationship with him.”

“This whole experience, this whole process, has been very life-giving for me,” she reflected. “It’s given me the piece that was missing. I feel very full, very complete.”

And now she can’t see herself as anything but a religious Sister.