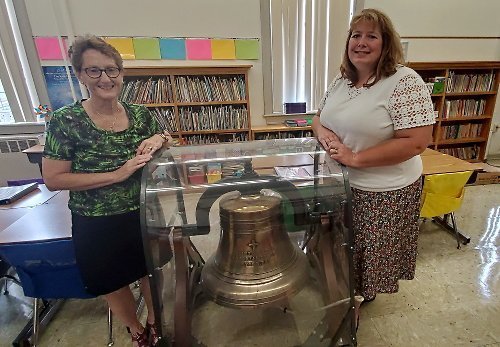 A new Catholic school is open in the city of York, forged from two school communities on mission to strengthen Catholic education in the deanery.

Holy Trinity School, which became official on July 1, is a merger of St. Patrick School in York and St. Joseph School in Dallastown. The new school is located in the former St. Patrick’s building.

The creation of Holy Trinity School is a response to community members’ concerns for continuing Catholic education in the York Deanery, given evidence of declining enrollment and financial challenges.

“We were looking at how we could sustain and strengthen Catholic education,” said Kathleen Smith, formerly the principal of St. Patrick’s and the inaugural principal of Holy Trinity.

Parish and school leadership from both communities examined facilities, resources and populations, and selected to establish the school on St. Patrick’s campus.

“It was a difficult decision, but we’ve come out stronger together as we bring the best of both worlds,” Smith said.

Preparing for the first day of school on Aug. 21, teachers and administrators are setting up classrooms, refining lesson plans and forging relationships.

A new logo and mascot, new uniforms and new signage are currently being revealed.

“I’m excited to see how we’re going to blend into a new adventure,” said Jennifer Dodson, a third-grade teacher who came from St. Joseph School.

Lynda Starceski unpacks items for her first-grade classroom at Holy Trinity. The colorful rug of Jesus with the children comes from the former St. Joseph School in Dallastown.

“We’ve already combined some of the things that were here with what we’ve brought from Dallastown. We’re integrating many things, from physical items like books and desks, to classroom curriculum.”

For Dodson, moving her classroom into a new location is a sort of homecoming. She attended St. Patrick School from kindergarten through eighth grade. Her current classroom was once a computer room.

“I’m very excited for the new year,” she said. “As teachers, we spend time in the summer thinking of new, fun things to bring into the classroom. To do this now in a new place with new students is exciting. I’m looking forward to adding new spins into my classroom here at Holy Trinity.

On the other side of the building, the move wasn’t as far for first-grade teacher Lynda Starceski, who taught at St. Patrick School for 13 years. She relocated her classroom from across the transept of stairs that divides the building.

“Yes, those of us from St. Patrick School are staying in the same building, but it is a new and renewed school as we come together,” she said. “As teachers, we want it to be the best year for the children.”

One of the first things students in her class will encounter is a colorful, ten-foot carpet with a cartoon image of Jesus with the children. The rug will serve as a reading space for students.

The piece, which came from St. Joseph School, is one symbol of the schools’ integration.

“Everybody has been open and supportive through the process,” she said. “We didn’t know how this was going to end when we started, but we put a lot of faith into our leaders here – Mrs. Smith, Mrs. Snyder, Father Carroll, Father Weiss. I firmly believe that Holy Trinity School will keep the presence of Catholic education in the city of York,” she said.

Snyder and Smith said students at Holy Trinity will be the beneficiaries of the best from St. Joseph’s and St. Patrick’s.

“Holy Trinity is offering more than either school could individually,” Smith said.

These include a Spanish class, which had been offered at St. Joseph’s, music and band programs, and clubs.

“Parents are looking forward to see how this new school will be even better,” Smith said.

That doesn’t mean the communities didn’t feel loss when their schools closed.

“Leaving was hard for all of us,” Snyder said of the St. Joseph community. “You could tell by the parents and the kids how much they loved St. Joe’s. We made sure every activity we did at the end of the year was fun. We knew it was going to be hard, but we made the most of it. Most of our kids are continuing in a Catholic school, which is what we wanted. That’s what’s most important.”

Snyder had been at St. Joe’s for 39 years. It’s where she began her teaching career.

“I love Catholic education,” she said. “You can have a stronger relationship with your families and your kids, and the students are like my own kids. There wasn’t anything I wouldn’t do for them, and continue to do for them.”

To help facilitate the change, the school communities hosted meetings for parents, gatherings for families, and “shadow days” for students.

St. Patrick Parish in York invites members of the community for Mass to close the school, Aug. 18 at 10:45 a.m. in Brenner Hall. Come celebrate 168 years of school history and reminisce over years past and the lives that St. Patrick School shaped. A social will follow Mass, with light refreshments in the courtyard and school cafeteria. Alumni are invited to bring old uniforms, report cards and photos to help honor the tradition of the school and its students. Tours of the school will be available. RSVP to Denise Runk at 717-854-8263 or spcsoffice@stpatrickyork.
net by Aug. 14.

Holy Trinity School will celebrate the first day of school on Aug. 21 at St. Patrick Parish. Join the community for the first school Mass, celebrated by Bishop Ronald Gainer at 9 a.m. in Brenner Hall. A ribbon cutting and light refreshments will follow. Visit www.htcsyork.org for upcoming events and activities, and to see the new uniforms. A new school slogan and mascot will be revealed on Aug. 31.

“St. Pat’s was so welcoming to our families, and the parents here in York reassured the parents from St. Joe’s that this change would be okay. The parents here really served as a bridge,” Snyder said. “Our parents are realizing their kids are coming to a school where they will feel loved and safe. I think they were feeling like they were a part of the community before we officially became Holy Trinity.”

“We still have the school’s physical location, and that’s not as painful of a loss because we have our familiar things here, but we’re still changing,” Smith said. “Mentally, we’ve had to shift from our ‘St. Pat’s Pride’ motto and our own ways of doing things.”

“Parents are looking forward now to see how this new school will be even better,” she said. “We want to make it better from both communities’ contributions. We want to be the best we can in working together, educating our kids and helping our families grow.”