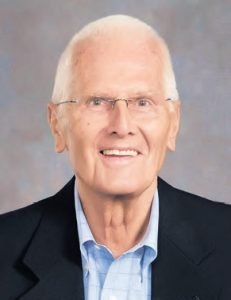 Jim Forjan, shown in 2013, continued to serve at York Catholic until this past fall, more than 20 years after his official retirement.

For nearly 60 years, Jim Forjan invested himself into the York Catholic High School community, as teacher, coach, dean of students, principal and volunteer.

From his first year as a social studies teacher and boys’ basketball coach in 1959, until his last days there as a cafeteria moderator last fall, Forjan rightly earned the titles “Mr. York Catholic” and “the greatest legacy to walk the halls of YC” – accolades members of the school community have expressed since his death on Feb. 15 of this year. Forjan was 83.

The humble coach, teacher, mentor and friend would surely shirk the praise. But he would recognize – as he did in an interview with The Catholic Witness about the endowment fund established in his name – that he was “the vehicle” that carried forward “York Catholic High School and what it stands for.”

“I don’t know that the importance of [Catholic education] could be exaggerated,” Forjan told The Witness in January of 2005. “I think the values and the faith that are taught every day are invaluable…. The high school years are the most important and formative to help our young people make decisions when they’re on their own.”

James M. Forjan was born in Steelton, and was a graduate of St. Peter’s School there, and of Harrisburg Catholic High School in 1953. He attended Millersville State Teacher’s College and was a member of the U.S. Armed Forces.

Forjan and his wife, Patsy, raised three children: James, Mary and Anne, the latter of whom lived with a disability and preceded her parents in death.

Forjan arrived at York Catholic in September of 1959, beginning a legacy that would span two-thirds of the school’s existence.

“It was not just a job for him. He loved his work, and he loved the students and everything about the school.”

“Throughout his 59 years there, he interacted with students even if he didn’t coach or teach them personally,” Geubtner said. “He wanted to know how you were doing, how your family was doing. If you were in trouble, he would sit down and counsel you. It was apparent to everyone that he cared.”

Known as “Coach” in the York Catholic community, Forjan was respected and admired by multiple generations of faculty, students and families.

Mike Keesey, whom Forjan taught and coached in the early ’60s, gave an example of Forjan’s ability to remember students.

At a basketball game in Scranton, Keesey and Forjan were standing near the bleachers when a woman approached, and wondered if “Coach” remembered her.

“He looked at her a moment, said her name and told her he remembered that she played flute in the band. She had graduated 20 years earlier,” Keesey said.

“Those things were important to him. That’s just who he was,” he said.

Katie Seufert, current principal and a 1996 graduate of York Catholic, wrote in a letter to the school community that Forjan was “one of the greatest York Catholic mentors a principal could have.”

“For many of us blessed to have interacted with Coach, we would describe him as someone who commanded respect in a crowd, yet demonstrated humility in his individual actions,” Seufert reflected. “He had a way of making everyone feel valued and appreciated in his presence.”

George Andrews, who succeeded Forjan in 1998 and served as York Catholic’s principal until 2012, said his genuine concern for students developed enduring relationships.

“His legacy at the school is all the students he took care of, especially those who lost a family member,” he said. “Since his death, I’ve heard many former students talk about what he did for them when they had a death in their family. He took care of them at the worst time in their life, and he did it without fanfare.”

On the Court and in Life 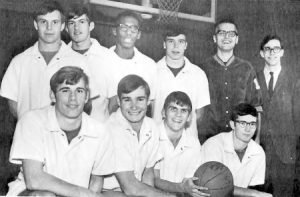 On the basketball court, Forjan promoted values that transcend the game.

“He taught us that the most important thing is effort. Do your best, every single day. Constantly strive to improve. Be prepared. Make sure to take care of the little details, because that means the difference between winning and losing,” Keesey said.

“He wanted us to be unselfish, to do what’s best for the team first. He coached us to limit our mistakes and learn from them. Those were valuable principles that served me not only in basketball, but in life,” he said.

Forjan stepped down as head coach to devote more time to helping his wife take care of their daughter with special needs.

But he didn’t step away from basketball, or from the players. He continued to attend games and advise coaches, including when Keesey took the helm.

“I spent a lot of time in his office when I was head coach. He scouted for us, and gave evaluations about what we did well and what we needed to work on,” Keesey said. “He would come to the locker room at halftime and talk to the players. During games, he would sit behind the bench and offer suggestions.”

“He was a huge help – and it was never unwanted,” Keesey said. “Even when he wasn’t the head coach, he was always coaching and teaching.”

Andrews said Forjan established what is known as “the York Catholic way” in basketball. “The school owes a lot of its basketball success to what he developed there,” he said. 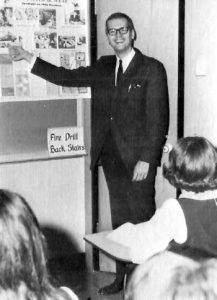 Jim Forjan, seen in his social studies classroom in 1967.

In recognition of Forjan’s dedication and influence, York Catholic established the James F. Forjan Endowment Fund in the early ’90s.

The initiative was developed by Bernard and Kathleen Beazley to acknowledge the education seven of their nine children received at York Catholic. Its purpose was to help supplement teachers’ salaries.

“Whatever money was raised by the school would be matched by the Beazley family, and the fund would benefit,” said Tom Beazley, one of Bernard and Kathleen’s nine children.

“He was always humbled by the attention,” said Beazley, who teaches at Lebanon Catholic School. “As I recall, he tried to divert attention from himself toward others, like my old man.”

When Forjan’s wife died, Beazley went to the funeral at St. Patrick Church in York. “Jim saw me and went out of his way to ask me to sit with the family, a request which I politely declined. There were plenty of other family who took precedence over me, but it was an act of graciousness that he didn’t have to do, and he did it anyway,” Beazley said.

“Jim’s mindset and his heart were always in the right place,” said Andrews. “He put the school, his family and others before himself.”

“We had a great working relationship, and we laughed every day,” he said. “In theory, I was his boss, but in reality he was my mentor.” Andrews became president of Mount St. Joseph High School in Baltimore in 2012, but his friendship with Forjan continued.

“He and Patsy lived a modest life and served as a model family for Catholic educators,” Andrews said.

The Forjan family expanded to include six grandchildren, another of Coach’s legacies.

In his later years, Forjan continued to be part of the fabric of York Catholic as a cafeteria monitor. He volunteered in that role until this past fall, when he became too ill to do so.

“We’d see each other as monitors, and we’d talk about life, the school and its Capital Campaign,” Geubtner said. “He wanted the best for the school in every possible way.”

Offering a testimony at York Catholic’s recent gala, Keesey summed up Forjan’s legacy: “Even though Coach is gone, his spirit lives on in every kid he ever coached, taught or inspired. We carry with us the knowledge, values and principles he instilled in us.”