Recently, I had the privilege of attending a Mass for which Bishop Gainer was the main celebrant. The liturgy marked the end of the retreat for the candidates in the diocese’s permanent diaconate program as they prepared for being called to lector.

During consecration during that Mass, I “heard” within my heart a woman’s voice gently humming a song that I did not know. I prayed, “Who are you?” I “heard” the response, “I am the Diocese of Harrisburg, the Queen whom you serve. Share my song!” 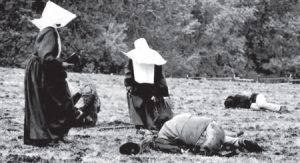 A reenactment photo of the Daughters of Charity tending to the fallen in the Battle of Gettysburg.

I thought of this story as I focused on our first American-born saint, Elizabeth Ann Seton, a true daughter of the Church.  A short story on her life can be found on YouTube1 and there are countless of books written about her life and the founding of the Daughters of Charity, whose motherhouse is located in Emmitsburg, Md.

The story of her entire life is beyond the scope of this article. However, upon doing some research about her, I was struck with the last instruction she gave to the Sisters gathered around her deathbed. She said, “Be children of the Church! Dear ones, pray for me when I am gone, for I shall want it. I thank God for having made me a child of His church: when you come to this hour you will know what it is to be a child of the church.”

One of her biographers describes her meaning of this phrase: “What did Elizabeth mean to tell us about being a child? … To what aspect of childhood is she calling us? … Rather, picture the child being held on its mother’s breast, or lovingly tossed into the air by its father. The little one sleeps, or laughs with joy. The parent is there; everything is safe; the world is secure. The child knows that all its needs will be taken care of. All it needs to do is look to the father, touch the mother. We are born trusting, we need to learn distrust and suspicion. To be a child of the church is to turn to God in trust and love, believing that his Body on earth, with all its imperfections and struggles, still brings God to us, and brings us to God. I believe Elizabeth’s faith was the foundation of her obedience and her unwavering commitment. Her faith was whole, she did not pick and choose what to believe and what to hold in abeyance. … But her faith was in a person, Jesus Christ.”2

This profound image was given as one of the lasting legacies from her to her Sisters. Years after St. Elizabeth Ann Seton’s death, the Daughters of Charity were asked to minister to the wounded in Gettysburg during the bloodiest three-day encounter of the Civil War. It was at this moment in time that her legacy touched our diocese.

Fourteen Sisters were assigned to the varied field hospitals within Gettysburg. One hospital was located in St. Francis Xavier Church. Because of the bright natural lighting, the vestibule of the church was the place of surgery and the sanctuary of the church was the recovery room. The centennial anniversary book of the Diocese of Harrisburg describes it in this way: “During the battle of Gettysburg this House of God became a hospital for wounded soldiers; within this hallowed walls brave men of North and South, foes on the field of battle, through weeks of pain were nursed with tender care by the Sisters of Emmitsburg. Contemporary accounts tell how the church was so filled with wounded that one could scarcely walk among them.” (pg. 38) It did not matter on which side the men fought, the Sisters cooked meals, changed bandages, buried the dead and wrote the last words of the dying to loved ones at home.

Their actions truly enfleshed what St. Elizabeth Ann Seton’s biographer describes: “If we are willing to listen actively, to pray consistently … and then to trust the Lord as we go forward with confidence (dare I say ‘Joy?’) to ‘meet our grace’ – we will be what Elizabeth Seton called us to be – ‘children of the church.’ To follow truthfully, today, calls for us to trust deeply in the God who calls, to believe that God’s will is revealed to us daily in the events of each moment, in the faces we meet, the sorrows we experience, one by one. The Church – the presence of Jesus – gives us the tools we need in order to serve, the strength to keep on, and the light that illumines our way.”

In other words, to live the song that is sung by the Church! Do you hear it?

By Sister Geralyn Schmidt, SCC, Special to The Witness