Keeler Was a Champion of Ecumenical and Interfaith Dialogue 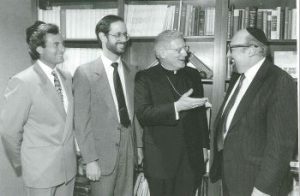 Cardinal William H. Keeler was a champion of interfaith and ecumenical understanding, regarded as one of the world’s leading figures in the field.

When Jewish conductor Maestro Gilbert Levine, the “pope’s conductor,” visited Baltimore in 2000 to conduct a special performance of Haydn’s “Creation” for an international interfaith musical pilgrimage, he asserted that Cardinal Keeler’s “very body is in the rhythm of interfaith.”

Cardinal Keeler was named a member of the Pontifical Council for Promoting Christian Unity in 1994. He also served as episcopal moderator of the United States Conference of Catholic Bishops’ Committee for Ecumenical and Interreligious Affairs from 1984 to 1987. While leading that group, Cardinal Keeler arranged for St. John Paul II to meet with Jewish leaders and Protestant representatives in South Carolina, and attend an interfaith ceremony in Los Angeles during the pope’s 1987 visit to the United States.

After Catholics and Lutherans agreed to a Joint Declaration on the Doctrine of Justification in 1999, Cardinal Keeler and Bishop George Paul Mocko, then bishop of the Delaware-Maryland Synod of the Evangelical Lutheran Church in America, nailed a copy of the document to the doors of the Baltimore Basilica and also Christ Lutheran Church in Fells Point.

“He knew how to listen,” said Rabbi Joel Zaiman, rabbi emeritus of Chizuk Amuno Congregation, Baltimore. “He heard. He understood, and he responded genuinely and generously. He was always available when I called – wherever he was – oftentimes, Rome.”

It was important to the Jewish community that the cardinal had the ear of the pope, Rabbi Zaiman said.

Rabbi Abie Ingber of Xavier University, Cincinnati, and Dr. William Madges, of St. Joseph’s University, Philadelphia, curators of a national exhibition highlighting St. John Paul II’s relationship with Jews, honored Cardinal Keeler in 2010 for his work promoting Catholic-Jewish understanding by presenting him with a bronze medallion. The cardinal had worked to promote the exhibit, which was featured at Baltimore’s Jewish Museum of Maryland.

Rabbi Ingber noted that one of the titles for the pope is “pontifex maximus,” which means “master bridge builder.” Recognizing Cardinal Keeler’s contributions as a bridge builder, the rabbi joked that if there was such a title as “pontifex almost maximus,” the cardinal should have it.

Bishop Kevin C. Rhoades of Fort Wayne-South Bend, former Bishop of the Diocese of Harrisburg, says ecumenism was one of the cardinal’s top priorities.

“He had many friends in the ecumenical movement and promoted good and strong relations with other Christians on the local level in the diocese. He was also very committed to a close relationship with the Jewish community,” Bishop Rhoades said. “He had a passion for ecumenism and good inter-faith relations. He was involved in many theological dialogues, but he also formed good friendships with our ecumenical and interreligious partners. His example showed that at the heart of these efforts was respect and love for one another.”

“Cardinal Keeler was truly a bridge-builder in all these activities. It was not always easy,” he continued. “I remember when I was rector of Mount St. Mary’s [Seminary in Emmitsburg, Md.] and we hosted the meeting of the International Catholic-Orthodox Dialogue. It was a difficult meeting and, I am sure, difficult for Cardinal Keeler, since there was not progress and quite a bit of tension at the meeting. This, however, did not deter him or prevent his ongoing efforts after the meeting.

“He was persevering because he believed so deeply in the importance of ecumenism and in Christ’s will that all his disciples be one. I think this priority of his was inspired by his experience at the Second Vatican Council,” Bishop Rhoades concluded.

(Matysek is assistant managing editor of the Catholic Review, the news website and magazine of the Archdiocese of Baltimore. Contributing to this article was Jen Reed of The Catholic Witness.)

By George P. Matysek, Jr., Special to The Witness