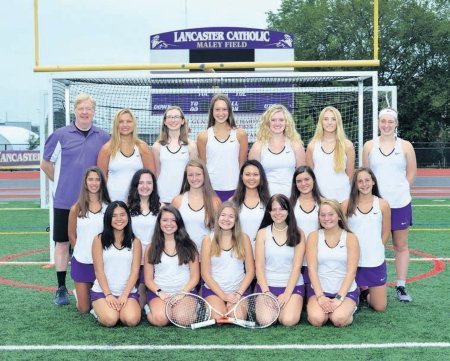 For the first time in the school’s illustrious sports history, the Crusaders of Lancaster Catholic girls’ tennis team swept all three competitions at the District 3 championships.

Success in Class 2A girls’ tennis usually means beating the Spartans of Wyomissing, who have won 15 of the last 21 District 3 team titles. So when the Spartans were upset by Hamburg in the semifinals at Hershey Racquet Club on Oct. 17, the Crusaders seized the day by easily dispatching Kennard–Dale in their semifinal and then denied Hamburg any chance at two stunning upsets. Lancaster Catholic soundly beat the Hawks, 3-0, behind the play of their number one singles’ player, Riley Smith, and number two, Anna Millen, who both lost only two games in their matches against Hamburg. The Crusaders move on to the PIAA state team tournament with a record of 16-2.

In the singles’ tournament played a week earlier in Hershey, Lancaster Catholic’s Riley Smith edged the tournament’s number one seed, Ava Lewis, of East Pennsboro to capture the Class 2A gold medal. In the finals’ first set, Smith won 7-6, capturing the set’s tense tiebreaker (7-3). Smith easily beat Lewis, 6-2, in the second set to win the gold medal. Lewis had won the Mid-Penn Conference title. Smith also cruised in her quest to win the Lancaster-Lebanon League championship in late September.

In the doubles’ District 3 championship on Oct. 19, the double’s team of Anna Millen and Angelle San Jose beat Wyomissing 6-4, 6-3 to capture the third gold medal of the week for the Crusaders.

The PIAA state tournament will be played at the Hershey Racquet club with the team tournament being played the last weekend of October and the singles’ and doubles’ championships held the first weekend in November, where the Crusaders will be a high seed in every bracket.

By Chris Heisey, The Catholic Witness