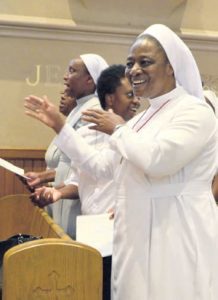 Missionary Sisters of the Most Precious Blood, from Shillington, Pa., lend their voices to the choir.

Ever since Father Deogratias Rwegasira’s arrival for ministry in the Diocese of Harrisburg five years ago, the Tanzanian-born priest has hoped and prayed for a regular Mass in Swahili for Catholics native to East Africa.

During his ten years of service in the Diocese of Allentown, Father Deo – a member of the Congregation of the Apostles of Jesus – celebrated such a Mass, and has wanted to bring one to Lancaster since being assigned as chaplain at Lancaster General Hospital.

On Sept. 22, Father Deo’s prayer was answered, as he celebrated the first of a monthly Mass in Swahili at St. Joseph Church. Swahili is considered a bridge language for the several hundred tribes of people in East Africa, and is the official language of Tanzania, Uganda, Kenya and the Democratic Republic of Congo.

More than 250 worshipers attended the Mass, which is thought to be the first-ever Mass in Swahili celebrated in the Diocese of Harrisburg. People came from Harrisburg, Allentown, New Jersey and Maryland for the celebration, which featured an adult choir from Norristown, Pa., and a new youth choir from Lancaster with whom Father Deo has been working for future celebrations of the liturgy.

“I have always prayed to have this ministry here,” Father Deo told The Catholic Witness. “The way the Holy Spirit works, members of the Order of Malta here in Lancaster were helping families who came here from East Africa, and they approached me to ask how we could bring these families together.” 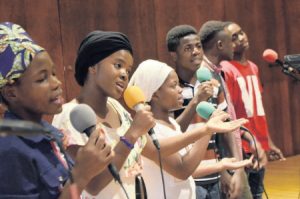 Members of a choir of East African youth from Lancaster provide entertainment at a reception after Mass.

“What you see is just the beginning,” Father Deo said of the attendance, the spirited Mass and the joyous gathering of food, music and dance that followed.

He was overjoyed to see couples in attendance for whom he celebrated the Sacrament of Marriage ten years ago, and during the reception after Mass, joined the youth choir in playing the bongos.

“We begin this Mass as a new ministry, to help bring these people back to the Church,” he said. “Many of them, when they came to the United States, went to other denominations that were having services in their language. But now, they are coming back to the Catholic faith, coming home.”

The Mass in Swahili will be celebrated on the second Sunday of the month at 4 p.m. at St. Joseph Church in Lancaster, beginning in November.