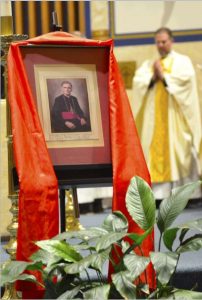 A portrait of Cardinal William H. Keeler is seen during a Mass celebrated in his memory at Assumption of the Blessed Virgin Mary Church in Lebanon March 28.

The parish in which Cardinal William Keeler was raised, educated and celebrated countless liturgies offered a memorial Mass for its native son on the evening of March 28, just a few hours after his Mass of Christian Burial in Baltimore.

Friends and classmates of the cardinal, who attended St. Mary’s School and graduated from Lebanon Catholic High School in 1948, were among those gathered at the Mass at Assumption of the Blessed Virgin Mary Church; a photo display in the narthex and his framed portrait – draped in red bunting – inducing memories and prayers from those in the congregation.

Father Michael Rothan, pastor of St. Mary’s, served as principal celebrant and homilist, and reflected on a common characteristic about Cardinal Keeler.

“He had this uncanny ability to remember people and places and details,” said Father Rothan, who, as an eighth-grader, was confirmed by Cardinal Keeler.

Years later, after his ordination to the priesthood, Father Rothan crossed paths with the cardinal and told him about receiving the sacrament from him.

“When I told him my name, he said, ‘St. Anthony’s in Lancaster,’” Father Rothan said of the Cardinal’s recollection of where he had confirmed the young priest.

“I believe he could do that because every time he met a person, it was an encounter,” Father Rothan reflected. “It wasn’t just to say hello on his way to do something else…. He would stop, take time and speak with you.”

In these encounters, Cardinal Keeler was doing the work of an evangelist, Father Rothan remarked.

“That’s the message for us today,” he said in his homily. “I have no doubt that, at the end of our life, when we join all those people in Heaven – we might not know where they came from or who they were – but [Cardinal Keeler] will know, he’ll remember. One by one, they will approach him, and embrace him, and he will come to understand the big and small ways that God used him to change the world.”

At the conclusion of the Mass, Deacon Richard Wentzel spoke of the cardinal as a humble and kind boy from Lebanon who heeded the Lord’s call and spread the Good News of the Church throughout the world. 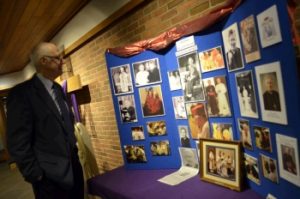 A display recalling the life of Cardinal William H. Keeler on display at Assumption of the Blessed Virgin Mary Church in Lebanon.

“I can’t help but think that the Sisters here gave him a great foundation for humility and also academic excellence,” said Deacon Wentzel, who was an elementary student at St. Mary’s while the cardinal was in high school.

They are also fellow Eagle Scouts. Cardinal Keeler, on his part, was also a Distinguished Eagle, and earned the Silver Beaver, Silver Antelope and Silver Buffalo awards for exceptional character in providing distinguished service at the local, regional and national levels, respectively.

“One of the things I’ve often observed with my own peers, people I’ve known, even St. John Paul II, is that at the end of their life, it seems that the very gift they have, God takes from them for a time,” Deacon Wentzel reflected.

“The cardinal had a silent period at the end of his life. Still, it was always great to just be in his presence, and now we pray that he is in God’s presence,” Deacon Wentzel said. “Rest in peace, Cardinal Keeler, or, as we used to say in Scouting after the end of a meeting, ‘Farewell until we meet again.’”