Our Father, Who art in heaven, hallowed be Thy name.

How many times have you prayed the words? Innumerable. But with all your heart, all your mind and all your soul, have you truly entered into them?

A new app makes that possible. Named “Hallow,” it offers guided meditation sessions over the course of five 10 or 15 minutes that lead users through prayer, calmly and carefully, step-by-step.

“We wanted to go out and teach the world how to pray,” said Alessandro DiSanto, a 2012 Bishop McDevitt High School graduate and one of the app’s founding members.

The app takes users through a nine-day introductory series, which acquaints first-timers with the practice of sitting in silence with God.

Users can pick from a male or female narration, as well as silence, Gregorian chant or ambient sounds as background music, to “gradually turn [their] attention to God,” as the narrator says in each session.

But it’s not just for beginners. Hallow has proven to be a resource for those already in the practice of prayer.

It livens up any prayer routine, like “having a friend praying with you,” as one local user said.

Since its launch in December of 2018, it’s caught on – with almost 15,000 downloads and a nearly perfect rating on the Apple App Store.

A couple of years ago, DiSanto could not have imagined himself as a founding member of a start-up tech company.

He spent years studying and working in finance, first for an investment bank on Wall Street, then for a private equity firm in Chicago. But through all the excitement of landing his dream job, he felt a loss of peace.

“I was struggling to maintain a good balance between work life and family life, with personal relationships and faith life,” he said. Four friends he had met while studying at the University of Notre Dame felt similarly.

“We decided to try some things,” said DiSanto, who now is the head of finance and strategic partnerships for Hallow.

They sampled some popular meditation apps, like Headspace and Calm, to de-stress for a few minutes during a demanding work week. 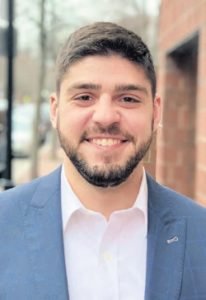 Alessandro DiSanto, a 2012
graduate of Bishop McDevitt High School in Harrisburg, is a founding member of the Hallow app, a new resource for Catholic prayer.

“We thought it was helpful, but it was more inwardly focused. We thought it should be a religious experience, not just the end in and of itself,” said DiSanto, who resides in Chicago.

Headspace and Calm use traditional Buddhist visualization techniques and breathing exercises in their secular, mass-market meditations.

Alex Jones, Hallow’s CEO and co-founder, wondered if the Catholic Church had “this meditation stuff,” DiSanto said. “Very ignorantly, he asked, ‘Does it exist?’”

They did some digging, and found traditions like the examen, a reflective prayer popularized by the Jesuits that helps to visualize and improve one’s day; Lectio Divina, a prayerful, close reading of scripture with visualization; Taizé, a form of chant meditation, and tried-and-true classics like the Rosary and the Stations of the Cross.

DiSanto and his friends implemented the practices in their own lives just to see what would happen.

“It turns out it was amazing. They’re beautiful, and really were life changing to us personally,” DiSanto said.

They went for it. Jones designed the first version of the app over the next six months, and after a successful testing period, it officially launched to the public in December, accessible for iOS and Android. It features a free version and additional content for subscribers at a rate of $8.99 a month, or $59.99 a year.

But before DiSanto could fully commit to his new pursuit, he had to discern if stepping out of finance was right for him.

One day last fall, DiSanto found himself emotionally and physically exhausted after a jam-packed work week with a 21-hour finale shift on a Friday. He worked late so he could take a trip to the Chicago suburbs to meet with the Hallow team for a prayer retreat.

“We started off the morning with 45 minutes of group prayer, which I have done probably never on a Saturday morning, just a group of friends getting together to pray,” DiSanto said. “In that moment, it was almost out of a movie: it was complete peace, complete calm. And in that moment I knew: whatever that was, I needed more of that, and I needed to help other people find that in their lives too.”

Not long after, he resigned from his dream job.

“And we all have similar versions of that story. We would not be anywhere we are today without the Holy Spirit,” DiSanto said.

Hallow is structured in three categories: challenges, “praylists” and dailies.

Dailies – accessible in the app’s free version – include meditation, using Lectio Divina on the Gospel passage of the day, the Rosary, examen, and spiritual writing, where writing prompts direct the user to write a reflection in a journal.

“I love new meditations for the Rosary. I’ve been trying to do a daily Rosary, so Hallow has really helped me,” said Ann Deegan, a parishioner at the Cathedral Parish of St. Patrick in Harrisburg. “Once you start, it doesn’t allow me to get distracted as much during the Rosary.”

Praylists are prayers molded into a series based on topics like joy, humility, love, finding calm, hope, gratitude and making decisions. Most are broken into approximately nine sessions, so users can pray over the course of nine days – a modern twist on the traditional novena.

Andrea Mahoney from St. Elizabeth Ann Seton Parish in Mechanicsburg recently prayed through the Letting Go Praylist, medidating on the passage where Jesus tells His disciples to deny themselves and pick up their cross to follow Him.

“The word ‘deny’ stuck out to me in particular because I felt as though the Lord was asking me to deny my own plans for my life and desires completely, and lay them at the foot of His cross. It was a beautiful invitation to recommit myself to Him,” she said.

Challenges use Lectio Divina to guide users to meditate on a certain passage of scripture, like the Passion narrative, broken into the Stations of the Cross, or the Our Father.

Some users praise the app’s accessibility and mobility.

“I can pray everywhere! I was praying in the sauna. I took my phone with me and sat in the sauna and did the Rosary. You can take it anywhere, pray anywhere!” said Tanya Dayton, who also attends Holy Name of Jesus Parish.

Dayton didn’t expect to like it because she is trying to limit her use of technology.

“But I really like it – it’s so easy to follow. It’s not overwhelming, it’s very simple,” she said.

The Hallow team expected its target audience to center around young professional women. But the team found that the actual population of users are more widely diverse.

Avid app users tend to be around a life event or change in lifestyle, like high school or college students, young professionals who have recently entered the work force, recently married people, new parents, and empty-nesters, DiSanto said.

And it’s an evangelization tool, too, as prayer can be perceived as separate from one’s pre-held notion of “church,” DiSanto explained, reaching people who may have been away from the Church.

“Prayer sidesteps all the massive issues. This is just you and God,” DiSanto said.

By Mariah Chuprinski, Special to The Witness