Parishes Offer ‘Surviving Divorce’ Program for a Path toward Healing 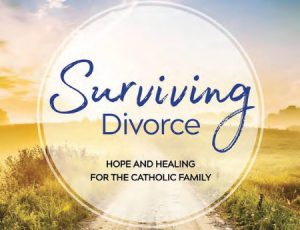 A year ago, Pat Smith was in turmoil.

Her marriage of 40-plus years had just ended in divorce.

“I was totally devastated. I felt ashamed. I left like I was a failure,” she said.

She was unsure of where to turn – or whether she should even open up about her new reality and her emotions.

People who are divorced can experience a strange dichotomy, Smith explained: “On one hand, you think, ‘Keep it to yourself. No one needs to know.’ But then, ‘I need someone I can talk to about this.’”

A cradle Catholic and a member of St. John the Baptist Parish in New Freedom, Smith found counsel in her pastor, but longed to connect with people who were experiencing the fear, questions and grief that come with divorce.

Knowing that her parish routinely offers programs distributed by Ascension Press, Smith searched the platform’s materials, and found the Surviving Divorce program. The 12-week series is designed to offer resources that bring hope and healing to those who are divorced or separated.

Soon, Smith connected with fellow parishioner Deb Cousin, and the two received permission from their pastor, Father Robert Yohe, to bring the program to St. John’s.

The women are now co-facilitators of Surviving Divorce, which will begin its third 12-week run at the parish later this month.

Fresh from her divorce when the series started there last fall, Smith assisted with the program behind the scenes while attending as a participant.

“When we put announcements out about this last year, we quickly realized the need for it was real,” she said. “We got calls from people in Harrisburg, Duncannon. Two people drove 45 minutes or more than an hour to come the first time.”

Examining the Emotional and the Spiritual

Surviving Divorce is one of the faith-based programs that several parishes in the Diocese of Harrisburg offer in ministry to divorced Catholics. It was written and co-produced by Rose Sweet, a Catholic author, speaker and expert on pastoral issues of divorce.

“The program covers the practical, the emotional and the spiritual, and pulls all three together. That’s what makes the ministry successful,” said Cousin. “By the end of the program, participants are starting to grasp where they’re at and what they’re dealing with, without their emotions being the controlling factor.”

The program features video testimonies from a psychologist and priests, as well as Catholics who have experienced divorce. Topics examine grief, anger, forgiveness, money issues, children, custody, the sacraments, annulments and remarriage.

“The program offers you a path for healing, while being with others who are going through what you’re experiencing,” said Cousin, who divorced in 1984, and whose current marriage was convalidated when she joined the Church several years ago. “You start to see how the Holy Spirit is working in your life.”

Sweet said she co-produced the program to be designed as a healing ministry.

“Divorce cuts deep. Marriage is the very core of our families and of who we are as people. We come from families, we want to belong to families, and divorce is an attack on that,” she said. “It’s also an attack on the most personal part of the person – your love, your sexuality, your identity.”

She uses a medical analogy to get to the heart of the program for divorced Catholics.

“If you were feeling pain and went to a doctor who gave you some medicine, sure, you would feel better. But a good doctor says, ‘Let’s also take an X-ray, let’s take a blood test and look inside.’ That’s what a faith-based program does,” she said. “For true healing, we’ve got to go deeper.”

“This program draws people in on their emotions and how to handle what they’re dealing with, but ultimately it’s about evangelization and personal conversion to Jesus,” she noted.

A Path toward Healing

“There is still today a lot of stigma that comes with being divorced in the Catholic Church, and that’s also why this ministry is important,” said Cousin. “People do feel shame or discomfort in saying, ‘I’m Catholic, and I’m divorced.’ This ministry shows them that the Church knows they’re hurting, and it wants to provide healing.”

“Let’s say, for example, I was married to an abusive husband. I’m glad he’s gone now, but I still feel shame because I picked him, or I failed, or I could have done better,” she said. “But if I don’t address that, I’m going to carry it for the rest of my life,” she said.

Fear is also a factor. “There is fear of hard work, fear of letting go of certain things. Only when you get to a place of enough pain are you ready to find help,” she said.

“Our program does not promote divorce and annulments. We promote the Truth,” Sweet said.

“All of our materials encourage people to come and find healing. If you got divorced yesterday or 20 years ago, there is always something in this program for you,” she said. “If we will give him ourselves, God will bring great good out of our divorces.”

(See the accompanying box for a list of divorce ministry programs offered by parishes. For more information on Surviving Divorce, visit www.catholicsdivorce.com. To learn about the Diocesan Annual Campaign, visit www.hbgdiocese.org/DAC.)

The Diocesan Office of Family and Respect Life Ministries provides this list of parish-based divorce programs. Contact the parish facilitator or coordinator for more information.