Basilica of the Sacred Heart of Jesus – Hanover

Basilica of the Sacred Heart of Jesus

Conewago is the Mother Church of Pennsylvania west of the Susquehanna.  The eminent York Historian, Anna Dill Gamble (1877-1956), said that there is reason to believe that English Jesuits established a mission post in the Conewago region as early as 1637.  Father Joseph Greaton, SJ, the first priest whose name we know, attended the early Catholic settlers there.  He arrived in Maryland in 1719 and was assigned to the mission territory of Northern Maryland and Southern Pennsylvania. 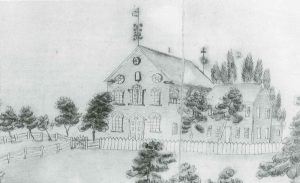 Conewago Chapel was founded in 1730 (per Papal Bull of Saint John XXIII); by 1741 a combination log dwelling and chapel built had been built known as Saint Mary of the Assumption. By 1784 the Conewago congregation had grown to over a thousand members, the largest Catholic parish in early America.  With the active help of parishioners, a new church, the largest Catholic church structure within the new nation, was started in 1785 and completed in 1787.  It became the first church in America dedicated to the Sacred Heart of Jesus and probably the first parish church in the Western Hemisphere bearing this title.  Today, it is the oldest Catholic church building in the United States built of stone.

The Russian prince, Demetrius Gallitzin, spent his early years in the priesthood at Conewago.  In 1799 he set out to evangelize west of the Susquehanna and founded the Catholic settlement of Loretto, Pennsylvania, where he became known as “the Apostle of the Alleghenies.”

In 1834, the Sisters of Charity came from Emmitsburg, MD to open the Conewago Chapel School. 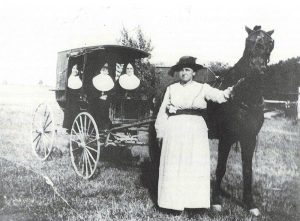 In 1851 the church was enlarged with the addition of the transept and apse and was consecrated by Bishop Francis Kenrick of Philadelphia on August 15, 1851.  In 1873 the steeple was added.

The JESUIT Fathers had charge of Conewago from its beginnings until June 3, 1901, when they withdrew and Bishop John W. Shanahan appointed the first pastor from among the priests of the diocese.

In 1902 a new school was built.  For years the Sisters of Saint Joseph had been coming from McSherrystown each day to teach at the Chapel School and at the Irishtown and Mount Rock Schools.  In 1932 the outlying schools were closed and parochial education was centered in the renovated school at Conewago.  At about the same time a convent was provided for the teaching sisters.

Bishop George L. Leech in 1937 on the occasion of the sesquicentennial of the building of the present church declared, “Conewago belongs to America, not merely to a parish or a diocese because it was the gateway through which passed the saintly founders and zealous missionaries who carried the light of the true faith eastward and westward into the frontiers of our land, long generations before the founding of our beloved nation.” 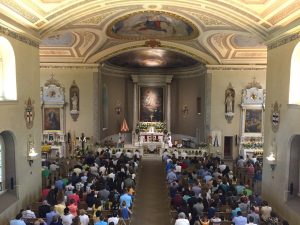 On July 11, 1962 Pope John XXIII, now Saint John XXIII, raised this church to the honor and dignity of a Minor Basilica had these words to say of the ancient shrine in a document issued on June 30, 1962: “Blessed in the sight of heaven is the place called Conewago, famous, above all else, as the seat of the first church in the United States, and perhaps in all North America, dedicated to the sacred Heart of Jesus, and as a cradle of fervent Catholic Life. . .this church is counted among the fairest of the land.  The faithful of America are drawn to this shrine of religion to share in the sacred rites and to “drink deep from the foundation of salvation.’” (Isaiah 12, 3).

The church’s Sesquicentennial in 1937 and the elevation of church to the rank of a Minor Basilica in 1962, celebrate the antiquity, the magnificence and the importance of Conewago to the Church and to the nation.

The parish celebrated the Bicentennial of the church’s construction in 1987.  Apostolic Pro-Nunico Pio Laghi celebrated Mass followed by a formal dinner in the parish hall.

In 2000, the new parish social hall (with kitchen and gymnasium space) was dedicated.  The former hall was converted into classroom space.