Between 1840 and 1860 there was a great influx of immigrants from Germany to the Columbia area due to the disturbed conditions in Europe following the Napoleonic Wars.  Those who practiced the Catholic faith attended Saint Peter’s Church, but the need of a German-speaking parish was soon apparent.  Bishop John Neumann suggested that the Catholics of German background might find it advisable to erect a church for themselves. 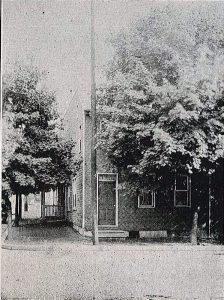 Home at 3rd & Perry Streets where first Mass was celebrated.

Planning began in 1856 with liturgies held in Saint Peter’s basement and in private homes until 1860, when the Holy Trinity parish was formally established and the cornerstone of a new structure laid.

On October 3, 1859, following a visit by Bishop Neumann, property for the erection of a church was purchased and parishioners began work on the foundation.  Bishop James F. Wood laid the cornerstone in the summer of 1860 and the brick church was completed in 1862. 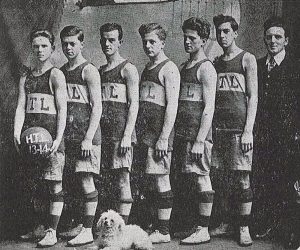 In 1865 three acres of land was purchased for a cemetery and in 1866 a two-story brick rectory was erected.  A parish school opened in the church basement on September 1, 1865 with one lay teacher and sixty children.  A new school opened in the spring of 1870 and was dedicated November 1, 1870.  More than 40 years later a new school and auditorium were built and the buildings were dedicated on October 24, 1915.

The parish burgeoned and by 1924 there was the need for a bigger church so a new home was purchased for the convent, and the old school and convent were razed.  In the summer of 1926, the old church was demolished and construction begun on the magnificent new church.  Services were held in the school auditorium until the church was completed.  Bishop Philip R. McDevitt dedicated the church on October 6, 1929.  This church is still in use today.

By the late 1950’s the parish property was enlarged and an extensive renovation was made to the rectory and cemetery.