When the railroad was under construction at Columbia, an Indian burial ground was uncovered and in it were found Catholic religious article, relics of the Jesuit missionary work in the Susquehanna in the 17th century. 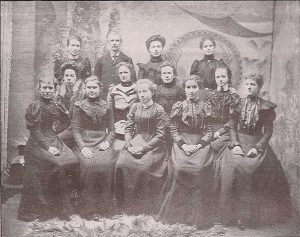 However, prior to 1828 Catholics residing in Columbia had to travel to Lancaster, York or Elizabethtown to attend to their religious duties.  Catholics were very few in number, perhaps a dozen families.  These journeys to Lancaster were in many cases on foot, and a ten or twelve mile walk on Sunday Morning before Mass, with a return journey in the afternoon, was not unusual.  Hence in 1827, it was thought that there was a growing need for a church in Columbia.

An initial lot, bought in 1826, was thought too far from the center of the borough and another site was purchased in March 1828, and Bishop Francis P. Kenrick laid the cornerstone and dedicated the church on September 12.  The original plot was used as a cemetery until 1879.

Founded in 1829 to minister to dozens of Catholic families, Saint Peter Church grew so fast that its original church structure had to be expanded by 1850.  Rapid growth occurred into the 1880s, and parishioners w 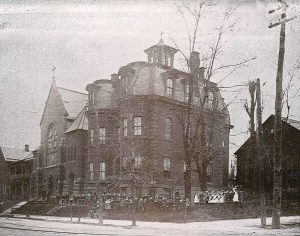 ere soon envisioning another expansion.  More than 3,000 visitors came to celebrate the laying of the cornerstone of a new church in 1895.

Catholic activity in Wrightsville area began in 1871 when land was purchased for a school and cemetery.  The school opened in 1874 in a log house but closed its doors several years later.  The chapel at Our Mother of Holy Purity was constructed in 1903 and is administered from Saint Peter Parish, Columbia.