Parishioners in Marysville and Duncannon Delight in Special Relationship 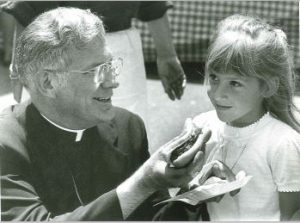 For Michael Ciccocioppo, whose family members were parishioners at Our Lady of Good Counsel Parish in Marysville during then-Father William Keeler’s days there, the definition of the late cardinal’s sincerity is woven into a story of women’s silk stockings and Italian cheeses.

Mr. Ciccocioppo’s family were founding members of the Marysville parish, and when Father Keeler was assigned there as assistant pastor in 1956, the Ciccocioppos quickly formed a relationship with him.

The priest was especially attentive to the elder of the Italian family, Annine, Michael’s grandmother, and would frequently look in on her.

When Father Keeler was appointed to serve as Secretary to Bishop George Leech during the Second Vatican Council, he made a visit to Annine before leaving for Rome, and a tradition started.

The woman presented Father Keeler with pairs of women’s silk stockings, and asked if he would deliver them to her sisters who lived in Lanciano, a few hours away from Rome. Father Keeler obliged and, upon personally presenting the stockings to their happy recipients, the sisters reciprocated the priest with Italian cheeses to take back to their sister in Marysville.

The stockings and cheese trades occurred each time Father Keeler traveled to Rome for the Council, according to Mr. Ciccocioppo. Prior to Father Keeler’s final trip, Annine asked him, “What’s gonna happen if your airplane crashes and you die, and they find your suitcase with women’s silk stockings inside?”

“My grandmother’s requests and the trading of items never bothered him, despite the effort of visiting the ladies, and making a few hours’ trip to Lanciano,” Mr. Ciccocioppo said. “He was happy to do her that favor. That’s the kind of guy he was.”

A resounding theme heard during memories shared of the late cardinal is that he remembered people, and was sincere in engaging them.

Mr. Ciccocioppo, in his various roles in working for the Church and in the pro-life movement, crossed paths with Cardinal Keeler on a number of occasions, and each time, even after years had passed, the cardinal would ask, “Michael, how is your family? It’s good to see you!”

“It didn’t matter your state in life – whether you were rich or poor, a stately person or a person in the pew – he treated everyone with equal respect. He was a personification of Christ,” Mr. Ciccocioppo said.

Linda Auxt was just a little girl when Father Keeler was serving in Marysville, but her childhood experiences with the assistant pastor (Father Keeler served with pastor Father Martin Lohmuller – later Auxiliary Bishop of Philadelphia who died earlier this year) flourished into great love and respect over the course of her life.

“I remember him as being very real, very personable,” said Ms. Auxt, a member of St. Bernadette’s in Duncannon, a mission of Our Lady of Good Counsel.

As a child, she was bussed from Duncannon to Marysville for CCD classes in Our Lady of Good Counsel’s parish hall. Father Keeler was the bus driver.

“You know how kids on a bus can misbehave,” Ms. Auxt hinted.

To keep the boys and girls focused and settled in their seats, Father Keeler taught them a song – a familiar countdown lyric frequent to road trips.

“Years later when he came back to our parish as Bishop of Harrisburg, I talked to him about it, and he remembered it, and laughed about the memory,” Ms. Auxt said. “He was an important part of our lives, and the awesome thing was that he never forgot us.”

“Even when he left Marysville to work at the diocese, and even after he left Harrisburg for Baltimore, he never forgot the parish and its people. He would remember who you were, how he knew you, who your family was, how many kids you had,” Mr. Boyer remarked.

When Mr. Boyer’s mother, Julie, was on her deathbed in 2005, he phoned current pastor, Father John Trigilio, who was at a conference in Maryland at the time, and asked if there was any way to connect to Cardinal Keeler, as Mrs. Boyer had shared a good friendship with him.

Sure enough, the phone in Mrs. Boyer’s room at the hospital soon rang, and the cardinal was on the other end.

“Here was the cardinal, who remembered my mother from the 1950s, giving her some peace before she died. It was truly genuine on his part,” Mr. Boyer said.

“It’s remarkable to think of how fortunate our parishes of Marysville and Duncannon are,” he said. “Father Lohmuller and Father Keeler served here together, they both became bishops, and then Bishop Keeler became a cardinal. To think that both of them came from our little parishes, and even after they left, they never forgot us.”