‘Patrons of Our Seminarians’ Program Will Benefit Men Studying for Priesthood 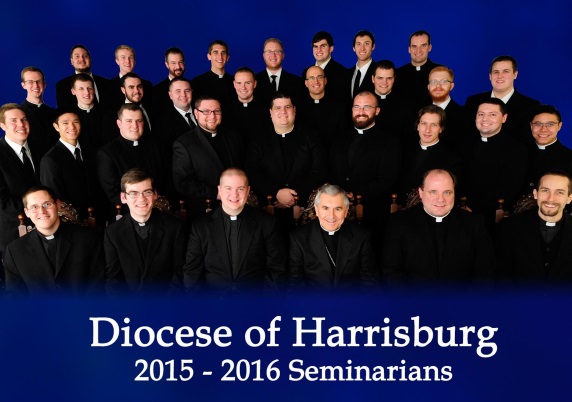 The Diocese of Harrisburg has begun a new initiative that will directly sponsor its men who are in priestly formation.

The Patrons of Our Seminarians program invites individuals and families to invest in a commitment to the education of those studying for the priesthood, so that, God willing, they become holy men for the diocese.

The selection of the word “Patrons” as part of this ongoing program is two-fold, explains Father Brian Wayne, Director of Vocations for the Diocese of Harrisburg.

“First, as Catholics, we all have patron saints, friends in Heaven we ask to look out for us and pray for us. We all need the support of others to persevere in our God-given vocation,” he said. “Second, ‘patron’ is from the Latin word for ‘father’ and ‘parent.’ I want the faithful to think of our seminarians as their sons, and that we are a family in Christ who wants to support one another.”

Good Priests Do Not Just Happen

The diocese is blessed by the number of men who have responded to God’s call to a religious vocation. Currently, 33 seminarians are

discerning the priesthood for the diocese, a number that has tripled in the past decade.

But, good priests do not just happen. Before a man can be ordained to the priesthood, he must complete eight to ten years of higher education: first building a foundation in philosophical studies before engaging in master’s level work in theological studies.

Today, in the diocese, there are 12 seminarians who are in collegiate studies, and 21 who are in theological studies. God willing, three transitional deacons will be ordained priests in the spring of 2017.

Outside of the seminary classroom, a seminarian will also spend three to five years of summer pastoral work in parishes; attend a spirituality summer program; engage in a Spanish immersion experience; participate in seminars on preaching, administration and leadership; and lead his own discernment retreat.

This year, one year of tuition, room and board for one seminarian is $37,000. Add the cost of special immersion programs and retreats, and the figure totals $42,000. This year, for the 21 seminarians currently in theology, the diocese is responsible for $882,000 for their education and formation.

“We owe it to the men, those who are willing to discern whether they are called to sacrifice their lives for us, to sacrifice some of our own treasure for them,” Father Wayne said.

The blessing of 33 seminarians for our diocese comes with a challenge, and a responsibility.

“Becoming a Patron is truly investing in our future priests and the mission of the Church in Harrisburg for years to come,” said Father Wayne. “As a young priest, I cherish the times I visit the faithful in hospitals, nursing homes, or bound to their home. I am in a long line of priests who have nourished their souls. We need to continue that line of priests that, generation after generation, will have the same access to the sacraments for their own spiritual well-being.”

In becoming a member of the Patrons of Our Seminarians program, you will directly sponsor the men in priestly formation for our diocese, making an investment in your future priests.

To enroll in this program and offer your ongoing investment to our seminarians, contact the Office of

Vocations via e-mail at www.vocations@hbgdiocese.org or by phone at 717-657-4804, ext. 282. Information is also available at www.hbgdiocese.org/patrons.

“By investing in our seminarians’ education and formation, you are truly investing in the mission of Jesus Christ and His Church here in the Diocese of Harrisburg,” said Bishop Ronald Gainer. “Know that your sacrifice goes towards educating them in the Truth, helping them follow the Way to holiness, that they might one day lead all of us in the life of grace.”