“I couldn’t get over what I had done. I was so broken. I begged God for forgiveness for what seemed like a million times, but never knew how to forgive myself.”

Becky Biter was in the throes of post-abortion traumatic stress, suffering from two abortions she’d had as a teenager. She knew what she had done. In the years that followed, she cried constantly, struggled to function as a stay-at-home mom, lost hope for her future, and contemplated suicide.

She didn’t know where to turn.

“For 20 years, [my husband and I] sat in the pew and never heard the word ‘abortion’ being spoken about, and so it wasn’t something we thought our pastor could help us with,” she said. “We spent most of our marriage hiding behind masks.”

But ten years ago, Biter found healing through a retreat that is part of a multi-faceted approach the Diocese of Harrisburg is undertaking to give compassion and hope to those struggling with the grief of abortion.

Project Rachel is the U.S. Catholic Church’s ministry to those who have been involved in abortion. It provides an integrated network of ministries and services – including the Sacrament of Reconciliation, pastoral counseling, support groups, retreats and referrals to licensed mental health professionals – tailored to each woman’s needs.

“Post-abortion traumatic stress is very real, and very devastating,” Biter said at a recent pro-life event at St. Patrick Parish in York. “Based on statistics, one in four women will become a victim of abortion by the age of 45.”

“In a church with 1,200 families, based on statistics, some 300 women will be impacted by abortion. When we factor in the often-forgotten fathers, our number doubles: 600 people impacted by a decision they never will be able to reverse,” she remarked. “It’s not just the babies’ lives that are at stake – it’s the life of the mother, the father, the whole family.”

“We cannot be afraid to talk about abortion,” Biter stressed. “Women and men need to hear that they are not alone in their suffering. They need to know where they can find hope, to heal their broken hearts. They need to know about post-abortion healing ministries.”

Jesus’ message of mercy, “Neither do I condemn you,” is given through Project Rachel.

Project Rachel is a diocesan-based network. Specially trained priests, religious, counselors and laypersons offer a team response of care for those suffering in the aftermath of abortion.

The ministry is available to anyone – regardless of their faith – who was involved in an abortion: the woman, her boyfriend or husband, her parents or grandparents, and siblings grieving the loss of their aborted brother or sister.

It is currently being introduced in the Diocese of Harrisburg through the Diocesan Office of Family and Respect Life Ministries.

Tom O’Neill, Director of the Office, attended a conference for Respect Life Directors offered by the USCCB last year and felt called to introduce Project Rachel here, commending the many pro-life resources in central Pennsylvania – including parish pro-life ministries, pregnancy resource centers and pro-life witnesses outside of abortion facilities.

“I felt the Holy Spirit was calling us to do more in one area – post-abortion ministry,” he said.  We have hosted a strong, vibrant Rachel’s Vineyard retreat program for many years. However, post-abortion ministry also needs a high profile to reach as many people as possible, the type of profile the Diocese can provide.”

In the Diocese of Harrisburg, the Project Rachel network includes 10 therapists and 25 priests specifically oriented to the ministry.

During their annual workshop Oct. 13-18, Diocesan priests were introduced to the ministry’s launch in the Diocese of Harrisburg.

“By training priests and therapists to address trauma and grief as well as guilt, and by giving post-abortive women and men an anonymous, compassionate and non-judgmental way to ask for help, Project Rachel Ministry extends Jesus’s mission of love and forgiveness to those who need it most,” O’Neill said.

Those seeking hope and healing can connect to the ministry in a number of ways: by contacting the helpline directly, by speaking with a priest in pastoral counseling or in the confessional, or by talking to a therapist.

“It is very difficult for a woman or a man to reach out in seeking help for post-abortion counseling. Many times, it’s ten years or more after the abortion experience before someone will step forward to find help or call or make inquiries,” said Linda Plummer, Executive Director of Morning Star Pregnancy Services.

Plummer ministered with Project Rachel in the Diocese of Raleigh and has more than 20 years of experience working with post-abortive women and men.

Meeting them where they are, and listening to their stories is critical, she said.

“Sometimes a first step for them is, ‘I just want to talk to somebody that has some knowledge of what the healing process looks like.’ Sometimes a woman or man may very quickly identify, ‘I want to talk to a priest,’ or, they may need to talk with a therapist first,” she said.

“What they need to hear when they do pick up the phone is, ‘There is help for you,” Plummer said.

Avenues for healing and forgiveness include the Sacrament of Reconciliation, pastoral counseling, professional counseling, support groups and the Rachel’s Vineyard Retreat.

Regardless of the particular program that sets them on their journey, “Project Rachel means that there is a confidential, designated helpline where women can be confident that the person on the other end of the line is going to listen, understand where they’re coming from and have a compassionate response that directs her to healing opportunities,” said Mary McClusky, Assistant Director of Project Rachel Ministry Development for the United States Conference of Catholic Bishops’ Secretariat of Pro-Life Activities

“Whenever we talk about abortion, we must always include the message that healing and forgiveness are possible: ‘Yes, abortion is a sin, and we recognize the loss of your child and we want to help you receive forgiveness and heal,’” she said.

A Sea of Mercy 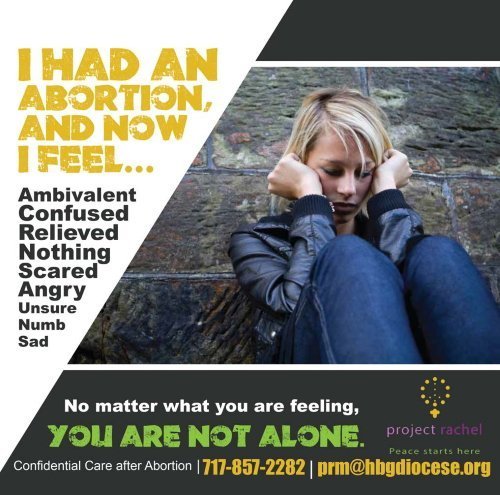 Nine years ago, and more than two decades since her abortions, Becky Biter was plagued by thoughts of suicide.

“I planned to slam my truck into a tree, because I thought that was the only way out of my misery,” she said.

Fortunately, she found help through a Rachel’s Vineyard Retreat.

“The Holy Spirit led us to Rachel’s Vineyard, and at our retreat, he bestowed on us the grace of undefeated courage. I begged him to drown me in the sea of his mercy, and he embraced my soul and pulled me from the pit,” she said.

A Rachel’s Vineyard Retreat weekend provides an opportunity for women to examine their abortion experience, identify the ways that the loss has impacted them, and acknowledge any unresolved feelings.

Father Dwight Schlaline, pastor of Our Lady of the Visitation Parish in Shippensburg, ministers at the confidential retreat weekends, which are offered regularly in the Diocese.

“It is a retreat experience in which people who have experienced abortion are able to walk through the grief process, or at least start it,” he said.

Father Schlaline is passionate about the ministry.

“I’ve really learned what a woman with post-abortion syndrome is going through. Most people don’t know what that is, because it’s politically incorrect to look at abortion as such a horrific thing. [Society tells us] it’s supposed to be a ‘useful’ thing, but it is very destructive, especially for a woman,” he said.

A Rachel’s Vineyard Retreat is one way to begin the healing process, Father Schlaline said.

“There’s a strong sense with the women who go on the retreat that everything bad that happens to them after the abortion is a punishment from God. We have to work with that pastorally,” he said.

The weekend allows participants to experience Jesus’ mercy and healing in a real way, confidentially among others who are struggling.

Healing and forgiveness are found in the Sacrament of Reconciliation.

“A woman has to have a lot of courage to confess, but once they do, there’s a kind of release, a lifting of the burden off of the shoulders,” Father Schlaline said.

“We cannot be dismissive, or tell a woman that it’s not a big deal. The worst thing you can do is say that someone’s abortion didn’t mean anything. That’s what everyone else is doing, but that’s where the Church is distinct,” he remarked. “We receive their grief in the sacrament and we give them God’s forgiveness,” he said.

McClusky said Project Rachel is a ministry of the Church because it continues Jesus’ healing ministry.

“The Lord offers his mercy and forgiveness any time Confession is available and won’t refuse a repentant heart. We the Church are here to proclaim and offer the gift of Christ’s mercy,” she said.

An Open Door to Compassion and Healing

“I have never seen such transformational healing take place as I have witnessed in this ministry,” Plummer said of her experience in post-abortion counseling.

“What I see is women and men coming from such pain and suffering, shame and guilt with this secret burden, to walking away saying, ‘I feel light.’ ‘I feel peace.’ ‘God has forgiven me.’ ‘My children have forgiven me.’ ‘My relationships with other people can be different now,’” she said.

Based on inconsistent and varied reporting requirements and information from research centers and institutes, a likely estimate is that nearly one in three women in the United States will have had an abortion by age 45. For those involved in Project Rachel, the message of mercy is crucial to helping a woman heal from the emotional and psychological scars.

“Approach it from a perspective that there are probably people in my family, friends, people sitting next to me in the pew that have had this experience,” Plummer advised. “Whenever we are talking about a pro-life message, we always have to mention that we have this ministry of the Church, and there is an open door to healing…. The message we need to make sure everybody hears is that there are people who can help you.”

McClusky said the Church’s teaching on the value of human life also extends to its compassion for those who have had an abortion.

“Since we greatly treasure the incomparable gift of life, naturally it follows that we also appreciate a woman’s loss. Consider that since we so greatly treasure both the life of the mother and her child, naturally we are going to be appreciative of what it means when a woman has been convinced by the lie that abortion will empower or free her,” McClusky said.

The Church’s response to a woman seeking healing and forgiveness from an abortion can be the difference between her walking away from the Church, or coming back to it, she said.

“We understand the truth and want to help bring her to Christ, who can heal that wound. We can walk with her along the journey to healing and hope. We can give her the gift of listening and compassion.”

More information on Project Rachel in the Diocese of Harrisburg can be found at www.hbgdiocese.org/respectlife, by calling 717-857-2282 or by emailing prm@hbgdiocese.org.