‘Radical Acts of Love’ Will End Abortion, Pro-Life Activist Tells Symposium at Our Lady of the Visitation Parish

If the pro-life movement can convince people that an unborn child is human, we win the fight, right?

According to Dr. Monica Miller, this is not reality.

Speaking at the Faith, Family & Life Symposium at Our Lady of the Visitation Parish in Shippensburg on Sept. 21, Dr. Miller told those in attendance why. Backed by 40-plus years of experience in the pro-life movement, she told how Roe vs. Wade was never concerned with the biological status of the unborn.

Dr. Miller is the founder and director of Citizens for a Pro-Life Society, and has been active in the pro-life movement since 1976. She is a Professor of Theology at Madonna University in Livonia, Mich., and author of several books.

“Roe vs. Wade had to do two things to get to its goal. Number one, it had to claim that the unborn child is not a person.” Secondly, it had to establish the right to privacy, which is a “sphere of privacy written exclusively around the woman. She alone in her privacy sphere is permitted to make a life or death decision about her unborn child.” Dr. Miller continued, “Who is excluded from that sphere? The husband, boyfriends, parents, grandparents; as if indeed they didn’t exist.”

The theme of the pro-life movement and role of men in society today were central to the day’s talks. Father Dwight Schlaline, pastor of Our Lady of the Visitation, noted, “Speaking for myself as a man (and now a priest) living in this culture, and also from my experiences relating to other men and women, it seems that there is a general yearning for men to ‘man-up’ today. I think this is true regardless of which sector of society you come from.

“My experience is that most people have a ‘father-wound’ – which is an indication that many men are not succeeding in their relationships with their children and wives,” he continued. “Many people are aborting their unborn children because a male figure in their life is either pressuring them to do so or otherwise failing to protect and provide.

“The ‘mother-wound’ that some people experience is also real,” he said. “But in our day and age, the ‘mother-wound’ does not seem as prevalent or as harmful as the ‘father-wound.’ …. People are hurting. They are hurting because of the breakdown of the family that started back in the Industrial Revolution. Fathers in particular have a unique role in remedying this hurt, but they may not know what their role is or how to use it.” 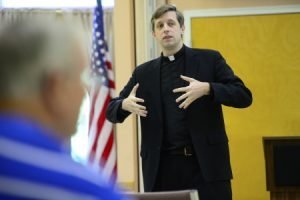 Father Dwight Schlaline, pastor of Our Lady of the Visitation Parish in Shippensburg, speaks on ways for men to reclaim their role as provider and protector.

In her talk, Dr. Miller said “Abortion fragments our human communion.” Pointing to Genesis 2 where God declares it is not good for the man to be alone, she remarked that “To correct the problem of original solitude, we have the creation of the woman. Doctrinally, theologically, spiritually, biblically, philosophically; the woman is the center of human communion. It’s no accident that Satan goes after her first. ‘If I get her I get the whole deal.’ Adam comes with her and what’s the first thing that comes after sin? Dis-integration.”

Those in attendance listened in stunned silence as Dr. Miller relayed the discovery she and others made in 1988 of disposed aborted babies at the Michigan Avenue Medical Center in Illinois. “A lot of the bags had the woman’s name, the date of the abortion, the gestational age of the baby, and sometimes even the abortionist’s name.”

Some of those bags contained the name of Ulrich Klopfer, who recently made the news when it was reported he had kept the preserved remains of some 2,246 aborted babies at his home. This discovery was made by family members following his death at 75 earlier this month.

Dr. Miller concluded with advice for those involved locally in the pro-life movement. “Our role, our battle, our quest as pro-lifers is to restore. Ultimately abortion is the result of a deep spiritual crisis. It’s not just a political issue, it’s not just a philosophy, it’s not a legal ruling, it’s a spiritual crisis about what does it mean to be human. What is our relationship with God, the creator of life? The only way I believe we are going to overcome this crisis is by the performance of radical acts of love. You’re not going to end abortion by thinking pro-life thoughts, but by doing pro-life deeds.”

Long time pro-life advocate Brad DeFlumeri, who serves as Our Lady of the Visitation Parish’s Pro-Life Ministry Secretary, helped organize the event. The purpose was to “inculcate into the local pro-life and parish community a better understanding of the pro-life movement and to emphasis the importance of a pro-life perspective and the destabilizing affect of Roe vs. Wade and the right to abortion on family, local community, masculinity, and femininity.”

(Pete Socks is a member of Sacred Heart of Jesus Parish in Conewago and a freelance reporter for The Witness.)

By Pete Socks, Special to The Witness