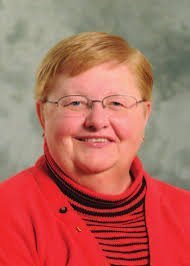 After a lifetime of service, the Chancellor for the Diocese of Harrisburg, Dr. Carol L. Houghton, STD, JCD, is starting her next life chapter. Dr. Houghton retired from the Diocese on June 30, but not before reflecting back on her 33 years of service.

“I started in a part-time role in June 1986. I was teaching full-time at Mount St. Mary’s Seminary at the time. When I was working part-time, I started in the Tribunal as a Defender of the Bond and then I became a Judge,” said Houghton. “My entire time with the Diocese has been in the Tribunal.”

In April 1990, at the request of the late Bishop Nicholas C. Dattilo, Houghton came full-time to the Diocese and became chancellor and has remained in this position for 29 years.

“As the chancellor, I oversaw the historical archives, although the Diocesan archivist had all the daily responsibilities for the archives. By universal law, the chancellor is also the Diocesan notary. Any formal act of the bishop is notarized by the chancellor. I keep the official seal of the Diocese,” Houghton explained.

In addition to her responsibilities as chancellor and as a defender of the bond for the Tribunal, Houghton also recalled her time as a Censor Librorum fondly. “I would review books, prayers and hymns that individuals wanted published,” she said.

During her tenure, Houghton was also involved with the very difficult task of merging parishes.

“That was a large undertaking,” she said.

Lancaster, Rome, Texas and Back

Houghton, a native of Lancaster, first started her higher education at Lancaster Theological Seminary, intending to be a Protestant minister. Instead of ending seminary as a minister, she came out Catholic and then traveled to the Pontifical University of Saint Thomas Aquinas, or Angelicum, in Rome.

“At the time, I only planned to stay for three years to get my Doctor of Sacred Theology degree,” said Houghton. During her studies, Houghton met with a bishop from El Paso, Texas, who encouraged her to also pursue a Canon Law degree. “I stayed for an additional three years, six in total, to also get my Doctorate of Canon Law.”

Once she completed her education, Houghton worked in the Chancery and Tribunal offices for the Diocese of El Paso for three years, before returning to the Pennsylvania area.

“I came back to the area and taught at Mount St. Mary’s Seminary,” said Houghton. “I taught Scripture and Canon Law full-time for five years. After I came to the Diocese in a full-time capacity, I didn’t teach for two years. Then, the Mount needed someone to teach Canon Law, so with the bishop’s approval, I taught Canon Law part-time at the Mount for the next 23 years.”

Retiring from the Diocese is truly a bittersweet moment for Houghton, who expressed her deep joy to have been part of this faith community for so long.

“I have a lot of good memories. There have been some difficult times we’ve gone through, but I think that’s true of any ride; it’s had its ups and downs. I connect those good times to the people I’ve worked with; to the bishops, the staff and the people we have served,” she said. “I didn’t look at this as work, but rather as being part of the larger picture. I looked at this as collaborative ministry. Like St. Paul who says we are not all the hand, or the foot, or the ear, but rather all parts of the one Body of Christ. We’ve all worked together to bring good to the people of the Diocese.”

Houghton added she is planning to take the summer off and enjoy it, and is open to whatever path God has in store for her. As a teacher at heart, Houghton had one last message to share before closing this chapter.

“Just remember that Jesus, the Good Shepherd, is with us always, and He loves us more than we know. He asks each of us to do what we can for Him in this life, with the gifts He has given us, and to trust Him always. I had a sign in my office for many years that read, ‘Let your Faith be bigger than your Fear.’ That’s the message I think I would like to share with others.”

On behalf of all those in the Diocese of Harrisburg, thank you, Carol, for your dedicated service.