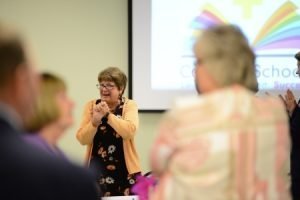 Livia Riley reacts to a surprise party, where principals thanked her for her 11 years as Diocesan Superintendent.

In 1974, Livia Riley was a first-year teacher at St. Anthony of Padua School in Lancaster, welcoming 40 students into her classroom and wondering what God had in store for her.

“I’ll never forget that first day,” said Riley. “I was 21 years old. I stopped on the landing between the second and third floors, and stood there thinking, ‘I wonder where this will lead me.’”

“Then I went to my desk in the fourth-grade classroom. The bell rang, and 40 kids came in. It was the day I said ‘yes’ to God.”

Riley, who has served as Diocesan Superintendent since 2008, is retiring at the end of this month after 37 years in Catholic education.

“I’ve always felt like I was a daughter of the Diocese,” said Riley. She taught at the former St. Anthony’s for all but five years between 1974 and 1991 – the hiatus spent in public school to teach in special education in order to earn permanent certification.

“When I left St. Anne’s as principal, one of my students said, ‘Mrs. Riley, you’re climbing the corporate ladder to heaven,’” she recalled. “Every move just seemed like a natural progression to where I was meant to be.”

Sister Marilou MacDonald, IHM, and Sister Sue Ann Steves, IHM, her immediate predecessors as Superintendent, “were wonderful mentors to me when I was a principal and when we were fellow colleagues at the Diocesan Center,” Riley said.

“I feel like I was always encouraged by the administration here at the Diocese to think, ‘If there’s an opportunity, then you should apply,’” said Riley, the first layperson to serve as Superintendent.

A Call to Help People

Riley didn’t set out to be a Catholic school teacher. Instead, she’d intended to follow in her father’s business footsteps.

“My father was an accountant. He and my mother had four children, all girls. His hope was that one of us would take over his business. Being the oldest, I thought I would try it,” Riley said.

She majored in business at York College, and took a job at an electronics company in New Cumberland after earning an associate’s degree in accounting.

“It didn’t take long to realize that accounting was just not for me,” she said. “I guess I should have listened to my mother from the start. She knew I needed something else.”

Riley returned to York College to focus on behavioral science. During her senior year, she interned at the former Springettsbury Elementary School in York, where she worked with children with emotional challenges.

“I enjoyed it, because I wanted to do something that would help people,” she said.

She went to Millersville University for graduate school, and focused on special education. While working on her teaching certificate, she applied for an opening at St. Anthony School, in her home parish.

“You eventually wind up on the path where God wants you to be,” Riley remarked. “My father-in-law was the maintenance man at St. Anthony’s, and he’s the one who told me they were looking for a teacher that would be the start to my work in the Diocese.”

As Diocesan Superintendent, Riley was tasked with efforts to strengthen curriculum and Catholic identity.

“It was critical work, and very important to me,” she said.

During Riley’s tenure, the Diocese developed and grew the wide-area network (WAN), which connects the schools for real-time video-conferencing and distance learning. The launch of the WAN in 2010 was funded by a $1.75 million grant through the Capital Area Intermediate Unit and Lancaster-Lebanon Intermediate Unit 13. 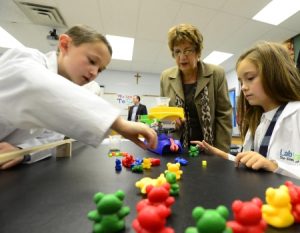 Students at St. Theresa School in New Cumberland demonstrate a science experiment for Livia Riley in the school’s research-based lab in this 2014 photo.

The WAN has contributed to the STREAM (science, technology, religion, engineering, arts and mathematics) initiatives flourishing throughout Diocesan schools. “These developments in technology and new ways of thinking ensure that our students are ready for success in higher education and in jobs,” Riley said.

Another highlight for Riley is the annual Golden Apple Awards. Now in its 14th year, the program recognizes Catholic school educators for their professional excellence and commitment.

“The program gives us an opportunity to showcase our dedicated educators,” Riley said. “We’re very grateful for the generosity of the Donahue Family Foundation for making the program possible.”

Riley said she is most proud of the Diocese’s Instructional Support Program, which has implemented new programs and expanded existing ones to support children with learning disabilities and special needs.

“I think that’s the program I’m most proud of, because of my background in special education,” Riley reflected. “We now have a Diocesan Instructional Support Committee that helps fund our Autism Spectrum Disorder Program that educates teachers in working with students who have Autism.”

She said the greatest attributes of the Diocesan schools are “their family atmosphere, dedicated staff and authentic Catholic identity…. Our students always shine, and we have the privilege of educating the whole child, academically and spiritually.”

“I’m so proud of our principals and teachers, because they see this as a vocation. I am so grateful for their dedication,” she said.

She spoke highly of the staff in the Department for Catholic Schools, saying “None of the programs we’ve undertaken could have been accomplished without their support…. I’m going to miss everyone in the office, because we were a team and family.”

Riley also expressed her gratitude for her husband and two sons for their support of her work in Catholic education.

“Retirement is bittersweet,” she said, with tears in her eyes. “I hope I served everyone well. I know I’m leaving with our schools in a good place. They are flourishing, and their Catholic identity is intact.”

For more information about our Catholic Schools, visit https://www.hbgdiocese.org/catholic-schools/.