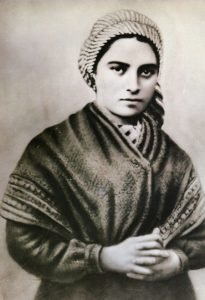 Bernadette Soubirous was born in Lourdes, France, on January 7, 1844. Impoverished, the family lived in a dank former prison and Bernadette contracted cholera and suffered lifelong asthma which may have contributed to her four-foot-seven-inch stature and little schooling. On February 11, 1858, while gathering wood with her sisters, she heard a voice and saw a vision of a beautiful lady in a niche in the grotto of Massabielle. No one believed Bernadette’s account. Her parents and authorities forbade her to return to the grotto, but she did. The lady asked her to return on 14 consecutive days. On February 25, as an act of penance, the lady asked Bernadette “to drink of the water of the spring, to wash in it and to eat of the herb that grew there.”  The mud became a spring and flows to this day. On March 2, the lady instructed that “a chapel should be built and a procession formed.”  Then, on March 25, Bernadette asked the lady her name and she answered, “I am the Immaculate Conception.” Because Bernadette was a simple soul, the bishop especially could not believe what she said because the dogma of the Immaculate Conception had not yet been proclaimed.

Eventually, thousands came to the grotto. Bernadette entered the Sisters of Charity at Nevers, France, and became known as Sister Marie-Bernard. While there, she contracted tuberculosis of the lungs and bone. When asked about the apparitions, she replied, “The Virgin used me as a broom to remove dust. When the work is done, the broom is put behind the door again.” Bernadette died on April 16, 1879, at age 35. Her incorrupt body, encased in wax, lies in a gold and crystal reliquary in the Chapel of St. Bernadette in the Motherhouse at Nevers. She was canonized by Pope Pius XI on December 8, 1933, the 75th anniversary of the dogma of the Immaculate Conception.