Girl and Boy Scouts, American Heritage Girls and Venture Crew troops gather for a group photo with Bishop Ronald Gainer, who celebrated the Scout Mass for them on June 16.

Celebrating the achievements of Diocesan youth was on full display on Sunday, June 16 with the annual Scout Mass. Bishop Ronald Gainer congratulated and distributed awards to members of the Diocese’s Girl and Boy Scouts, American Heritage Girls and Venture Crew troops. Parents, family and friends came out to congratulate the scouts for their hard work and achievements in receiving awards directly related to their Catholic faith.

Joanna Reynolds, chairperson for the Diocesan Catholic Committee on Scouting (DCCS), a program supported by the Diocesan Annual Campaign, explained that there are many awards and recognitions the scouts could earn related to their faith, including the Pope Pius XII award.

“The Pope Pius XII (award) is for ninth grade and up and talks about your role as a Catholic and your religious life. It really develops a sense of religion in the scouts,” said Reynolds. This awards project specifically includes teaching youth how they can be involved in their parish after high school.

Another award Reynolds has worked with is the Ad Altari Dei program.

“In the Ad Altari Dei Program, we talk about how Scouting Law relates to the seven Sacraments and living a good and pious Catholic life,” Reynolds said. “I’ve done a number of the Ad Altari Dei and the kids get very involved in that. They learn much more about their religion and the significance of the sacraments. What the Mass means in the terms of how it relates to their daily lives. I think it’s a really important program for the formation of good adults in the community that can bring them closer in touch with their faith and develop those good Catholics.”

“It makes them think about what happens after high school. They research different jobs and interview people in the jobs they think they might want,” Lehman explained. “They then come back and tell me how, if they had that job, their role could be useful to the parish and community. We also talk about the volunteer opportunities with the parish to show the youth that they can stay involved with the parish after they graduate.” 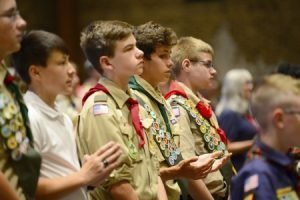 Boy Scouts are seen during the Diocese’s Scout Mass on June 16 at Good Shepherd Church in Camp Hill.

“The most important thing is that it just connects all of our Catholic youth to their faith, along with scouting,” said Liz Mahoney, who serves on the DCCS. “The actual relationship with scouting and the Catholic Church has gone on for over a hundred years, and it continues to remain strong. These programs allow all of these scouts that connection where they can feel comfortable talking about their faith. It’s one of the programs to keep our youth interested in their Catholic faith.”

During his homily, Bishop Gainer told the scouts that, “Scouting is an important ministry in the life of our Diocese.” He added that on this Holy Trinity Sunday, we should remember that the Trinity is not a puzzle to figure out, but rather is about experiencing the love the Christ.

Rosa Azzato and Michael Astfalk are two such scouts that have been experiencing their scouting journeys for many years.

“I really like bonding with all my friends in Girl Scouts and learning new activities,” said Azzato. “You can do religious activities and learn about your faith and also fun activities like volunteering at food banks.” Azzato, a member of Holy Name of Jesus Parish in Harrisburg, has been involved with Girl Scouts since first grade. She added her experiences in scouts played a role in her decision to attend college for Occupational Therapy.

“I’ve been in Boy Scouts since I was a Tiger in kindergarten, so it’s been a long time,” said Astfalk, a member of Seven Sorrows of the Blessed Virgin Mary Parish in Middletown. “What I really enjoy is going out, making friends, being with new people and getting to know my fellow scouts at different camp outs and events. My favorite thing to do as a scout is to teach them (younger scouts) the ropes and watch them grow and develop. I’ve learned a lot. If you’re not trying it, you could be missing out on something great.”

“It’s tremendously important to the Diocese. It keeps the kids focused and gives them a moral compass to follow,” Lehman said.

“I think these programs do what really isn’t present elsewhere in Scouting by giving back to the community through a person’s religion, for us, Catholicism,” said Reynolds. “One of the major tenets is belief in God. When the Scout gives the Scout Law, that’s one of the tenets they talk about. It’s just a very important program for the Diocese to recognize these kids. They really learn a lot about their religion.”

Bishop Gainer distributed patches, medals and awards in recognition of the Scouts’ faith, hard work and dedicated service to the community. Catholic Scouting is under the auspices of the Diocesan Office of Youth and Young Ministry. This office, through the generous support of contributors to the Diocesan Annual Campaign, offers support to the Diocesan Catholic Committee on Scouting (DCCS) by providing resources and emblem recognition programs for Scouts and their pack leaders. The DCCS also provides guidance, direction and leadership for the scouting programs in the Diocese of Harrisburg. For more information, visit www.hbgdiocese.org/youth-and-young-adults/catholic-scouting.

Questions on the Diocesan Annual Campaign should be directed to the Diocesan Office of Stewardship and Development by calling 717-657-4804, ext. 336, or via email at development@hbgdiocese.org.

(To learn more about the Diocesan Annual Campaign, including how you can support the important ministries of the Diocese, visit www.hbgdiocese.org/giving/diocesan-annual-campaign.)