United States Secretary of Education Betsy DeVos visited the Cathedral campus of Harrisburg Catholic Elementary School on Sept. 19, along with Pennsylvania Speaker of the House Mike Turzai, to talk about school choice and freedom of education.

Seventh-grade teacher Johnnie Hicks and his class presented a special tribute for Secretary DeVos, including a geographical lesson involving her home town of Holland, Mich. After her time with the seventh-graders, Secretary DeVos visited the younger students to help with their learning experience.

After reading to a class of preschoolers, she offered a different kind of message during a roundtable discussion on freedom of education. Several lawmakers and community leaders took part in the conversation, held in Cathedral Hall.

“In Pennsylvania, you have some robust choices that have been offered to families, and there has been much greater demand than you have been able to satisfy,” she said. 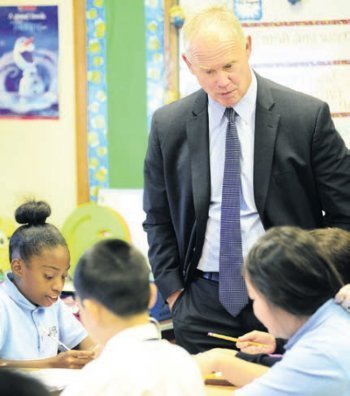 Pennsylvania Speaker of the House Mike Turzai talks to Ja’Tore Jackson, Andrew Nguyen and GiaHan Thai about their classroom lessons.

Speaker Turzai had pushed for a $100-million increase in the state’s ETIC program, but it was vetoed by Governor Tom Wolfe. A $25-million increase was salvaged during budget negotiations this past June.

Secretary DeVos also spoke about a proposed initiative of the United States Department of Education, the Education Freedom Scholarship Program. Introduced in the House and Senate, the EFS program is along the same lines as the EITC program, and would create a $5 billion annual federal tax credit for voluntary donations to state-based scholarship programs.

The proposed program would be entirely funded by private donations, and would not take away any money from public schools, students or teachers, the secretary said.

In addition to lawmakers and community leaders, the roundtable drew educational leaders touting the benefits of education freedom for students in Catholic, Protestant, Methodist, Baptist, Jewish and Montessori schools – from inner-city, suburban and rural locales.

Among the speakers was Thalia McClenton, whose sons Christian and Joshua attend Harrisburg Catholic Elementary School. McClenton said their education wouldn’t be possible without funding from the EITC program.

“I’m a single mom. I didn’t know how I was going to afford it,” McClenton told the roundtable audience, re-calling her first meeting with school officials. “From the time I walked in the door and met with the principal, I felt like a burden was lifted.”

“I have to make sure they get the quality education that I know they deserve; not only my children, but everyone else’s kids,” McClenton said. “These kids are our future. I want my kids to succeed, to be better than me. I thank God for the programs that help with the tuition, because if it wasn’t for that help, they wouldn’t be here.” 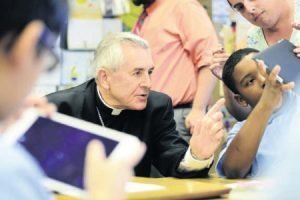 Bishop Ronald Gainer interacts with students, including Kaseem Roland, as they use technology in the classroom.

Secretary DeVos said even more families could be helped through the Education Freedom Scholarship Program.

“Pennsylvania would be beneficiaries if every state participated and all the contributions were made to that $5 billion cap. Pennsylvania would be receiving about $156-million annually to add to the programs and the opportunities that you already created for families here,” she said.

“School choice is a difficult topic to discuss today,” said Sean McAleer, Education Director of the Pennsylvania Catholic Conference. “There are many individuals that oppose giving parents options for their children in K-12 education. Often, the school choice message gets twisted by our opponents. The single message school choice stands for is ‘putting children first’ in all educational decision making.”

(Al Gnoza is the Communications Director of the Pennsylvania Catholic Conference. Visit www.pacatholic.org for information and to join its advocacy network. Visit www.ed.gov/freedom to learn more about the Education Freedom Scholarships proposal.)

By Al Gnoza, Special to The Witness