Bishop Ronald Gainer and several priests concelebrate Holy Mass for the 100th anniversary of the Sisters of Sts. Cyril and Methodius in Danville on Sept. 15.

The Sisters of Saints Cyril and Methodius, founded in 1909 in Scranton, Pa., had searched for 10 years for a permanent home for the growing number of Sisters in their congregation. The Sisters learned of a property for sale in Danville in November 1918. Father Thomas F.X. Dougherty was pastor of St. Joseph Parish in Danville and was able to help the Sisters with information about the property.

The estate consisted of a 44-room home, stables, barns, greenhouses, a farmhouse and a liveryman’s house on 187 acres of land. Known as “Castle Grove,” the mansion had been built in 1867 by John Grove, Sr., for his two sons, Michael and John Grove, Jr. After the death of the estate’s next owners, Caroline Grove Bennett and John Bennett, the estate was abandoned in 1905. Just after the end of World War I, John’s second wife listed the property for sale. On June 7, 1919, the sale to the Sisters of Saints Cyril and Methodius was made final. The estate had been abandoned for 14 years and needed a significant amount of attention. The Sisters moved to Danville knowing they had a great deal of work ahead of them but were overjoyed by a place to call their own.

When a family moves to a city, town or borough, its members spend some time determining how they can become part of the community’s life and make a significant contribution to their new home. Since the Sisters of Saints Cyril and Methodius arrived in Danville in 1919, we have endeavored to become a part of the community and to share our time, talents and expertise in a variety of ways, notably in education, health care and spirituality.

Our first successful venture in 1920 was the establishment of an elementary school housed in Castle Grove, the building on the property we had purchased. The Slovak Girl’s Academy for boarding and day students eventually moved from the Villa to a building constructed for just that purpose, later to be called St. Cyril Academy. Until 1999, the Academy educated thousands of young women, instilling the attitude of generous self-giving contained in the school motto: “Enter to learn; leave to serve.” 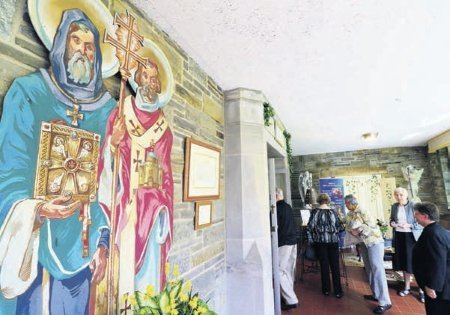 Worshipers pass by an image of Saints Cyril and Methodius at the Basilica in Danville. Born in present-day Greece in the early 800s, the brothers were theologians and missionaries who influenced the religious and cultural develop- ment of the Slavic people.

For much of the 77-year history of St. Cyril Academy, theater was the tool for reaching out to people. Beginning with adult shows at Christmas and Easter and Traveling Adult Theater for 10 years, in later years the students were annually directed in children’s theater, performing a musical play for busloads of area elementary school students. Even today, those students-turned-adults happily remember the joy of seeing Cinderella or Snow White or Winnie the Pooh performed in the darkened auditorium. In addition, the Raggedy Ann Players Traveling Theater performed more than 500 shows in their 25-year history of entertaining children.

Before translating became a digital exercise, the international students of the Academy were often asked to translate for the Geisinger Medical Center when patients from Haiti, the Dominican Republic, Mexico or other Central American countries needed to be understood.

Opening in 1971 and continuing through 2005, the Villa Conservatory of Music was the place to learn piano.

From 1977 to 1992, the Sisters of Saints Cyril and Methodius taught at St. Joseph School in Danville. Taking up where our Sisters, Servants of the Immaculate Heart of Mary (IHM) predecessors left off, the Sisters filled the roles of principal and teachers, directors and teachers of religious education and even pastoral assistant for the parish.

Begun in 1977 as the Villa Preschool and moved in 1999 from the Villa to the St. Cyril Academy building, the St. Cyril Preschool and Kindergarten is a Catholic environment which provides very young children a firm foundation upon which to build their education. Classroom work and activities are structured to tap the greatest potential of the students. The Summer Stage program for children 5-12 continues the Academy’s well-earned tradition of excellence in theater.

Our health care facilities are a boon to the Danville area. It all began March 19, 1962, when Maria Joseph Manor opened as a home for the aging. Today, Maria Joseph Continuing Care Community offers, according to the mission statement, “a welcoming and secure environment, where the lives of senior adults and their families are enhanced with compassionate and professional care.” 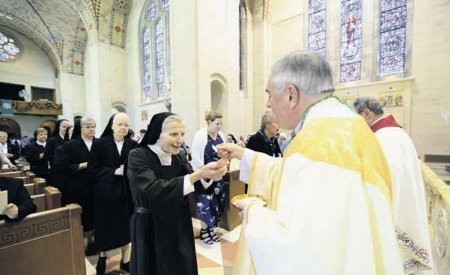 Discalced Carmelite Sister Angela Pikus receives Holy Communion from Bishop Ronald Gainer. The Discalced Carmelites are one of four religious communities who live at the Sisters of Cyril and Methodius’ Maria Hall in Danville.

Since 1970, Maria Hall has been the home for our “retired” Sisters of Saints Cyril and Methodius, and for more than 15 years, a residential hospice unit on the fourth floor, administered initially by Columbia-Montour Home Health and Hospice, has welcomed the dying and their families into our home. Maria Hall is also home to Sisters from four other religious communities: The Danville Carmelites, the Good Shepherd Sisters, the Contemplative Good Shepherd Sisters, and the Sisters of Notre Dame de Namur.

An integral part of health care is chaplaincy, and the Sisters of Saints Cyril and Methodius have ministered over the years in pastoral care not only in our facilities at Maria Joseph Manor and Emmanuel Center, but in the Geisinger Medical Center and the Danville State Hospital.

Villa Sacred Heart has been recognized and utilized as a place for religious gatherings and events since 1909, especially since the dedication of the Motherhouse Chapel-turned Basilica of Saints Cyril and Methodius in 1939. Formally established in 1999, an important sponsored ministry of the congregation today is the St. Cyril Spiritual Center. The center’s mission statement presents its purpose: “Within a serene setting of natural beauty, the center offers retreats, spiritual direction and a quiet place for individuals or hosted groups ‘so that the Gospel vision of the Kingdom may be fulfilled in us and in those we serve.’” The center provides access to the Basilica of Saints Cyril and Methodius; a perpetual adoration chapel; a hermitage; a Chartres-style labyrinth; a library containing religious books, audio tapes and videos; and overnight accommodations for up to 90 persons.

Programs and retreats annually include personal or group retreats, silent and directed retreats, guided or preached retreats, reflection days during Advent and Lent, and spiritual direction.

In recent years, the spiritual center has been able to share our facilities with other denominations for their spiritual and educational activities. The Society of the Holy Trinity, Lutheran pastors, hold their yearly retreat at the spiritual center. Methodist women also make their retreat here. The Stevenson School of Ministry comes regularly to provide classes for men and women discerning the diaconate or priesthood in the Episcopal Church. Men’s and women’s Tres Dias and the women’s Tres Dias Fiesta group spend weekends here. Tres Dias is a three-day intensive Christian retreat experience similar to the Cursillo program. Our ecumenical outreach has brought us many blessings.

No doubt many things have been missed in this litany. We have been and continue to be part of the fabric of Danville. Our 100-year home has been good to us, as we have tried to be good for it.

By Sister Bernadette Marie Ondus, SS.C.M., Special to The Witness