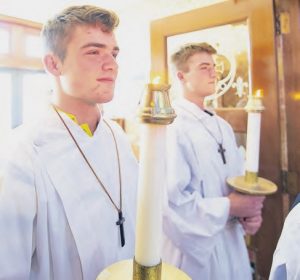 Students, faculty, parents and graduates of St. Rose of Lima School in Thomasville celebrated the school’s 100th anniversary during a Mass and a dinner in York on April 27. The centennial was highlighted by Mass celebrated by Bishop Ronald Gainer.

The school was founded in September of 1919 by the Sisters of St. Joseph, and originally located adjacent to the parish church in York, a few blocks from the fairgrounds. In 2001, St. Rose of Lima School moved to its current location in Thomasville, a suburban area west of the city.

Congratulating the school community on the 100th anniversary, Bishop Gainer told the congregation “Your ancestors truly went out on a limb to finance the school.” World War II had just ended, and a flu epidemic a year earlier killed more than half a million people.

“We owe a tremendous debt of gratitude to those who faithfully went before us,” he said. 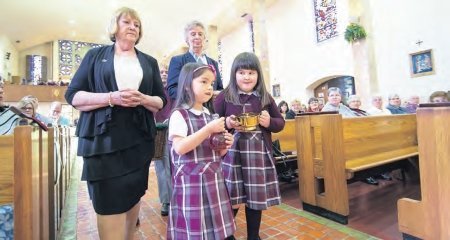 Celebrating the anniversary Mass a week after Easter Sunday, the bishop said “We cannot with our limited human understanding fully grasp and understand what happens at the Resurrection…. We cannot explain or totally understand it but we do know that Christ’s rising does give us the light of salvation.

“After the apostles failed him by not believing that he rose, when he does appear to them, he is not angry or disappointed with them. He says to them, ‘Peace be with you,’” Bishop Gainer said.  “He wanted to bring peace to his disciples. And we too are disciples of Christ, still learning…. He wants us to be at peace. We were sent into this world to be his witnesses.”

(A feature piece on St. Rose of Lima School will appear in an upcoming edition of The Catholic Witness. For information on the school, visit www.stroseschoolpa.org or call 717-792-0889.)