Ministry Extends to 30 Parishes in Diocese

A prevalent men’s ministry is growing within the Diocese of Harrisburg and attracting several thousand to its 26 weekly meetings for enlightenment and camaraderie to live as Catholic men.

Now a successful and popular program, it was initially met with a negative reaction.

When Steve Bollman, founder of the national That Man Is You ministry, first got the idea for a weekly program of a video presentation and small group discussion for Catholic men, he asked his then-pastor, “How many do you think we’re going to get?” 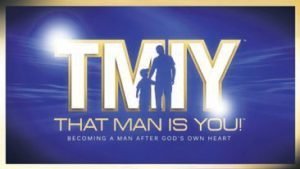 “None,” his priest replied.

“Catholic men just aren’t interested in this,” they said.

Now in 700 parishes across the country – including 30 in the Diocese of Harrisburg – That Man Is You is drawing scores of Catholic men for an honest and practical examination of how they can handle life’s everyday pressures and struggles to be the man God called them to be.

“What men have responded to in this program is just the reality of family versus work pressures…and trying to live a Godly life in a culture that is not,” Bollman said. “Many men feel isolated. When you have men with true desires to be good husbands and fathers, they need a place where they honestly see what they can do to live the life they want to live while connecting with other men on that journey.”

That Man is You focuses on the three critical relationships in a man’s life: his relationship with God, his spouse and his children.

“What I think is engaging the men is that the program appeals to their nature, who they are, what their experiences are,” said John Rossi, who has coordinated the program at St. Theresa Parish in New Cumberland for six years. “Even if they’re not theologically formed in the faith, and although they’re at different stages in their life, Jesus desires to meet them where they are and take them forward.”

Compelling and practical content draws men to the program, and ultimately keeps them coming back, program leaders and coordinators say.

That Man is You addresses specific ways in which a man can transform himself, his marriage and his family life in the following areas: honor your wedding vows, use money for other people, give God some of your time, set your mind on the things above, find God in yourself, find God in other people, and practice superabundant mercy.

The concrete examples are applied and adapted to meet men at any age and stage in life.

“If you’re not married, how do you honor your wedding vows? By living the celibate life today to honor your future spouse,” Bollman offered as an example. “If a man doesn’t have kids, we can adapt the seven steps to benefit his future parenting role.”

Rossi said the program is an answer to the crisis of male leadership in the culture.

Rossi was instrumental in working to bring the program to the Diocese of Harrisburg after hearing about it from a student at Franciscan University in Steubenville.

“The program has exploded here in the Diocese,” he said. “Our first week at St. Theresa’s six years ago, we had 65 men. By January, we had over 200 registered. There were men coming from other parishes, and then we went out to give introductions for other parishes that wanted to start it. We still have a core group of 85-90 men who meet at St. Theresa’s every Saturday, and it’s still growing.”

“Through this program, men have taken a more active role in their families,” Rossi said. “Those who are extremely busy with work try to spend more time at home with their wives and families. I see more men from That Man is You at daily Mass and praying the Rosary. Those things are strengthening the family,” he said. 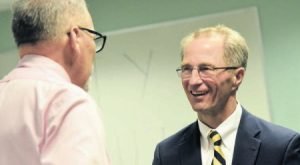 Steve Bollman speaks with parish facilitators of the That Man is You program during a visit to St. Theresa Parish in New Cumberland in June of this year.

Weekly meetings are an hour and a half in length. They begin with time for men to socialize, often over refreshments, and include a 20-minute video presentation followed by 30 minutes of small group discussion.

“That Man is You helps build trust and friendships, and guys start to see that others are struggling with the same things, and soon they’re open to sharing,” said Rossi. “It’s humbling to sit with men who are willing to talk about things. It’s strengthening.”

Another motivator of the group discussion is familiarity with men of the parish.

“You’re participating with men that you see at Mass or in the parish,” said Bill Benning, who facilitates the program at St. Katharine Drexel Parish in Mechanicsburg. “The walls come down, and over time they feel comfortable discussing their thoughts and concerns.”

“That Man is You gives men a place where they feel comfortable sharing and expressing their feelings,” Benning said. “I think that’s why they keep coming back throughout each 26-week session….. It fits a niche that guys are looking for, once they make themselves available to it. Once a guy who wants to live his faith finds an avenue with others to express that desire, he opens up.”

That Man is You integrates today’s pressures and issues with the teachings of the Church, the lives of the saints and the latest in scientific discovery. It builds camaraderie and strengthens family life as it bolsters the men who attend the program.

“Men start to clean up addictions, start to spend more time with family and get work under control. When you look at the parishes, the men are more involved in parish life. It’s amazing how it all comes together,” Bollman said.

“I think the program is successful because it gives you practical ways to apply the principles to your daily life with the seven steps in the program,” Rossi said. “They’re very applicable and doable. Presenters and topics are honest and powerful, and they bring out the tough stuff in life and marriage and family.”

“What does it mean to be a male servant leader, and what does it look like to be that man for your family? That Man is You addresses it, and assists men in taking an active role instead of floating along with the stream,” he said.

That Man is You has grown to 700 parishes across the country.

Even as it expands into additional parishes, Bollman said, many still start out with the same uncertainty he first faced: “It won’t work here.”

“But it will, it does,” he said. “Men are hungry for this. If you offer it, it will happen. Men want to be good men. They want to step up. They just need a pathway.”

(Men can join fall sessions that are underway in parishes throughout the Diocese by contacting parish-level facilitators. For general information about the program, visit www.paradisusdei.org/that-man-is-you.)