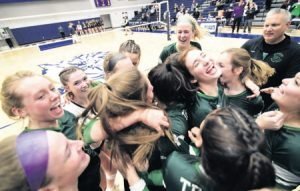 You can set your clock the first weekend of November to the fact that Delone Catholic will be play­ing for a District 3 Class 2A vol­leyball championship, and will be the favorite. In fact, the Squirettes had won the last three in a row and have gone deep into the state playoffs the past few years, so in this year’s final against the Trin­ity Shamrocks at Dallastown High School on Nov. 2, nobody would call you crazy if you thought De­lone was the poised to capture another crown. Back on Oct. 7, the Squirettes had beaten Trinity for the Rocks’ lone loss this season and enough to make Trinity worry a bit.

Delone jumped out to a 7-2 lead in the first set of the district championship, and Trinity was not the aggressor in the match’s early going. After a timely timeout by veteran Coach John Barrick, the Shamrocks started doing what they do well – defend the net and pass the ball. Tied at 22, the Shamrocks rose to the occasion to win three of the final four points to capture the first set over the seasoned and playoff-tested Squirettes. After a close second set, again with the Rocks’ winning the pressure-packed points, Trinity cruised in the third set to win their first District 3 title in vol­leyball.

Defense wins champion­ships, they say, and Trinity proved that to be true, domi­nating the net and neutralizing Delone’s super outside hitters, Maddie Clabaugh and Brooke Lawyer. Trinity’s Lauren Trumpy, Katie Sajer and Gracie Britten had 14 blocks be­tween them and few Delone strikes got though with­out a Trinity hand on them. Trinity’s 25-22, 25-19 and 25-15 win sets them up as a high seed to make a run at the PIAA state champion­ship on Nov. 16 at Cumberland Valley High School.

“We are a well-rounded team and we are confident,” senior captain Katie Sajer said after the team’s joyous celebration of the program’s first district gold in volleyball.

By Chris Heisey, The Catholic Witness